You Are Here: Home → Christians in Gaza—A Little-Known, Embattled Minority 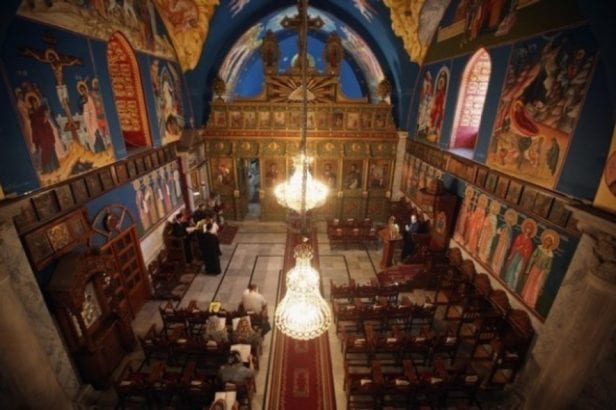 The number of Christians in Gaza has been reduced to just about 1,000… Israeli policies are causing suffering and impeding their ability to visit Christian holy sites…

Who are the Christians of Gaza and how are they coping?

Very few Christians live in heavily Muslim Gaza, just around 1,000. They mostly live in the City of Gaza, clustered in neighborhoods surrounding the three main churches and other religious organizations. These include Orthodox, Baptist, Anglican, and Catholic, in addition to an Evangelical hospital. Gaza Christians freely practice their faith and today openly celebrate their holidays. They work for the government, in the private sector, and according to the Palestinian Declaration of Independence, they are entitled to the same rights as Muslim Palestinians. Christians are allocated a proportion of seats in the Legislative Council according to the quota system that gives them a presence in governing. Slightly less than half the Gaza Christian population works in the medical, educational, engineering, and law sectors. Churches, too, are involved in relief and educational services, including the provision of medication and social services.

Despite these positive signs of life for Christians living in Gaza, there is a sense that they are existing under a state of siege. The press, namely Christian Today, reports that “severe conditions in Gaza are leaving the struggling Christian community open to the temptations of ‘an extremism which does not differentiate between race and religion.’”

This is a reference to Israeli suppression of Christians in Gaza, who have been prevented from visiting holy sites in Bethlehem and Jerusalem since 2007. They see this as disrupting “their ability to uphold their religious faith, in contrast to other Christians from around the world who are freely able to visit these sites.”

Present life conditions of the Christians in Gaza

While there were many more Christians in Gaza in the past two decades, their decline in numbers has increased dramatically. In the midst of one-and three quarters million Palestinians, the number of Christians, noted above, are down to 1,000, more or less. About half of them are characterized as refugees and about a third has little or no income and they suffer from chronic illness. The Christian population is on average middle-aged adults, due in part to its low birth and death rates and higher emigration rates for the youth. It shares with the general population impoverished living conditions. Christians share with Muslims the inability to move because of the Israeli blockade.

The decrease in numbers of Gaza Christians is due to some of the earlier-cited conditions of poverty and the embargo on free movement, though some of those who stay, say they have done so, according to Christian Today, “for religious reasons, …national pride and for family.” About $740 per month is the average income among Christian families in Gaza, though a third reported no income. Because of earlier Israeli aerial bombing followed by the blockade, unemployment is rising, electricity is uneven at best, and travel outside difficult.

A visit to Gaza by Sami El-Yousef, regional director of the Pontifical Mission in Jerusalem, in the last decade to check on the progress of the Mission’s emergency intervention occurred just after the Israeli aerial bombing, which destroyed a mother and child clinic. El-Youssef described the conditions of Gaza as “over-crowded, lack of law and order, dirty streets, poor sanitation and the like.”

Just one of the constraints facing Gaza Christians is that they must ask Israel for permits to visit Jerusalem, one of Christianity’s most revered places, as well as other venerated places such as Bethlehem. The Observer reported a grandfather’s application for an Israeli permit to visit his first grandson at Christmastime:

He wants to attend the Greek Orthodox midnight mass in Bethlehem’s Church of the Nativity with his family and attend Ibrahim’s christening, which has been postponed in the hope that his grandfather will make it to the West Bank. “I’m not asking for much,” he said. “I’m living in one Palestinian city, and all I want is to travel to another Palestinian city for a few days.

This scenario may not be the worst privation, though it is symbolic of the constraints faced by Christians of Gaza. While such separation is representative of the plight of Christians, Muslims in Gaza also face many of the same blocks on travel to their families and holy sites in the West Bank. In light of these restrictive conditions and the impoverished social and economic environment, many Christians and Muslims alike have considered emigration. The Observer reported on a poll by the Palestinian Centre for Policy and Survey Research, which noted that “50% of the two million Palestinians in Gaza want to emigrate (as opposed to 22% from the West Bank), lacking only the chance to do so.”

It should be mentioned that besides the Israeli blockade, Egypt has also been imposing its own embargo on Gaza. The World Bank has described Gaza’s economy in a state of “…freefall, with unemployment at 53% – and more than 70% among the under-25s.” Israeli military attacks against the political-military authority, Hamas, have resulted in at least 2,000 non-combatant Palestinian deaths.

In the above context, Christian activist George Anton proclaimed, “We are Palestinians first and last…We are totally suffering from the occupation.” The Guardian further reported that recently the atmosphere among Christians and Muslims has become more liberal. Characterizing a young Christian woman on the occasion of Christmas, which until recently was celebrated privately, she said that the majority of friends at her then-upcoming secret Santa party would be Christian.

While the tendency is for young Christian Palestinians to want to emigrate, one member of the older generation said, “…if there was just peace, an end to the Israeli blockade and a future for Gaza, I will beg them to come back.”

John Mason, PhD., who focuses on Arab culture, society, and history, is the author of LEFT-HANDED IN AN ISLAMIC WORLD: An Anthropologist’s Journey into the Middle East, New Academia Publishing, 2017. He has taught at the University of Libya, Benghazi, Rennselaer Polytechnic Institute in New York, and the American University in Cairo; John served on the United Nations staff in Tripoli, Libya and consulted extensively on socioeconomic and political development for USAID and the World Bank in 65 countries.

Christians in the Holy Land

The Extremist Origins of Education and Sharing Day: Why is the US Honoring a Racist Rabbi?