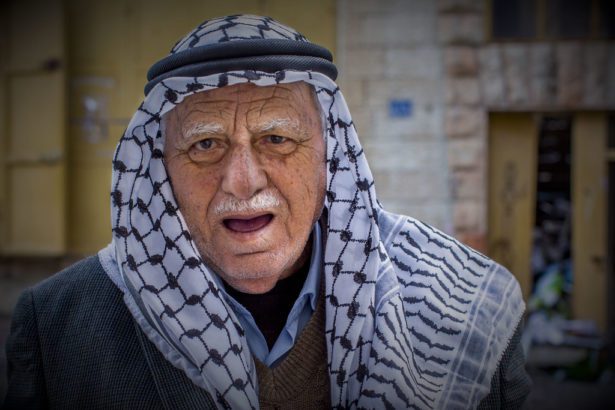 Israel’s designation of Palestine’s most cherished human rights organizations as “terrorists” puts all Palestinians at risk. (“Palestinian Man” by JulianeKravik is licensed under CC BY-NC-SA 2.0)

Christians and other faith-based groups are speaking out against Israel’s latest attempt to silence the discussion on human rights for Palestinians. We can all be a part of this fight for justice.

For starters, ten well-known Christian organizations based in Palestine (several of which I have personal experience with) put out a statement calling on the international community, and Christian institutions in particular, to condemn the move by Israel – a move that is “arbitrary and illegitimate [and] in violation of international laws.”

The Christian presence in Israel and Palestine has dwindled since the creation of Israel on 78% of Mandatory Palestine in 1948. Palestinian Christians have faced hostility from Israel that includes violence against houses of worship, discrimination and violence by the government, and pressure from radical Israeli settlers. (I reported on the persecution of Palestinian Christians not long ago in “Israel is not as Christian-friendly as you think.”)

It’s not just local Palestinian orgs that are protesting Israel’s characterization of important human rights groups as “terrorists.” Around the world, the outcry has been broad and loud (this is often the case when Israel takes action against Palestinians: grassroots protests erupt; the United Nations puts out a statement condemning the move; but no steps are taken to hold Israel accountable. See this list of pro-justice events during Israel’s May 2021 attack on Gaza, for example.)

Nearly 300 US-based human rights groups and leaders have signed a letter, addressed to Secretary of State Antony Blinken, demanding that he “immediately and unequivocally condemn the Israeli government’s recent decision to outlaw and criminalize six Palestinian human rights and community-based organizations.” Many of the signatories to the petition are mainline Christian bodies; a large number are Jewish (because it’s entirely possible to be Jewish and critical of Israel).

The groups in question exist purely to document and expose human rights abuses perpetrated by Israel against the people of Palestine. Of course Israel wants to shut them down.

Israel and its apologists work long hours trying to discredit reports and accusations by these and other human rights groups.

Right this moment, Israel is fighting against the International Criminal Court, trying to wiggle out of multiple war crimes accusations – not by claiming innocence, but on technicalities of jurisdiction (I wrote about this at length in “Even with ICC investigation looming, Israel refuses to behave itself”).

Similarly, several major organizations (Human Rights Watch and Israeli watchdog B’Tselem) have recently published reports accusing Israel of apartheid – which Israel and friends counter with technicalities on the definition of apartheid, allegations of antisemitism, and references to Israel’s (inaccurate) self-identification as a “democracy.”

One of the orgs that got the “terrorist” label last week is Defense for Children International-Palestine (DCIP), exists to protect Palestinian children from gross human rights violations – for example, torture (sadly, Palestinian children are systematically tortured in Israeli prisons; sadly, our Congress doesn’t care).

Rep. Betty McCollum, D-MN, has been working for years to hold Israel accountable for child torture, to no avail. Her campaign, in cooperation with the American Friends Service Committee (AFSC, i.e. Quakers) is here. Contact your Congress member to support the bill here.

If you are an American taxpayer and a Christian, you should be angry. The US provides $3.8 billion in military funding – that’s your money – to the Israeli government every year (that’s over $10 million every day). Israel uses that money to oppress, steal from, torture, and kill Palestinians. Israel violates international laws every day. This most recent outrage is authoritarian and antidemocratic. It’s unacceptable.

That letter to Secretary Blinken mentioned above includes faith-based groups, some of which are listed below.

Actions you can take:

As Christians, we should be involved in this – we should advocate for the oppressed. If human rights groups can’t work in Israel-Palestine, Israeli atrocities will go unreported and things can only get worse. This is real, and it’s our job.

Individually, we can contact our Congress members to support the Rep. McCollum’s resolution here.

Is your denomination crying out on behalf of Palestinians in their time of need?

If yes, then confidently join them in the call for justice.

If not, they should get on board. Talk to the leadership in your congregation, denomination, or organization. Make them aware of the issue, and urge them to advocate for the oppressed in the Holy Land.

OTHER PATHEOS POSTS FROM KATHRYN SHIHADAH ON THIS TOPIC:

Kathryn Shihadah is an editor and staff writer for If Americans Knew. She also blogs at Palestine Home, and regularly writes about Israel-Palestine on Patheos.