You Are Here: Home → The challenge of childhood under occupation

The challenge of childhood under occupation 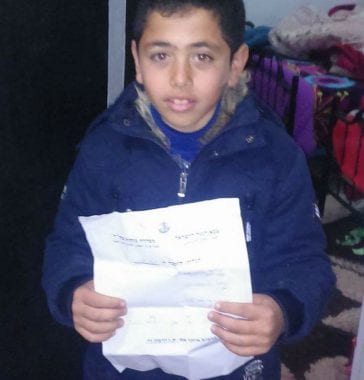 Ahmad Salah, age 9, summoned by the Israeli military for questioning

Israeli violence is a daily occurrence for Palestinians, and children are not exempt. Israeli soldiers and settlers alike are to be feared. Here are two short stories from a typical day.

Israeli soldiers invaded, Thursday, the al-Khader town, south of Bethlehem, and summoned a child, only nine years of age, for interrogation in the nearby Etzion military base and security center. The soldiers also invaded Qalqilia, in northern West Bank, and abducted a young man.

The Bethlehem office of the Palestinian Prisoners’ Society (PPS) said the soldiers invaded the home of Ahmad Salah, and searched the property, before summoning his child, Ahmad, 9, for interrogation.

It added that the army has recently summoned for interrogation many children in al-Khader, including a 10 year of age boy, just two days ago.

Israeli settlers, on Wednesday, broke into a school in the village of Beit Ta’mir, east of Bethlehem, and damaged some of its content, said local government sources.

WAFA reported that, according to Hasan Briejeh, representative of the wall and settlements committee, Israeli settlers broke into the Challenge 5 School, breaking a door and tearing a tent inside the school.

He said the families prevented the settlers from inflicting more damage to the school, and chased them away.

The school, which was rebuilt in September 2017, has been named “Challenge 5 School,” because it was the fifth school to be constructed by the ministry in areas threatened by Israeli settlement construction and expansion.

Also see these articles on the challenges Palestinian schoolchildren face.