You Are Here: Home → Biden kneels before Israeli President’s chief of staff 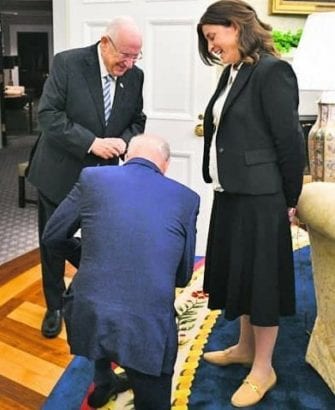 President Joseph Biden kneels before Rivka Ravitz, chief of staff for Israeli President Reuven Rivlin on July 2, 2021. Ravitz is a member of the Haredi sect of Judaism. According to Israeli author Israel Shahak, Haredi teachings sometimes state that Jews are superior to non-Jews. (Kipa)

Israeli media are reporting that President Joe Biden knelt before Israeli President Reuven Rivlin’s chief of staff during Biden’s July 2nd White House meeting with Rivlin. Biden, to the surprise of onlookers, suddenly went down on his knees in front of Rivka Ravitz upon learning that she’s the mother of 12 children.

Ravitz, an ultra-orthodox adherent whose parents were Americans who moved to Israel, has long been close to Rivlin. According to an Israeli publication, Ravitz has been with Rivkin “at the most dramatic points in his career” since 1999 and is part of an important religious Israeli family: “At the age of 18, she married the son of the mythical Knesset member from Torah Judaism, Avraham Ravitz, and so she married politics.”

Her husband, Yitzchak Ravitz, is the former deputy mayor of the haredi Israeli settlement Beitar Illit, where the family lived for many years. Such settlements are illegal under international law.  Mondoweiss reports that Beit Illit is known as a bastion of Jewish extremism, quoting from the Financial Times:

…in the settlement of Beitar Illit, south of Jerusalem… anyone interested in renting a flat is checked by a “demographics committee”….Residents say Beitar is patrolled by a self-styled “modesty police”, which bullies youngsters to toe the line… David Biton, a 19-year old trainee baker who lives with his parents in Beitar Illit, says he was beaten up by two ultra-orthodox men recently after being seen chatting to girls. “I tried to put together a group of youngsters to testify against them but everyone was too afraid,” he says.

Ravitz is a member of the religious party Degel HaTorah. Haredi Israelis, also known as ultra-orthodox, have fundamentalist, sometimes extreme views about Jews and Judaism.

Israeli author Israel Shahak quotes a 1988 article published in Israel by a highly regarded authority on the Haredim: “The Haredi world is Judeocentric. The essence of Haredi thought is the notion of an abyss separating the Jews from the Gentiles.”

In his book “jewish Fundamentalism in Israel,” Shahak writes: “The fact is that certain Jews, some of whom wield political influence, consider Jews to be superior to non-Jews and view the world as having been created only or primarily for Jews.” An article in the Israeli newspaper Ha’aretz reports that some in ultra-orthodox communities “are taught that non-Jews aren’t quite human.”

In 2015 Yitzchak Ravitz helped lobby President Rivkin for his assistance in securing the release of a Haredi man, Rabbi Mordechai Samet, imprisoned in the U.S. for swindling millions of dollars from Americans.

According to the U.S. judge who sentenced Samet: “Mordechai Samet lived a life of unremitting fraud. For many years, Mordechai Samet’s life has been completely dedicated to the pursuit of crime. He defines the word ‘racketeer.’”

Samet was convicted on 33 counts of racketeering, money laundering conspiracy and other charges. A local newspaper reported that the conviction was part of “a criminal case that began suddenly one morning in March 2001 when federal agents swept into the Hasidic community of Kiryas Joel [a new town in New York] and began rounding up suspects.

“In all, 14 men, most from Kiryas Joel, were accused of taking part in schemes that netted more than $5.5 million. Using dozens of fictitious identities, the group allegedly obtained tax refunds and business loans they didn’t deserve, among other scams.”

Israeli media report that after Biden knelt, “the two presidents spoke at length about the commitment to strengthen relations between the two countries.” Biden announced [translated by Google from the Hebrew]: “My commitment to Israel is known and engraved in the rock.”

Biden has called himself a Zionist and has a long history of support for Israel, consistently voting to give the country billions of dollars of U.S. tax money. In 2014 he helped give Israel an additional quarter of a billion dollars during its 2014 onslaught against Gaza.