You Are Here: Home → Biden is most pro-Israel nominee ever (and he will ‘defeat’ ‘hypercritical’ voices in the party) 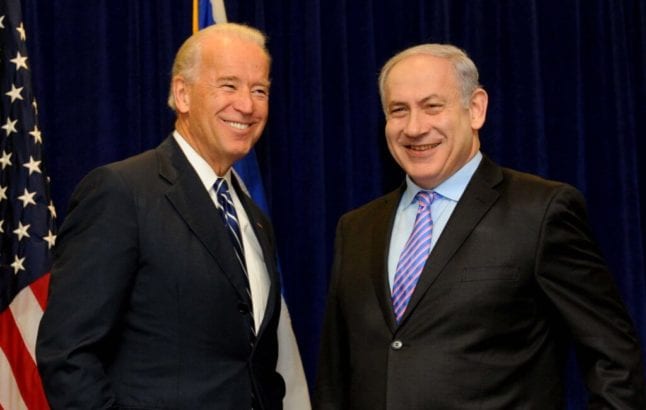 Pro-Israel advocates are overjoyed at the prospect of Joe Biden… they say there has never been a nominee from any party who is so pro-Israel, and that his choice of Kamala Harris as veep reflects his love of Israel…

By Philip Weiss, reposted from Mondoweiss
Pro-Israel advocates are overjoyed at the prospect of Joe Biden becoming the Democratic nominee for president this week. They say there has Never been a nominee from any party who is so pro-Israel, that Joe Biden personally wrote the Democratic platform that is “straight down the line” behind Israel, and that his choice of Kamala Harris as veep reflects his love of Israel. And as for the “hypercritical” new members of Congress, that attitude will be “defeated” under Biden.

[This is despite Israel’s long history of human rights abuses.]

“We’ve actually never had a nominee on any side of the aisle for president who has a longer and stronger record than Joe Biden,” Halie Soifer of the Jewish Democratic Council of America said on an American Jewish Committee zoom call yesterday. “He was elected in 1972 to the Senate and has been working on these issues with nine Israeli prime ministers ever since. There is no one with a stronger record on Israel to run for president than Joe Biden and we can all rest asured that as president he would only strengthen the relationship.”

Former Florida congressman Robert Wexler, now head of the pro-Israel group the S. Daniel Abraham Center for Middle East Peace, said that Joe Biden had written the Democratic Party platform plank on Israel, which eliminates any reference to occupation (and that some have said is to the right of Israel’s Likud Party).

The Democratic platform… it’s not a coincidence that it’s a pro Israel straight across the line platform. It was literally written by Joe Biden himself. He made the decision in terms of whether or not to include the type of language that illustrates decades of strong Democratic Party and bipartisan consensus favorable to Israel.

Even if four decades of solidly straightline pro Israel activity wasn’t sufficient for you, his most important pick in terms of what he’s doing now is his vice presidential nominee, and Senator Harris clearly stands in the Biden wing of the Democratic Party in terms of Israel, so I don’t know what more VP Biden could possibly do to engender the type of confidence that he has built up over four decades of being one of Israel’s strongest, staunchest supporters day in day out in every circumstance. … His pick for vice president is exactly like him in staunchly supporting Israel.

Wexler recalled that when Israel insulted Biden by announcing settlements when he arrived in Israel in 2010, some said he should get on a plane and go home. But no! “The Vice President stayed and he met with his friend, long term relationship– Prime Minister Netanyahu– and they talked things through, diplomacy in action.” Of course the settlements stayed…

Wexler said a Biden administration would “create conditions where lives are improved for Israelis and Palestinians,” and there would be progress toward negotiations between the sides, and this would remove the desire of progressives to criticize Israel. Those critics will be “defeated.”

When people see the progress from an administration that is committed to engaging both Israelis and Palestinians from a position of strength there won’t be a need as there is today where people perceive a one-sided or a more one-sided American policy to strike out in a hypercritical way towards Israel. Hypercritical, punitive language and prospective policies toward Israel must be defeated. There’s no question about that. And they will be defeated.

Wexler was surely referring to Bernie Sanders and Beto O’Rourke characterizing Netanyahu as racist, and many progressives seeking to condition aid to Israel over its settlement project.

An AJC rep asked the pols about the concern that Bernie Sanders and his ilk will insert their thinking into the Biden administration.

There is this enormous amount of attention paid… to a very tiny percentage of the Democrats in the House.

While Soifer, who has advised Harris and who served in the Obama administration under Samantha Power at the U.N., said that Biden will restore an era when no one publicly argues about Israel.

When it comes to support of Israel there is no question that Donald Trump has politicized it, and with Biden we will see an increase in the bipartisan aspect of the relationship.