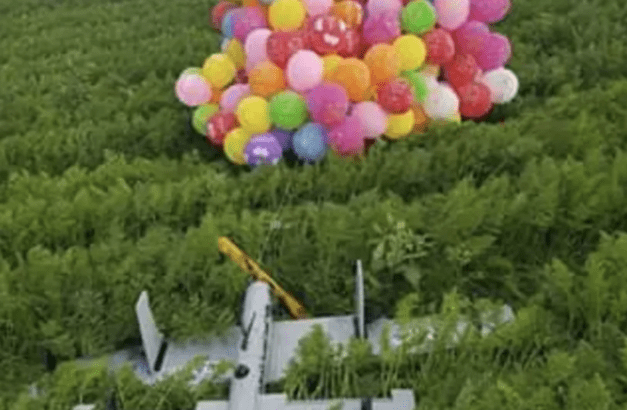 As has too often been the case, Associated Press once again fails the test of good journalism on the subject of Palestine, earning poor marks on accuracy, balance, and context.

Associated Press, considered one of the most respected sources of global news reporting, has been the subject of more than one If Americans Knew investigation. We have detailed AP’s slanted coverage of the Israel/Palestine issue for years in hopes that the organization would revamp its efforts there. (Our major studies are here and here, and previous analyses are here.)

(IAK has also reported on other news organizations that exhibit the same lack of objectivity – as have other watchdogs. Read here about a broad, 50-year study.)

A recent erroneous story is about balloons. AP’s original story is 120 words – 7 sentences, of which 4 cite statements by Israeli spokespersons. 2 are factual, and 1 is grossly exaggerated and misleading. (The story provided 0 sentences from Palestinians.)

The AP article was carried by many large news outlets, including the New York Times and ABC News.

No news organization as busy as AP would be expected to cover every detail of a story like this, but readers deserve a less israel-centric story and instead a more objective, balanced report.

Time to set the record straight.

Here is the AP article in full:

The Israeli army said it attacked targets in the northern Gaza Strip late Thursday after Palestinian militants launched explosive balloons from the territory into Israel.”

In a brief statement, the army said airstrikes struck “infrastructure used for underground activities” by Gaza’s ruling Hamas militant group. There were no reports of injuries.

Earlier, Israeli police reported that an explosive device had landed in the southern town of Arad. A police bomb squad dismantled the device.

Israel and Hamas have fought three wars and numerous smaller skirmishes since the Islamic militant group seized control of Gaza in 2007.

In recent months, both sides have honored an informal cease-fire. Israel holds Hamas responsible for all fire emanating from the coastal strip.

Now let’s talk about AP’s word choices – and what it didn’t say.

AP: The Israeli army said it attacked targets in the northern Gaza Strip late Thursday after Palestinian militants launched explosive balloons from the territory into Israel.”

This contains two problematic word choices: “after” and “militants.”

“After” – AP’s word choice implies that the Israeli response was “retaliatory,” and that Palestinians initiated the violence with balloons. This framing completely ignores context. In fact, 70 percent of Gazan families are refugees, having been ethnically cleansed from their homeland by Israel in 1948 or 1967, demanding their internationally recognized right to return home.

Gaza is also under de facto occupation, and has struggled under an illegal blockade, imposed by Israel (and peripherally, Egypt). This blockade has gone on for 13 years, keeping food, medicine, and other staples from reaching the population. Numerous organizations, including the Red Cross, Human Rights Watch, and Defense for Children International, report that this is causing immense misery, including malnutrition and growth stunting among children. (Read our collection of human rights reports here.)

The blockade is in place because the people of Gaza elected Hamas as their ruling party. Hamas believes in resisting occupation, not tolerating it (as the Fatah government does in the West Bank), and is striving to end the blockade and bring justice to the Palestinians of Gaza. They have the right according to international law to resist their occupiers – even armed resistance is permissible.

Gazan “militants” might more accurately be called “resistance fighters.” Resistance groups include Hamas – an arm of the democratically elected party in Gaza – and other factions that operate outside of Hamas’ control and sometimes in defiance of its directives.

Resistance is challenging because Gaza is essentially demilitarized (by Israeli decree). Resistance fighters have gotten creative, launching incendiary balloons and kites from time to time since 2018. These have caused occasional fires on Israeli farmland; they have never killed or even injured anyone.

Kites and balloons were preceded by and are now are being answered with Israeli fighter jets, which have often been used against Gaza over the past 20 years. (Israel has all the latest in war technology thanks in part to US military aid of over $10 million a day.)

(The resistance also includes rockets, which have gained an unfounded reputation for “endangering millions of Israelis.” The reality is that Gazan rockets combined with mortars have killed under 50 Israelis in almost 20 years, while Israeli airstrikes have killed approximately over 4,000 Gazans.)

Without this context, it is impossible for the reader to know why Gazans are launching these balloons.

Failure to cover the other side

AP: In a brief statement, the army said airstrikes struck “infrastructure used for underground activities” by Gaza’s ruling Hamas militant group. There were no reports of injuries.

Earlier, Israeli police reported that an explosive device had landed in the southern town of Arad. A police bomb squad dismantled the device.

These are the second and third of four references to official Israeli statements. Notice that AP lacks journalistic balance in this article, as it provides no statement from Palestinians.

It’s not that such statements were unavailable. Even Israeli papers Ha’aretz and Jerusalem Post were able to attain some; in June, Anadolu Agency quoted a Palestinian activist as well:

(Ha’aretz) “The senior Hamas official said that the resumption, if unofficial, of the balloons points to growing pressure and anger in the Strip over the lack of progress in what was once called understandings for a cease-fire…there were understandings and agreements to move forward with infrastructure and humanitarian projects, but everything appears to be stuck.”

(Anadolu) “for the last year, Palestinian activists have been flying burning kites and balloons into Israeli territory as part of ongoing anti-occupation demonstrations along the fraught Gaza-Israel buffer zone.”

AP: Israel and Hamas have fought three wars and numerous smaller skirmishes since the Islamic militant group seized control of Gaza in 2007.

In reality using the word “war” to describe what has happened to Gaza is outrageous. As mentioned above, Gaza (like the Palestinian West Bank and East Jerusalem) is for all intents and purposes demilitarized. Hamas and other resistance groups have available to them essentially homemade rockets – which rarely kill or injure – and balloons and kites. Meanwhile Israel has the latest technology. Three major Israeli incursions into Gaza have resulted in death tolls of over 3,700 Palestinians and under 100 Israelis.

Regarding the “numerous smaller skirmishes” since 2007, again the word “skirmish” implies opposing armies – but the Palestinians don’t have an army or anything resembling proper weaponry. AP’s language is disingenuous.

Instead of a blanket statement about skirmishes, here is some more specific information that AP could have tapped into:

AP: In recent months, both sides have honored an informal cease-fire.

This AP statement is simply false. It is not hard to discover that, for example:

AP: Israel holds Hamas responsible for all fire emanating from the coastal strip.

This is a factual statement: Israel does blame Hamas for all rockets; however the reality is more complicated. While Hamas is the ruling party in Gaza, it can not guarantee the behavior of members of every faction that operates independently. And given the length and cruelty of the blockade, many in Gaza are infuriated with Israel – especially since 1.4 million of Gaza’s population of 2 million are families of refugees who were exiled in 1948, and have been waiting ever since for their right to return (as guaranteed by international law).

AP certainly could have done better. Why did they release such an inaccurate, inadequate report? If Americans Knew provided a hypothesis in its study of AP’s early 2018 coverage of Israel/Palestine:

AP’s main bureau for Israel-Palestine is in Israel. Reports from Gaza and the West Bank are usually phoned in to this bureau, where its editors choose and write the news stories that are sent out.

Many (possibly most) of the journalists in this main bureau are Israeli citizens or have partners who are. Some (possibly most) have served in the Israeli military and/or have relatives that have done so. While this doesn’t guarantee pro-Israel bias (some Israeli journalists for Ha’aretz, for example, are excellent, accurate writers on this issue) it does suggest the possibility of partiality influencing their work, either consciously or unconsciously.

A gift for AP

Here is a gift from If Americans Knew to the Associated Press – and any other news organization that is interested.

AP, you may use the following 100-word summary in any of your future news reports on Israel/Palestine. That way you can provide what a top-notch news outlet should always provide its readers: context, balance, and accuracy.

Israel’s founding war in 1948 included the ethnic cleansing of 750,000 indigenous Palestinians (both Christians and Muslims) – because they were not Jewish. Since 1967, millions of Palestinians have endured a brutal Israeli occupation. Gazan Palestinians, under an illegal Israeli blockade since 2007, suffer from shortages of food, medicine, and other staples.

Israel forbids Palestinians from having weapons or a standing army, while Israel has one of the world’s most powerful armies – subsidized by $3.8 billion in US military aid per year.