You Are Here: Home → Adelson-Funded IAC and Other Groups May Soon Rival AIPAC for Influence, Power

Adelson-Funded IAC and Other Groups May Soon Rival AIPAC for Influence, Power 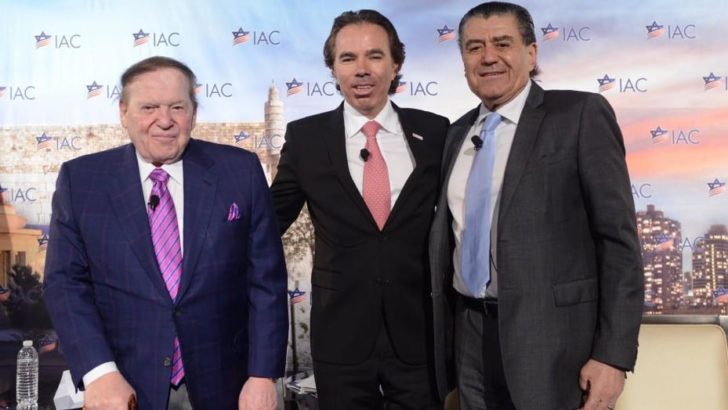 How casino magnate Sheldon Adelson uses his billions of dollars to advocate for Israel:

(The Washington Report has been reporting on this issue for 36 years; subscribe to it here.)

AS SUPPORT FOR the Israeli government and its 50-year occupation of the West Bank and East Jerusalem diminishes among American Jews, Las Vegas casino mogul Sheldon Adelson has stepped up his efforts to defend Israel’s right-wing government and prevent the establishment of a Palestinian state.

As a major contributor to AIPAC, Adelson helped underwrite many congressional trips to Israel sponsored by AIPAC’s educational affiliate and contributed funds for its lavish new headquarters in Washington. In November 2007, however, he learned that AIPAC was supporting a congressional letter, signed by more than 130 House members, urging the Bush administration to increase economic aid to the Palestinians—an initiative the government of Israel also supported. But Adelson was outraged.

Having always rejected the idea of a two-state solution, Adelson has said there is no such thing as the Palestinian people. He has been a major contributor to the far-right Zionist Organization of America (ZOA), which opposed the 2007 peace conference in Annapolis. With Adelson’s support, the ZOA ran a full-page ad headlined, “Secretary Rice: Don’t Promote a State for Palestinians.”

A more recent vehicle for Adelson to promote his views is the Israeli-American Council (IAC), launched in 2007 as a Los Angeles nonprofit focusing on organizing the local community of nearly 200,000 Israelis or ex-Israelis living in the area. The IAC presented itself as a bipartisan, largely non-political organization. All of this changed in 2013 when, IAC co-founder and CEO Shoham Nicolet wrote in The Times of Israel, “Dr. Miriam and Sheldon Adelson were introduced to the IAC and overnight decided to drive its nationwide growth. During an event in their home, several months before last year’s presidential election, Mr. Adelson, standing before an IAC crowd, smiled and said: ‘You all know who Miriam and I voted for, it is probably not a secret.’ The audience laughed…He continued and emphasized that to win the fight for Israel and the future of the Jewish people, we must have everyone as part of the IAC—Democrats and Republicans alike.”

Originally, Haim Saban, another billionaire supporter of Israel, who contributed large sums to Hillary Clinton’s campaign—and, like Miriam Adelson, an Israeli-American—was also involved with the IAC. Both Adelson and Saban share a tough line on Iran. At IAC’s 2014 meeting, Saban said Israel should “bomb the living daylights out of those sons of bitches.” But they disagreed on Palestine. Saban said that without a two-state solution, Israel would be forced to choose between being a Jewish state and a democratic one. Adelson responded: “Israel isn’t going to be a democratic state—so what?” A year later, in October 2015, Saban ended his support for IAC.

In an Oct. 31, 2017 article headlined, “Adelson-funded Israel Lobby Group IAC Could Soon Rival AIPAC,” the Israeli newspaper Haaretz reported that, “Congress is where the IAC is now setting its sights. In 2016, another organization, Israeli-American Coalition For Action was founded. It focuses on political lobbying in Congress on issues such as Iran and fighting Boycott, Divestment and Sanctions (BDS).”

According to the New York Jewish Week, IAC “is the driving force and political architect of anti-BDS laws.”

Showing its growing influence in this country, IAC’s 2017 conference featured, for the first time, a prominent U.S. government speaker, U.S. Ambassador to the U.N. Nikki Haley, as well as Israel’s U.N. Ambassador Danny Danon. Other speakers included Israel’s far-right Education Minister Naftali Bennett, and its equally extreme Deputy Foreign Minister (and Likud MP) Tzipi Hotovely—whose appearance came shortly after she attacked American Jews for “assimilating” into American society, saying they do not understand Israel because they “never send their children to fight for their country.” She was criticized for her remarks by Netanyahu and Israeli President Reuven Rivlin—who himself once described Reform Judaism as “idol-worship, and not Judaism.”

There was no criticism of Hotovely from Sheldon Adelson.

The IAC is not the only Adelson-funded organization attempting to silence opposition to Israeli occupation policies and promote the interests of the settler movement. Alpha Epsilon Pi, or AEPi, known as “the Jewish fraternity,” is expanding to Israel. It recently chartered its third branch in Israel at Tel Aviv University, Israel’s largest academic institution. Others are already active at the Interdisciplinary Center in Herzliya, known for its significant English-speaking student body, and the Hebrew University in Jerusalem. While officially apolitical, AEPi relies on funding from Adelson. According to The Forward, it “played a role in blacklisting the liberal lobby J Street from joining the Conference of Presidents of Major American Jewish Organizations.”

Rabbi Shmuley Boteach and his group, The World Values Network, is another Adelson favorite. It runs full-page ads to describe critics of Israel as “anti-Semites.” According to The Guardian, “Boteach has accused numerous high-profile figures and institutions whose views on Israel and Israeli occupation he disagrees with of being anti-Semites, including the former U.S. Secretary of State John Kerry, who he accused of ‘devaluing Jewish lives’ and ‘appearing to justify the spilling of Jewish blood’ over his pursuit of an Iranian nuclear deal.”

Ironically, alt-right leader Richard Spencer finds Israel and its ethnocentric policies worthy of praise—a virtual model for the Aryan homeland he wants to create in the U.S. Speaking at the University of Florida last October, he said: “The most important and most revolutionary ethno-state, and it’s one that I turn to for guidance…is the Jewish state of Israel…the Jewish state of Israel is not just another country in the Middle East. It is a country for Jews and for Jews around the world.” He described his desire for a white European enclave in North America as “white Zionism.”

Prior to President Donald Trump’s decision to recognize Jerusalem as Israel’s capital, Eli Clifton, writing in the Israeli journal +972, noted that, “Trump’s biggest campaign contributor, billionaire casino magnate Sheldon Adelson, is showing growing impatience with Trump’s slowness in moving the embassy…Adelson was reportedly furious with Secretary of State Rex Tillerson in May for suggesting in a ‘Meet The Press’ interview that moving the embassy should be contingent on the peace process…Adelson and his wife Miriam spent more than $80 million on Republicans in 2016 and he gave $15 million to Trump’s inauguration…According to Newt Gingrich in 2012, unconditional support for Israel is Adelson’s ‘central value’ when Adelson was funding his presidential campaign’s Super PAC.”

Adelson once said that, while he served in the U.S. Army, he wished it had been the Israeli army instead. He has poured more than $200 million into Israel Hayom, the loss-making give-away tabloid he founded in 2007 and which is now Israel’s largest newspaper, widely known as the “Bibiton,” or “Bibiton-daily.” The paper’s role in Netanyahu’s 2009 election victory seemed so clear that his opponents called for an investigation into its funding under Israel’s election financing laws.

In fact, Adelson has always been to the right of Netanyahu and publicly criticized his 2009 Bar Ilan University speech endorsing Israel’s official policy of a two-state solution.

In financing the parties in power in both Israel and the U.S., Sheldon Adelson seems to have become the arbiter of Middle East policy in the two countries. In this enterprise, the long-term interests of both Israel and the U.S. have been put in jeopardy, international law has been repudiated, and a just solution for the conflicting claims of Israelis and Palestinians has been rejected.

Allan C. Brownfeld is a syndicated columnist and associate editor of the Lincoln Review, a journal published by the Lincoln Institute for Research and Education, and editor of Issues, the quarterly journal of the American Council for Judaism.

More articles on Adelson are here