You Are Here: Home → Pro-Israel superstar may have worked as a secret agent on college campuses 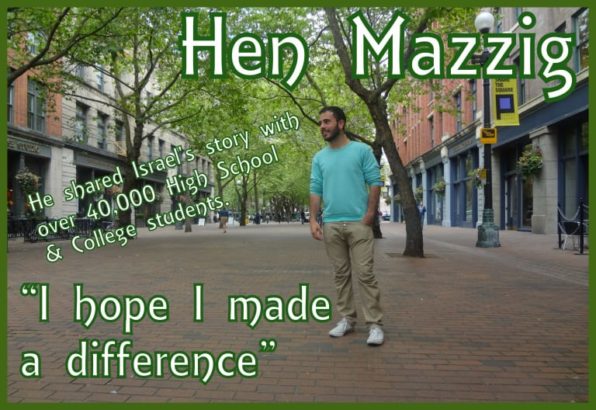 By 2014 Mazzig had already spoken to over 40,000 students from high school through college, and helped defeat a boycott resolution at the University of Washington.

The Forward reports that a hugely popular pro-Israel speaker and writer, Hen Mazzig, has been secretly working directly for the Israeli government. It appears that his actions may have violated U.S. espionage laws.

The Jewish Forward reports that a hugely popular pro-Israel speaker and writer, Hen Mazzig, has been secretly working directly for the Israeli government. It appears that his actions may have violated U.S. espionage laws.

According to the Forward, Mazzig’s op-eds “have been published in nearly every Israeli and American Jewish publication (including the Forward), and his speeches to students across North America and Europe, have garnered him legions of fans, including more than 18,000 Twitter followers.”

“A Forward investigation has revealed that he also worked directly for the Israeli government. He doesn’t seem to have told anyone that, however — neither the sponsors of his speeches, nor the students who listened to them. Because he kept quiet, and because those payments are related to his political work in the United States, he might have violated an American anti-espionage law, according to experts consulted by the Forward.

Experts cited by the Forward say that Mazzig seems to have violated the Foreign Agent Registration Act (FARA), an American anti-espionage law. This law requires individuals and groups working on behalf of a foreign government to divulge that fact.

Attorneys say Mazzig should have registered as a foreign agent. Mazzig admitted to the Forward that he was a paid contractor for the government of Israel, and said that Israel’s official government advertising agency hired him to inform them about issues on American campuses.

FARA has recently been invoked against a Russian graduate student in the U.S., who has been imprisoned for three months, mostly in solitary confinement, despite the fact that she appears to be innocent of the charges.

It is unknown whether U.S. authorities will charge Mazzig with violating the FARA requirement.

An attorney who specializes in FARA cases told the Forward: “The policy behind FARA is, yes, lobbying will happen. The key is for the American people to know when it comes to foreign influences, who’s pulling the strings.”

The Forward reports that The Lawfare Project, a pro-Israel organization that often uses  lawsuits to chill pro-Palestinian activism, demanded that the Forward delay publishing the article until lawyers could speak on Mazzig’s behalf. The Forward accordingly held the story for three and a half days, but did not hear further from Mazzig’s lawyers.

The publications and organizations such as campus Hillel groups that have been featuring Mazzig say they didn’t know he was employed by the Israeli government. According to the Forward, student organizers “say they don’t remember Mazzig disclosing his contracting work, either beforehand or during his speeches.”

The Forward points out: “Over the last decade, and particularly in the last few years, the amount of money spent by outside groups to influence the Israeli-Palestinian debate on campus has risen sharply.

“In addition to American Jewish donors heavily increasing their funding for pro-Israel campus advocacy groups, foreign governments and other unaccountable entities are also inserting themselves into the collegiate fray.”

A paper trail provided by the Forward indicates that Mazzig may have been working under Israel’s notorious Ministry of Strategic Affairs, which sponsors diverse secretive operations.

An Israeli organization named Seventh Eye reported last month that the Ministry of Strategic Affairs has been working with pro-Israel American nonprofits on a project called “Kela Shlomo” (translated as “Solomon’s Sling”). The Forward describes this as an effort “to fund anti-BDS activities outside of Israel that won’t be attributable to the government itself.”

Seventh Eye reports: “‘Kela Shlomo’ is an [Israeli] organization with a special corporate structure. Its legal envelope is civil: its founders have established it as a public benefit company, and its shareholders are former senior civil servants.”

The article points out that “the entire purpose of the organization is to implement government policy through a budget that combines the government budget and income from private donors.”

Ha’aretz has also reported on the initiative: “The Ministry of Strategic Affairs and Public Affairs established an external body – a private company for the benefit of the public called ‘Shlomo Kela’ – to which the government decided to transfer NIS 128 million two weeks ago, in addition to 128 million from private donors from around the world. This is according to the ministry, among other things, in order to carry out ‘mass awareness activities’ within the framework of “the struggle against Israel’s delegitimization campaign” around the world.

Among the project’s members is Sagi Balasha, a former CEO of Sheldon Adelson’s Israeli-American Council.

Seventh Eye reports that two American organizations have donated millions of shekels to Kela Shlomo. “The central body of the two is the Central Fund of Israel, which is managed by the American Marcus family, one of whose sons was recently interviewed by Israel’s Channel 11.”

The Central Fund of Israel is an American tax-exempt organization (#13-2992985) founded in 1979. Its IRS 990 form gives it mission as “promoting charitable activities in Israel.” 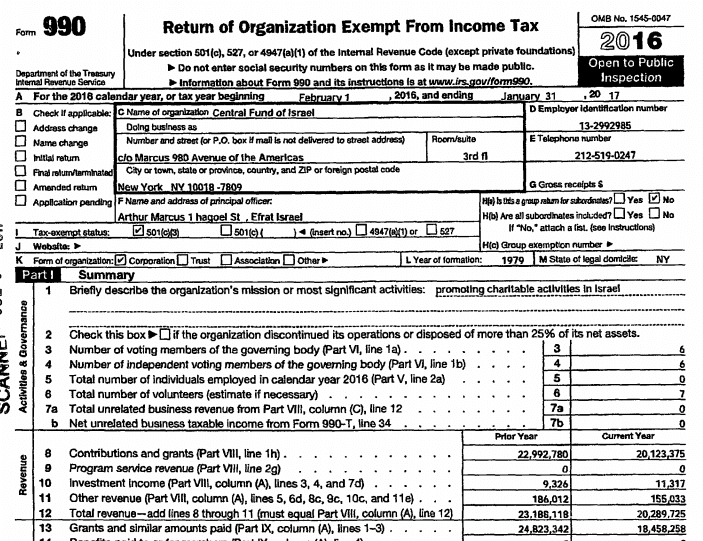 While Its address is listed as 980 Avenue of the Americas, Third floor, New York, NY (a Marcus textile company) and its phone number is given as 506-148-2718, it appears that the Marcus family lives much of he time in Efrat in the West Bank, a right wing Jewish-only colony built on land confiscated from three nearby Palestinian villages.

According to an Israeli eulogy for Arthur Marcus, the organization transferred $20 million of tax-deductible U.S. money to Israel.

The other American organization donating to Kelo Shlomo /Solomon’s Sling, according to the Forward, is the One Israel Fund.

The tagline for the organization says: One Israel Fund – Building and Securing the Heartland Of Our Nation.” While the organization refers to “our nation” as Israel, it is a registered nonprofit in the U.S. It lists an American address (445 Central Ave, Cedarhurst, New York) and raises money from American taxpayers. This money, sent to Israel, is deducted from the taxes individuals pay to the U.S.

Kelo Shlomo (also spelled Kello Shlomi) is expected to provide a speedy, coordinated response “to efforts to stain Israel’s image around the world, for example, in the event of a military operation, terror attacks [sic] or UN votes against government policies.”

“This would be done by launching online campaigns, lobbying, engaging organizations abroad and bringing delegations to Israel.”

Seventh Eye reports: “Much of the activity is outsourced, as a result of a declared strategy that in order to succeed in the mission, the government’s involvement in the ‘mass awareness activities’ it initiates should be disguised. This outsourcing is carried out by agents in Israel and abroad who make up… the ‘pro-Israel network.'” 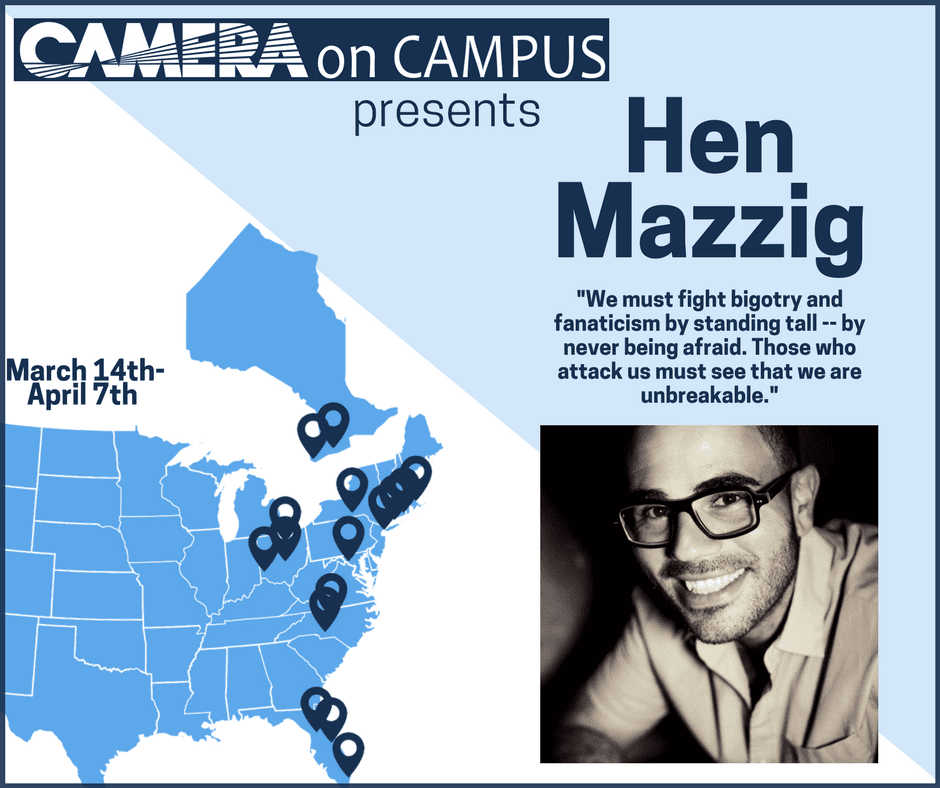 CAMERA created chapters in major cities, including New York, Chicago, Fort Lauderdale, Los Angeles, Miami, San Francisco, Philadelphia, and in1988 a Boston chapter and office, founded and led by Andrea Levin, who has served as associate editor of the Journal of Policy Analysis and Management at Harvard’s Kennedy School of Government.

The Executive Board has included some top Boston business leaders, including the co-founders of  Timberland and Staples.

CAMERA’s current head is Levin, named in 2002 as “America’s fifth most influential Jewish citizen.” Its membership now numbers over 65,000.

In addition to the Boston headquarters the organization also has offices in Washington, DC, New York, Chicago, Los Angeles, and Israel. Among CAMERA’s authors was columnist Charles Krauthammer. It now has assets of close to $8 million, and Levin receives an annual salary of over $260,000.

The organization, which operates both in the U.S. and abroad, is a member of the New England Israel Campus Roundtable, which includes 19 pro-Israel organizations.

So far it is unknown whether the U.S. justice department will investigate Hen Mazzig and his network of American enablers following the Forward’s revelations. Past history suggests that this will not occur – unless enough American demand it.

So far, no U.S. media seem to have reported the Forward’s findings.