You Are Here: Home → 38 billion reasons to vote for Joe Biden – If you’re Israeli 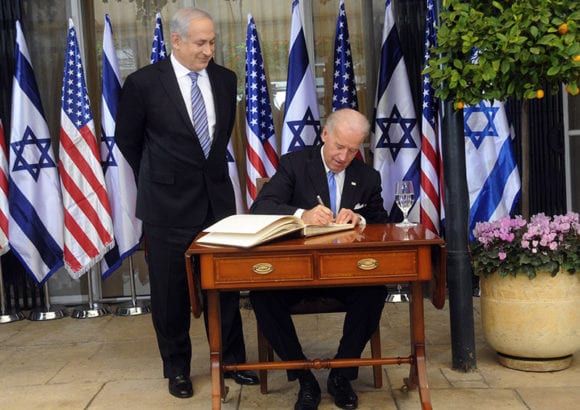 The Jewish Forward has just published an article saying that Joe Biden’s long loyalty to a foreign country is a reason to vote for him. The article is entitled “38 billion reasons to vote for Joe Biden.”

The title refers to the $38 billion aid package to Israel, which works out to $7,000 per minute from American taxpayers and is approximately $23,000 per each Jewish Israeli family of four.*

This money is going to Israel even while the U.S. economy has been crippled by COVID-19 closures – 163,735 US businesses have closed down and millions of Americans have lost jobs.

The article celebrating this aid to Israel is by Robert Wexler, who was a Democratic member of the House of Representatives from 1997 to 2010, allegedly representing Florida’s 19th district.

Wexler fails to mention that Israel has a long, thoroughly documented record of human rights violations, beginning with its founding war of ethnic cleansing against the Muslims and Christians who had been the large majority of the region’s inhabitants.

In addition, the Forward fails to inform readers that Israel is known for a system of supremacy in which unwelcome religious/ethnic groups, such as Muslims and Christians, are discriminated against and oppressed.

While Israelis reap the benefit of massive US aid packages, these drain much-needed money from American taxpayers and can lead to job losses. Israel has a history of stealing US technology, sometimes selling it to American adversaries.

For former U.S. Congressman Wexler, however, Biden’s leading role in siphoning US tax money to Israel is a reason to vote for him. Below is an excerpt of Wexler’s article published in the Forward:

“…I want to assure these voters that we can count on Joe Biden to fight for Israel’s safety and security. Under his administration, the United States will take steps to strengthen our ties with Israel and enhance Israel’s ability to survive and flourish as a democratic, Jewish state.

Elections are binary choices. We don’t pick and choose the best qualities of each candidate. Regardless of your assessment of President Trump’s performance on Israel, you can vote for Biden with confidence, knowing that his presidency will reflect the deep friendship he has shown toward Israel throughout five decades in public service.

As Vice President, Biden took a leading role in negotiating the 10-year, $38 billion U.S. aid package to Israel that Congress passed in 2016 — the largest in U.S. history. Biden opposes conditioning aid to Israel, even when the U.S. and Israel disagree on policy. Biden is also committed to maintaining Israel’s qualitative military edge. Based on Biden’s past support for Israel’s QME, it is unlikely that a Biden administration would authorize the sale of F-35s or any sophisticated arms to Israel’s neighbors without consulting with Israel and ensuring that safeguards were in place to protect Israel’s security.

Since the 1960s, American presidents have made commitments to Israel’s security and qualitative military edge, a core pillar of Israel’s security strategy that allows the Jewish state to defend itself despite its adversaries’ advantages in size, population, and resources. [Editor’s note: Israel has one of the most powerful militaries in the world, and is the only country in the Middle East with nuclear weapons.] The Trump Administration’s promise of advanced weapon systems tied to the normalization agreement with the United Arab Emirates has made reaffirming this principle all the more important.

Biden has been a strong friend of Israel since his first trip there in 1973. He opposed the sale of AWACs to Saudi Arabia in the 1980s because of his commitment to maintaining Israel’s QME, and within the Obama administration, he advocated providing Israel with crucial missile-defense systems like Iron Dome, David’s Sling, and Arrow 3.

Biden would restart a positive dialogue with the Palestinians by unequivocally stating that U.S. policy is anchored in a vision of two nation-states — Israel, and a new Palestinian state — living side by side in peace and security. Taking steps with both parties designed to simultaneously improve lives, narrow the conflict, and build a two-state reality would strengthen Israel’s security and bolster bipartisan support for Israel in the U.S. [Editor’s note: In reality, the “state” proposed for Palestinians would be a nonviable entity composed of non-contiguous cantons on, at most, 20 percent of the land; also see this.]

While Wexler favors Biden, the Republican Jewish Coalition is promoting Trump, dropping $3.5 million on TV ads for Trump in South Florida. In one ad the narrator says: “Only one candidate has stood with the Jewish community: President Donald Trump, the most pro-Israel president in history.”

Adelson has said that he regrets that he served in the US military rather than the Israeli one:

* A bill to set the agreement into U.S. law is currently before Congress. It would increase the amount to Israel and provide additional perks to the Jewish state.

Information and statistics on Israel-Palestine