You Are Here: Home → Palestinian on hunger strike in Israeli jail ‘on verge of death’

Palestinian on hunger strike in Israeli jail ‘on verge of death’ 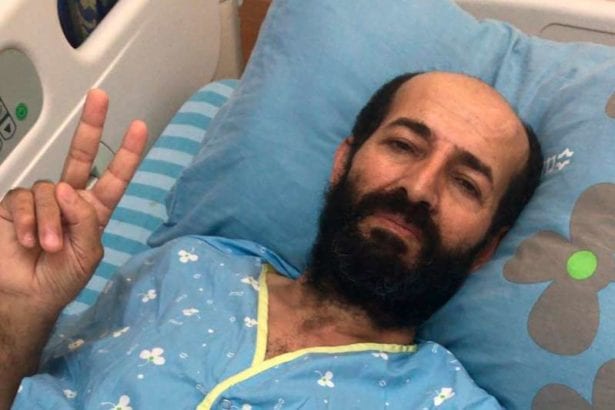 Maher al-Akhras, 49, is protesting his incarceration by Israel for nearly 80 days without even charging him with a crime…

A Palestinian man on a hunger strike for nearly 80 days since his arrest by Israel in late July is “on the verge of death”, Israeli rights group B’Tselem said on Monday.

Maher al-Akhras, 49, was arrested near Nablus and placed in “administrative detention”, a policy Israel uses to hold suspected fighters without charge.

The married father of six launched his hunger strike to protest the policy. He has been arrested several times previously by Israel, which accuses him of having ties to the Islamic Jihad armed group.

On Monday, about 40 people held a rally in the occupied West Bank city of Ramallah to support him.

“Our people will not let Maher al-Akhras down,” said Khader Adnan, who was one of those taking part in the rally and who has himself carried out several hunger strikes in Israeli captivity.

Adnan called on the international community and Palestinian leaders to pressure Israel over the case.

“Do more over the coming hours,” he said. “We are in the critical stage.”

Al-Akhras was transferred in early September to Kaplan Medical Center, south of Tel Aviv. His lawyers have appealed on multiple occasions to Israel’s Supreme Court for his release, including at a hearing on Monday.

Israel’s top court deferred a ruling on Monday’s request, saying the case remained under review, according to a summary of the hearing seen by AFP news agency.

The Palestinians and human rights groups say administrative detention, which was inherited from the British mandate, violates the right to due process since evidence is withheld from prisoners while they are held for lengthy periods without being charged, tried or convicted.

“Administrative detention is a crime and should end. We hold Israel fully responsible for his life and call for his immediate release,” said Qadura Fares of the Palestinian Prisoners’ Club last week.

About 355 Palestinians were being held under administrative detention orders as of August, including two minors, according to B’Tselem.

AP and Amnesty International: Are you just waiting for him to die?