Thirty-six far left Jewish groups from around the world have signed a statement condemning the conflation of anti-Semitism with criticism of Israel.

“As social justice organizations from around the world, we write this letter with growing alarm regarding the targeting of organizations that support Palestinian rights in general and the nonviolent Boycott, Divestment and Sanctions (BDS) movement, in particular,” the statement says. “These attacks too often take the form of cynical and false accusations of anti-Semitism that dangerously conflate anti-Jewish racism with opposition to Israel’s policies and system of occupation and apartheid.”

Among the U.S.-based groups to sign the statement are Jewish Voice for Peace, which initiated the statement; Jews for Palestinian Right of Return; Jews of Color & Sephardi and Mizrahi Jews in Solidarity w/ Palestine; and Jews Say No!

The letter calls on their governments to reject the International Holocaust Remembrance Alliance definition of anti-Semitism, which it says  “is worded in such a way as to be easily adopted or considered by western governments to intentionally equate legitimate criticisms of Israel and advocacy for Palestinian rights with antisemitism, as a means to suppress the former.”

The groups signing on support BDS to varying levels, the letter notes, including some that take no position.

“Israel does not represent us and cannot speak for us when committing crimes against Palestinians and denying their UN-stipulated rights,” the letter says.

These groups are courageously opposing the many more, larger, and more powerful Jewish groups opposing BDS, originating legislation against it, and promoting the new definition of antisemitism. 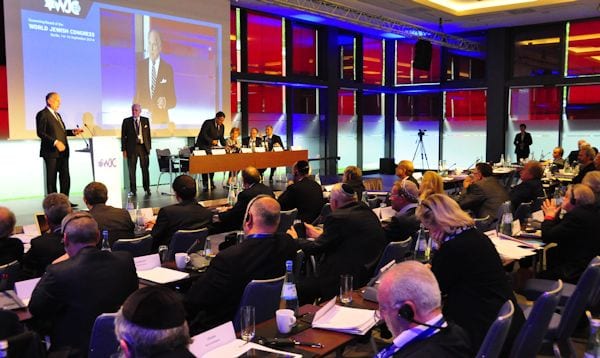 Photo is of the 2014 World Jewish Congress convention led by Ronald Lauder and chaired by David de Rothschild that urged “all countries to adopt a binding definition of anti-Semitic crimes” based on the Israel-centric definition. JTA reports that 68 British rabbis have just signed a letter supporting the new, Israel-centric definition of antisemitism. The BBC reports that England’s chief rabbi condemns Britain’s Labour Party for not fully adopting the new definition.