You Are Here: Home → Would Israel Blackmail a US Congressman? Should there be any doubt?

Would Israel Blackmail a US Congressman? Should there be any doubt? 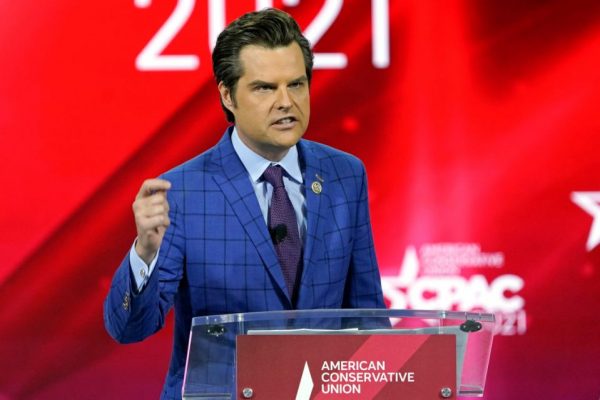 Text messages suggest that Israel may have been behind the alleged extortion of Congressman Matt Gaetz’ father. Presumably, Israel was prepared to use its political clout with Congress and the media to make Gaetz’ problems go away, in return for the money to fund a commando raid that would free Iranian prisoner Robert Levinson – delivering a blow to Iran and a major propaganda victory for Israel…

Israel has been involved in several stories currently making their way through the US media. The most fascinating tale concerns Republican Party Congressman from Florida Matt Gaetz. Gaetz is a Donald Trump loyalist who has up until recently been touted as the party’s future. Young, photogenic, and a “firebrand” defender of GOP priorities, he has been much in the news lately.

Per the New York Times coverage of the current story involving him “The Justice Department is investigating whether Gaetz… a close ally of former President Donald Trump, broke federal sex trafficking laws. The inquiry focuses on his relationships with young women who had been recruited online, and whether he had sex with a 17-year-old girl………..

[The involvement with] Israel really starts with an apparent extortion scheme linked to the investigation that has involved Gaetz’s father Don, a wealthy former president of the Florida State Senate. Following up on the Gaetz story, the Washington Examiner discovered that Don had been approached by a Florida lawyer named Don McGee [other reports give the name as David McGee] who promised that a payment of $25 million would make Matt’s “future legal and political problems go away.”

Don Gaetz subsequently contacted the FBI and wore a wire that recorded a second visit made by a former Air Force officer named Bob Kent, who explained that the money would be a loan for “Project Homecoming,” a plan to arrange the liberation of ex-FBI agent Robert Levinson, who is generally believed to be either dead or in prison after an ill-advised somewhat mysterious visit to Iran where he disappeared fourteen years ago.

And then the tale really takes off.

The American Conservative magazine has obtained a series of “authenticated” text messages between Scott Adams, creator of Dilbert, and Israeli New York Consulate General’s media officer, Jake Novak, which suggest that the Israeli government was associated with both Kent and McGee and might have been behind the extortion.

Presumably, Israel was prepared to use its political clout with Congress and the media to make Matt’s problems go away in return for the funding of a commando raid that would free Levinson and deliver both a blow to Iran and a major propaganda victory for Jerusalem.

Cartoonist Adams’ alleged connection with the Israeli Consulate is not at this point completely clear, though the texts would suggest that he is a trusted contact.

An angry Novak, referring to the Times article on the investigation, wrote to him complaining that “The backstory is that this is screwing up my efforts to free Bob Levinson. Gaetz’s dad was secretly f[u]nding us. So I’m very much wanting this to be untrue. I’ve got a commando team leader friend of mine nervously waiting for the wire transfers to clear.” He then goes on to claim that it was not extortion in a legal sense, “The real documents do not extort. And we only asked for $25 million as an estimate at first. We came way down.”

The two men also exchanged their views of the case against Matt Gaetz.

Novak wrote “Scoop I can’t report: Rep. Gaetz is the subject of a secret Grand Jury probe of sex with minors and possibly murder conspiracy. I trust the source. Charges/accusations are apparently ‘very credible.’”

Adams responds that “The allegations against him do not sound credible” with Novak answering “I don’t want to believe them but my source says it looks bad from closer in.”

Adams then texts “I’m betting against it but the extortion counterclaim sounds credible. Has witnesses apparently.”

Novak concludes that “Now the Gaetz’s have burned Kent AND Levinson.”

If the American Conservative documents are not part of some elaborate hoax, the evidence of how Israel systematically interferes in American politics is yet again clearly visible.

One of the most remarkable aspects of the story is the impression that Israeli consulate employee Jake Novak, who sounds somewhat like an intelligence officer, appears to believe that the exposure of the game he was involved in is annoying but no big deal, confident that Israel is never punished by Washington no matter what it does.

He also appeared to have inside information on a confidential Justice Department investigation. Beyond that, the possible extortion scheme itself may be based on a possible set-up “honey trap” followed by what amounts to the blackmailing of an American Congressman.

What exactly did the Israeli Consulate’s proxies McGee and Kent have on Matt Gaetz that might have impelled his wealthy father to fund an implausible rescue operation directed against Iran which could easily escalate into a major international incident, possibly even a war?

There are clearly documents, recordings, and transcripts…will we the public ever see or hear them? If this all begins to smell like the Jeffrey Epstein saga it should and it is just one more good reason not to trust the Israelis on any issue. One wonders if anyone in the FBI or the Joe Biden Administration has the courage to follow this investigation through to wherever it might lead.

Philip M. Giraldi, Ph.D., is a former CIA counter-terrorism specialist and military intelligence officer who served nineteen years overseas. He is Executive Director of the Council for the National Interest, which seeks to promote a U.S. foreign policy in the Middle East that is consistent with Americans’ values and interests.