You Are Here: Home → Will Israel Become a UN Security Council Member? 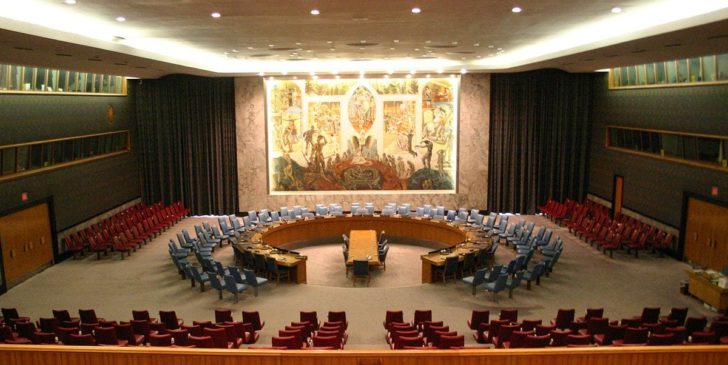 Israel has desperately sought to be legitimized by the UN, while it has done its utmost to delegitimize the UN.

There is a great irony in the fact that Israel is seeking a seat at the United Nations Security Council (UNSC).

Since its establishment atop the ruins of Palestinian cities and villages in 1948, Israel has had the most precarious relationship with the world’s largest international body.

It has desperately sought to be legitimized by the UN, while it has done its utmost to delegitimize the UN.

Following a resolution at the UN Human Rights Council (UNHRC) condemning Israel’s human rights abuses in the Occupied Palestinian Territory in March 2014, Israeli Prime Minister, Benjamin Netanyahu, then accused the UN of being “absurd”. He vowed to “continue to denounce and expose” the UN “procession of hypocrisy.”

For many years, Israeli leaders and government officials have made it a habit of undermining the UN and its various bodies and, with unconditional support from Washington, habitually ignored numerous UN resolutions regarding the illegal occupation of Palestine.

To a certain extent, the Israeli strategy of using and abusing the UN has worked. With US vetoes blocking UN attempts to pressure Israel to end its military occupation and human rights violations, Israel was in no rush to comply with international law.

But two major events have forced an Israeli rethink.

First, in December 2016, the US abstained from a UN resolution that condemned Israel’s illegal settlement activities in the Occupied Palestinian Territories.

By breaking with a decades-long tradition of shielding Israel from any international censure, it appeared that even Washington’s seemingly undying allegiance to Tel Aviv was uncertain.

Second, the Palestinian-led Boycott, Divestment and Sanctions (BDS) movement began changing the dynamics of international politics regarding the Israeli occupation.

The movement, which began as a call by Palestinian civil society to hold Israel accountable for its violations of Palestinian human rights, grew rapidly to become a global movement. Hundreds of local BDS groups multiplied around the world, joined by artists, academicians, union members and elected politicians.

Within a few years, BDS has registered as a serious tool of pressure used to denounce the Israeli occupation and demand justice for the Palestinian people.

UNHRC quickly joined in, declaring its intention to release a list, thus exposing the names of companies that must be boycotted for operating in illegal Israeli settlements.

The human rights group’s efforts were coupled by repeated condemnations of Israel’s human rights violations as recorded by the UN cultural agency, UNESCO.

This meant that UN bodies that do not allow for veto-wielding members grew in their ability to challenge the UN Security Council.

The actions of UNHRC and UNESCO spurred a determined Israeli-American campaign to delegitimize them.

Since the Donald Trump Administration’s advent to power, and with the help of his ambassador to the UN, Nikki Haley, Washington has waged a war against the UN, using intimidation and the threats of withholding funds.

UNESCO insisted on its position, despite the cutting off of funds. Meanwhile, UNHRC decided to go along with publishing the list of companies, despite US threats to pull out of the human rights body altogether.

Israeli officials fumed. Deputy Foreign Minister Tzipi Hotovely charged that “The UN is playing with fire”, threatening that such initiative will cause further loss of UN budget.

She even declared that the US and Israel are working together to start a ‘revolution’ at the Human Rights Council through a joint ‘action plan.’

Signs of this oddly termed ‘revolution’ are already apparent. Aside from choking off UN bodies financially, Israel is lobbying countries in the South that have traditionally exhibited solidarity with Palestinians due to the common historical bonds of foreign oppression and anti-colonial struggles.

Netanyahu had just concluded a trip to Latin America, considered the first by a sitting Israeli Prime Minister. In the last leg of his trip in Mexico, he offered to ‘develop Central America.’

The price is, of course, for Latin American countries to support Israel’s occupation of Palestine and turn a blind eye to its human rights violations in Palestine.

The irony that, fortunately, did not escape everyone is that last January, Netanyahu declared his support of Trump’s promise to wall off the US-Mexico border and force Mexico to pay for it.

It remains to be seen how Israel’s efforts will win Latin America to Israel’s side, considering the latter’s terrible record of supporting fascist regimes and subverting democracy.

The Israeli Prime Minister’s charm offensive was planned to include Togo in October to attend the Israel-Africa Summit. Thanks to the efforts of South Africa, Morocco, among other countries, the summit was cancelled due to the fact that over half of African countries were planning to boycott it.

The setback must have been a major diplomatic embarrassment for Tel Aviv as Netanyahu has made African diplomacy a pillar in his foreign policy. Last June, he visited Uganda, Kenya, Ethiopia, Tanzania and Rwanda. He was accompanied by a large delegation of business executives. Earlier in June, he promised African leaders at the Economic Community of West African States (ECOWAS) summit in Liberia to supply them with agricultural technology that would stave off droughts and food scarcity.

Not all African leaders allowed themselves to be manipulated by Tel Aviv.

But the Israeli tactic is certainly becoming more defined and emboldened. Tel Aviv’s aim is to undercut the support of Palestinians at the UN General Assembly, and sabotage the work of UN bodies that exist outside the realm of US power.

Meanwhile, it also wants to secure a seat for itself at the UN Security Council. The assumption is that, with the support of Haley at the UN, such a possibility is not far-fetched.

In addition to the five-permeant veto-wielding UN Security Council members, ten-member countries are elected on a two-year term basis. Israel’s charm offensive in Latin America, Africa and Asia is meant to ensure the needed vote to grant it a seat in the 2019-2020 term.

The vote will take place next year, and Israel will stand against Germany and Belgium.

Israel’s strategy of elevating its status at the UN can also been seen as an admission of failure of Tel Aviv’s antagonistic behavior. However, if Israel wins that seat, it is likely to use the new position to strengthen its occupation of Palestine, as opposed to adhering to international law.

It is unfortunate that the Arabs and the Palestinian Authority are waking up to this reality quite late. Israel has been plotting for this moment for years—since 2005 under the premiership of Ariel Sharon—yet the PA is only now requesting an Arab League strategy to prevent Israel from reaching that influential position.

What Palestinians are counting on, at the moment, is the existing historical support that the Palestinian people have among many countries around the world, especially in the global South.

Most of these nations have experienced colonization, military occupation and had their own costly and painful liberation struggles. They should not allow a colonialist regime to sit atop of the UN, obstructing international law while preaching to world about democracy and human rights.