You Are Here: Home → Why Is the U.S. Playing Along With Israel’s Veto Over American Weapons Sales?

Why Is the U.S. Playing Along With Israel’s Veto Over American Weapons Sales? 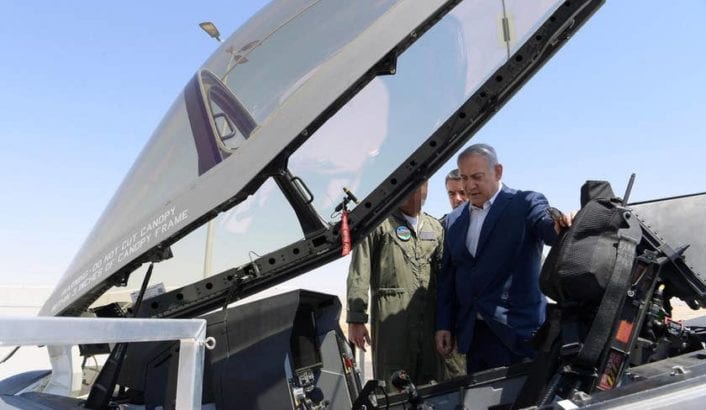 The facts are unbelievable. The U.S. Congress passed special legislation that requires the United States to hold a “consultation” with its ostensible ward, Israel, before signing arms deals in the Middle East. In other words, Israel has something close to veto power over America, rather than the opposite.

Reality is crazy; it surpasses any fiction. A tiny country that relies on the kindness of a global superpower is giving orders to said superpower, the most powerful on the planet, and to other powerful Western countries, about to whom it should sell weapons, or mainly, to whom it shouldn’t.

The facts are unbelievable. The U.S. Congress passed special legislation that requires the United States to hold a “consultation” with its ostensible ward, Israel, before signing arms deals in the Middle East. In other words, Israel has something close to veto power over America, rather than the opposite.

In 1994, for instance, then-Prime Minister Yitzhak Rabin was kind enough, out of the goodness of his heart, to allow U.S. President Bill Clinton to sell American F-16 fighter planes to the United Arab Emirates. And America profited.

In 2020, the question is whether Israel will be kind enough to allow its patron, America, to sell F-35 fighters to the UAE, which is making peace with Israel. One’s jaw simply drops. Why are they even asking Israel?

Is this Israel? And is this America? Which is the superpower, and which the ward? Where did this madness come from that allows Israel to thwart arms deals between other countries?

That is how powerful the Israeli and Jewish lobby in Washington is. That is how much power and influence Israel has over Germany, too.

Consider the AWACS deal with Saudi Arabia in 1986. A sale of five American early-warning and control planes to an important U.S. ally, which was located far from Israel, became the target of a huge lobbying and pressure campaign in which said lobby tried to thwart the deal.

But in the end, U.S. President Ronald Reagan decided what should have been self-evident. He said no. “It is not the business of other nations to make American foreign policy,” he said, and sold the planes to Saudi Arabia. How shocking.

It began with a ridiculous phrase coined by Shimon Peres: “Israel won’t be the first to introduce nuclear weapons into the Middle East.” Since he said that, Israel – according to foreign reports, of course – has not only become the first, but also the last. Only Israel is allowed to arm itself with doomsday weapons.

There’s obviously no moral question here; nuclear weapons are immoral for any country. Nor should one complain about Israel for wielding such great influence. What puzzles me is all those who cooperate with this delusional game, and whether it will continue forever.

According to Israel, only it has the right to arm itself with every possible or impossible weapon in the world. In contrast, it has demanded in advance that the imaginary Palestinian state, which will never arise, be completely disarmed.

Why should Palestine be disarmed but not Israel? Who spills more blood and who endangers the other more, Israel or the Palestinians? And who has started more wars?

Israel certainly can’t argue that its intentions are pacifistic. And if so, on what basis does it have the right to forbid other countries what it is permitted to do with no restrictions?

The name of the game is preserving Israel’s “qualitative military edge,” even over countries that have virtually no chance of ever being at war with it, and even over countries whose enemies are also Israel’s enemies, like the UAE. Is Dubai going to launch its stealth planes against Israel?

Aha, they say, but maybe there will be regime change there someday. Well, what if there’s regime change in Israel? Who can guarantee that some leader won’t arise here someday who will want to conquer the whole Middle East? These are questions that it’s virtually forbidden to discuss.

It’s Israel’s right to do everything it can to keep weapons away from others. But it’s impossible to ignore the question of whether this aggressive, extortionate behavior will keep paying off forever.

Somebody in the courtyards of Dubai or the streets of Cairo ought to ask sometime, “How come Israel is allowed to have the F-35 and we aren’t?” But for now, this question sounds bizarre.

Gideon Levy is a Haaretz columnist and a member of the newspaper’s editorial board.