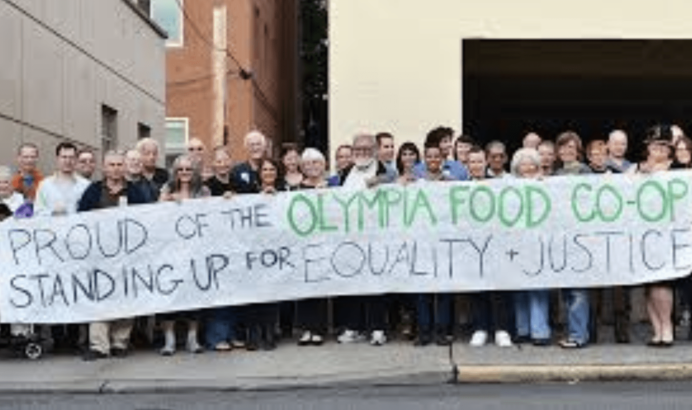 The Rachel Corrie Foundation for Peace and Justice is thrilled to share today’s news from the Center of Constitutional Rights regarding the lawsuit against former Olympia Food Co-op board members and the decision to boycott Israeli goods. Please read the press release below and share this important victory with others!

March 9, 2018, Olympia, WA – Today, a Washington State court ended a seven-year litigation battle against former volunteer board members of the Olympia Food Co-op over their decision to boycott Israeli goods. The lawsuit was first filed in 2011 by five co-op members seeking to block the co-op’s boycott and to collect monetary damages against the board members. Two of the five members pulled out of the case, and none of the defendants originally named in the case remains a board member of the co-op. The court granted the motion for summary judgment from the former board members, who were represented by Center for Constitutional Rights (CCR) and co-counsel, finding the plaintiffs had no standing to bring a case because they failed to show the co-op was injured.

“We are pleased that the court has dismissed this meritless lawsuit.  It is a relief and a vindication for our clients, and a victory for everyone who supports the right to boycott,” said Center for Constitutional Rights Deputy Legal Director Maria LaHood, who argued today.

Earlier this week, CCR filed with the court a recently produced document (Exhibit B) in which plaintiffs celebrated the lawsuit’s success in discouraging other co-ops from boycotting Israeli goods.

In 2017, the co-op board of directors passed a resolution affirming that the litigation-which was purportedly brought on behalf of the co-op-was not approved by the co-op, is not in the co-op’s interest, and should be dismissed.

Lawyers say the lawsuit is part of a broad and growing pattern of suppressing activism in support of Palestinian rights, a phenomenon that CCR and Palestine Legal have documented and called the “Palestine Exception” to free speech. CCR and Palestine Legal report the widespread use of administrative disciplinary actions, harassment, firings, legislative attacks, false accusations of terrorism and antisemitism, and baseless legal complaints. Between 2014 and 2016, Palestine Legal responded to 650 such incidents of suppressiontargeting speech supportive of Palestinian rights.

“We are thrilled to be found in favor of for a second time on this frivolous lawsuit. We are proud of our attorney team, and proud of our community for supporting us, and we are grateful for the outpouring of solidarity we’ve received from around the world,” said defendant Grace Cox. “Taking a stand for economic and social justice is at the heart of the co-op’s mission. Given Israel’s ongoing violations of Palestinian human rights, we would have failed in this mission had we not approved a boycott.”

The case was initially dismissed, in 2011, under a Washington State statute that protected against Strategic Lawsuits Against Public Participation (SLAPPs). The Washington Supreme Court later struck down the SLAPP law in 2015, sending the case back to the lower courts. After engaging in discovery, plaintiffs essentially abandoned the litigation until reviving it recently.

The Center for Constitutional Rights is dedicated to advancing and protecting the rights guaranteed by the United States Constitution and the Universal Declaration of Human Rights. Founded in 1966 by attorneys who represented civil rights movements in the South, CCR is a non-profit legal and educational organization committed to the creative use of law as a positive force for social change.