You Are Here: Home → Voting for World Zionist Congress heats up 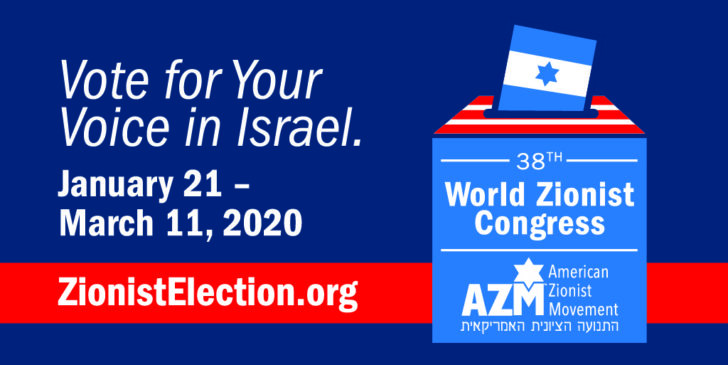 Voting has begun for the World Zionist Congress, as Israel partisans on the left and the right vie for influence… among other things, the WZC decides how $5 billion will be spent… (Palestinians need not apply)

Israel’s Jerusalem Post newspaper reports that “the stakes are extremely high” in the current election for members of the World Zionist Congress (WZC).

Elections are held every five years. Voting began Jan. 21 and will end in two months.

The Jerusalem Post explains that the WZC is “the legislative body that determines the policies of the world’s leading Jewish organizations – the World Zionist Organization (WZO), the Jewish Agency of Israel (JAFI), the Jewish National Fund (JNF) and Keren Hayesod.

“The WZC is the body that makes major policy decisions concerning the future of Zionism, Aliyah [‘ascending’ to Israeli citizenship] and absorption, Israeli advocacy worldwide, Jewish education and the war against antisemitism, settlement in Israel and other vital issues for Israel and the Jewish people’s future.”

According to the WZC website: “The Zionist Congress is the supreme ideological and policy-making body of the World Zionist Organization. It convenes once every five years in Jerusalem and brings together over 2,000 Zionist activists from around the world (750 delegates and twice as many alternates). This gathering represents the entire political and religious spectrum of the Zionist movement.”

The Jewish Forward reports that voting surged in the first day of voting. It reports: “Voting is open on the American Zionist Movement website until March 11. It will determine the American delegation — 152 of the 500 total participants — to the World Zionist Congress in Jerusalem in October, which will in turn determine $5 billion in spending on Jewish causes over the next five years.”

Mondoweiss reports that “over 1,500 candidates from 15 slates are running for the U.S.-held seats. Approximately 56,000 US Jews voted in the last election.”

Any permanent resident of the US who is Jewish, pays the the $7.50 voter fee, and signs a statement affirming that they believe “a Jewish, Zionist, democratic and secure State of Israel to be the expression of the common responsibility of the Jewish people for its continuity and future” may vote.

The election has drawn a heated response as Israel partisans from the left and the right battle for influence.

The Forward reports: “The Orthodox party Eretz HaKodesh warns on its website that high Orthodox turnout could “prevent values of the liberal movements from infiltrating the Torah atmosphere of Eretz Yisrael,” and the Zionist Organization of America warned in an email that if they don’t win, other parties “will turn the World Zionist Congress into the anti-Zionist Congress.”

The head of the American Forum for Israel urges conservatives to vote, warning that “extreme-Left figures” like Peter Beinart and Jeremy Ben-Ami, the president of J Street, “have entered the fray to move the balance of power even further Left.”

While some may view J Street as almost pro-Palestinian, blogger Richard Silverstein reports that “J Street endorsed Israeli invasions of Gaza; attacked international investigations of Israeli war crimes, such as the Goldstone report; rejected the boycott, divestment and sanctions movement (BDS) and Hamas; and urged the Obama administration to reject a UN resolution demanding an end to illegal Israeli settlements.”

According to the WZC and its members, the land that used to be named Palestine belongs to Jews worldwide; the Palestinians who live there (or used to live there before they were forced out) are to have minimal say in matters that control their lives.

Author Donna Nevel points out in Mondoweiss that the WZC holds “that Israel belongs to the Jews of the world and that, therefore, Jews outside of Israel deserve the right to determine policies, sit on boards, and direct funding and resources that, among other things, control the day to day lives of Palestinians.

“Israel, together with the WZO and other Zionist institutions, have a long history of privileging Jews at the extreme expense of Palestinians.

“Beginning with the Nakba, when 750,000 Palestinians were forced out of their land and homes during Israel’s creation, Palestinian citizens of Israel have continued to be treated as third-class citizens subjected to racism and anti-democratic policies and actions, as well as ongoing intimidation and harassment. Palestinians in the occupied territories have routinely endured ongoing land theft, home demolitions, military checkpoints, arbitrary arrests, torture, and administrative detentions without trial or charge, and have no say in what happens to them.

Nevel emphasizes that participating in the WZC elections “violates the Palestinian-led, global call for Boycott, Divestment, and Sanctions (BDS), which is one of the most effective and ethical ways to join with Palestinians in the struggle for justice. Participating in these elections doesn’t begin to tackle Israel’s unjust, apartheid system and its underlying Zionist ideology, but, rather, feeds that system and ideology and gives them more roots.”

Below is a promotional video for the election: