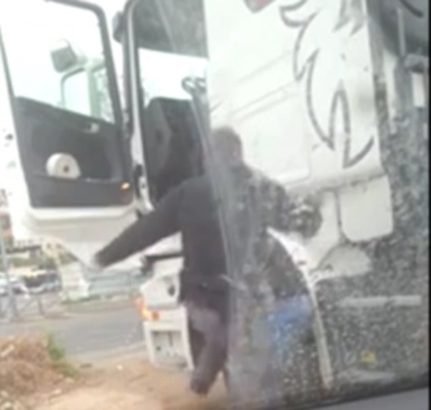 In the recording that circulated on social media, the police officer and the truck driver are seen engaged in a heated conversation that eventually divulged into violence with the officer seen headbutting the motorist and later striking him and kneeing him in the groin.

Bystanders are then seen flocking to the scene and attempting to turn the police officer’s attention from the visibly shaken truck driver. More strikes are exchanged between the crowd and the officer, who is seen kicking the driver in the back before the recording ends.
The incident, which took place at the parking lot of the Interior Ministry office in Wadi al-Joz, reportedly ensued over an issue with the truck’s parking.

In response to inquiries regarding the incident, Israel Police issued a statement saying it represented “extreme and abnormal behavior that does not comply with the behavior expected of Israel Police officers.”

Police added that with the receipt of the video, the officer involved was immediately suspended and due to stand in a hearing on his continued tenure with the authorities. Meanwhile, authorities were further reviewing the footage of the incident.

“The behavior of the police officer filmed violently attacking an east Jerusalem resident is of the utmost gravity and disgraceful,” Erdan said. “Such behavior harms the entire police force and the police acted correctly to immediately suspend the officer.”

“There is no place for such behavior among police and I hope that the Israel Police will reach a vigorous judgement against him for his unacceptable behavior,” he concluded.

Meanwhile, Joint List lawmaker Tibi said he had turned to the chief of the Israel Police and Erdan to take action.

“We are talking about the brutal behavior of a security official against a truck driver from east Jerusalem,” said the member of the Israeli-Arab Knesset faction. “I demand his [the officer’s] immediate arrest and a trial of him and his two companions who joined the fist fight against the local drivers.”

Tibi added that he had spoken with a witness who claimed to have filmed the brawl.

The truck driver, 50-year-old Mazen Shwiki, spoke about the incident on Thursday morning and attested to suffering from shortness of breath due to fractures in his sternum that were caused as a result of the assault.

“I got to work this morning in my truck which is by the Interior Ministry in the Wadi Joz neighborhood, as always,” he recounted. He said that the policeman who attacked him had accused him of hitting his car while parking the truck and that when he attempted to apologize and offered to help fix the damage the was caused to the policeman’s car, the latter launched his attack on him for no apparent reason.

“The policeman started to curse me and used derogatory language, and then he butted my head and started hitting me for no reason. All that, even though I admitted that I hit his car,” Shwiki recollected.