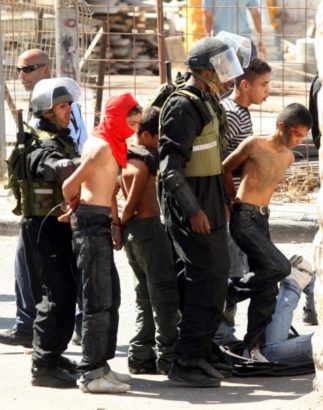 An important opportunity to demonstrate support for Palestinian rights is coming up this weekend in Washington DC.

The powerful American Israel Public Affairs Committee (AIPAC) will be having its national convention to demonstrate its power. AIPAC has an annual budget of about $60 million, an endowment of $100 million, and it uses that money to promote unconditional support for Israeli apartheid, oppression of Palestinians, and violence against Israel’s neighbors.

Numerous U.S. politicians from both parties will attend this conference and swear their devotion to Israel in the hope that in their next political campaign they will receive AIPAC’s support – and, even more – avoid its dreaded displeasure.

AIPAC often brags about its power, describing how it takes over both our nation’s capital and student governments – see videos below. 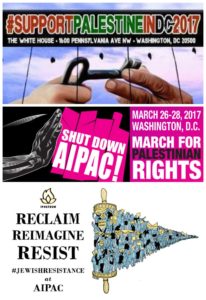 Fortunately, three groups have organized events and demonstrations during that time to support Palestine: Support Palestine in DC 2017, CodePink, If Not Now.

We are grateful to these groups and feel it’s extremely important that as many of us as possible go to Washington. It’s time to demonstrate that there are multitudes of us who want our elected representatives to support justice, not oppression! Human rights, not militarism! Equality, not racism!

We know that like all movements, our movement for justice has internal divisions and disagreements. We also know that such divisions weaken our movement, which already faces such overwhelming challenges.

Israeli forces have just abducted at least 13 more Palestinians overnight, including a young female student. Palestinians in both Gaza and the West Bank continue to live in what is essentially a prison (see my article), Israeli forces repeatedly shell Gaza, and Israeli soldiers just killed a 16-year-old boy on Friday.  Millions of Palestinians are prevented from returning to homes that have been stolen by Israel over the past seven decades.

On top of that, Israel and the U.S. have forced the UN to take down a report documenting that Israel is guilty of apartheid, and the Trump administration, while proposing deep cuts to numerous programs, has announced that the massive U.S. aid to Israel will continue undiminished. On average, Israel receives 7,000 more US aid per capita than other people around the world. And now AIPAC and the Israel lobby are pushing attacks on Iran.

It is essential that this weekend we put our differences aside, focus on the urgency of our mission, and turn out for Palestine!

Join whichever event you choose, all three, or just demonstrate independently. The main thing is to be there and show your support for justice, peace, and Palestine!