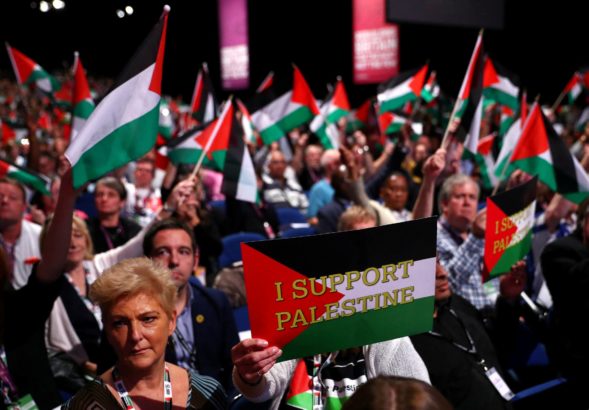 The UK Labour Conference agrees with human rights orgs that have labelled Israel an apartheid state, and condemns “the ongoing Nakba in Palestine,” as well as Israel’s attacks on the Al Aqsa mosque, forced displacements from Sheikh Jarrah, and the deadly assault on Gaza.

[NOTE: Those familiar with the Israel-Palestine issue have known for years that Israel is an apartheid regime – but also know that the bias in US mainstream media has led to a shortage of deep reporting on stories critical of Israel (If Americans Knew has been reporting on it since the organization’s inception). For a comparison of media coverage in the US vs. Europe, watch The Occupation of the American Mind.]

The UK Labour Party Conference Tuesday voted in favour of a motion to identify Israel as a state practicing the crime of apartheid, making it the first major political party in Europe to adopt such a position. The motion commits the Labour party to implementing sanctions including ceasing UK-Israel arms trade and trade with illegal Israeli settlements.

“Conference condemns the ongoing Nakba in Palestine, Israel’s militarised violence attacking the Al Aqsa mosque, the forced displacements from Sheikh Jarrah and the deadly assault on Gaza,” said the motion.

The motion noted reports by Human Rights Watch and B’Tselem, which earlier in the year reached a landmark conclusion that Israel was practising the crime of apartheid as defined by the UN. The two reports highlighted how Israel’s systematic oppression of the Palestinian people amounted to the crime of apartheid.

Their conclusions echoed the findings of the UN and prominent experts on international law as well as two former Israeli ambassadors.

Labour members also welcomed the International Criminal Court’s decision to hold an inquiry into abuses committed in the occupied Palestinian Territory since 2014.

Calling for a boycott of Israel the motion said: “Conference resolves that action is needed now due to Israel’s continuing illegal actions and that Labour should adhere to an ethical policy on all UK trade with Israel, including stopping any arms trade used to violate Palestinian human rights and trade with illegal Israeli settlements.”

“Conference resolves to support ‘effective measures’ including sanctions, as called for by Palestinian civil society, against actions by the Israeli government that are illegal according to international law,” the motion continued noting, in particular, the need to “ensure that Israel stops the building of settlements, reverses any annexation, ends the occupation of the West Bank, the blockade of Gaza, brings down the Wall and respects the right of the Palestinian people, as enshrined in international law, to return to their homes.”

It urged the Labour Party to “stand on the right side of history and abide by these resolutions in its policy, communications and political strategy”.

Despite the adoption of the motion it is unclear how the leadership of the Labour party will react to such an unprecedented call. Party leader Keir Starmer has been locked in a bitter row with members who support the application of international law when it comes to the rights of the Palestinian people.