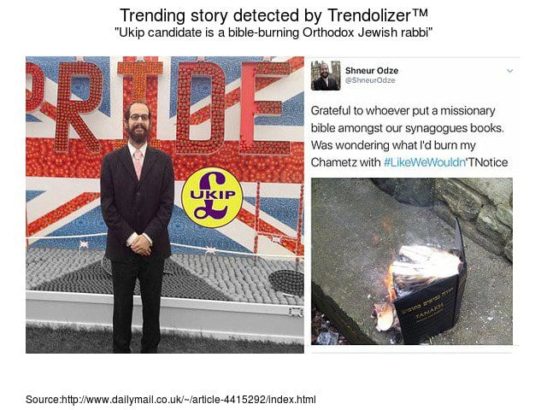 The chair of the “Friends of Israel” caucus of Britain’s UK Independence party (UKIP) apologized recently for tweeting a picture of himself burning a New Testament.

The Jewish Telegraphic Agency (JTA) reports that Shneur Odze, a candidate for mayor of Manchester, found the New Testament in his synagogue.

He took the offending volume outside and set it on fire, then posted photos of the book burning and wrote on Twitter:  “Grateful to whoever put a missionary bible amongst our synagogue’s books. Was wondering what I’d burn my Chametz with.”

According to JTA, Odze “felt he had no choice but to burn the book because he did not want to pass on what he believes is false religion to someone else and said that throwing a religious text in the garbage was distasteful, especially because it also contains the Five Books of Moses.”

The Times of Israel reports that the New Testament was in a Hebrew-English Bible published by the Society for Distributing Hebrew Scriptures, and had been and placed in the synagogue without permission by a member of the Christian group.

JTA reports that Odze, a former city councilman for north London for the Conservative Party, is a rabbi and member of Chabad-Lubavitch.

RELATED: The Extremist Origins of Education and Sharing Day: Why is the US Honoring a Racist Rabbi?