You Are Here: Home → Two Palestinians Killed in Weekend Clashes With Israeli Army 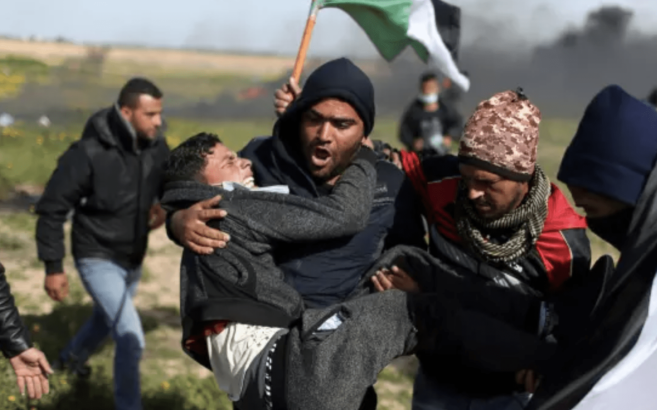 A wounded Palestinian is evacuated during clashes with Israeli troops at a protest against Trump’s decision on Jerusalem, near the border with Israel in the southern Gaza Strip March 9, 2018.\ Credit: IBRAHEEM ABU MUSTAFA/ REUTERS

Palestinian officials say Amir Omar Shahada, 19, was shot in the chest and later succumbed to his wounds in a West Bank hospital

A Palestinian teen was killed during clashes with Israeli army forces near the West Bank city of Nablus Saturday, according to a Palestinian Red Crescent spokesperson.

Amir Omar Shahada, 19, was shot in the chest in the village of Urif, said Ghassan Douglas, the Palestinian Authority official in charge of monitoring settlement activity in the northern West Bank. A 16-year-old Palestinian boy was shot in the leg, Douglas added.

The Palestinian Health Ministry confirmed that a young Palestinian man who was rushed to a hospital in Nablus in critical condition died of his wounds.

According to Douglas, the incident began when confrontations erupted between Israelis from the settlement of Yitzhar and the residents of Urif. Israeli forces arrived at the scene and clashes erupted, during which Israeli soldiers used live fire.

According to the IDF, Palestinians from Urif headed toward Yitzhar earlier in the day and a “mutual confrontation between the Palestinians and settlers” ensued. Israeli forces who were called to the scene deployed riot-dispersal methods against the Palestinians, followed by live fire. The IDF says the incident is being investigated.

The IDF statement contradicts Palestinian reports, which claim that the settlers from Yitzhar were the ones to descend to Urif and initiate the conflict.

According to settlers, two Palestinians climbed up toward Yitzhar near the end of Shabbat holding a burning object. They claim the clash erupted after settlers set out to “push the Palestinians back.” The settlers added that Palestinians threw rocks at the vehicle of the settlement’s security chief earlier in the day, shattering his car window.

Meanwhile, reports in Gaza said that one man was killed and three were hurt in an explosion in the northern part of the Strip. Reports said the blast occurred when explosives they were handling accidentally went off.

This is the second such incident in a day. Muhammed Zain Jabri, age 24 from Hebron, was shot by live fire and later succumbed to his wounds in hospital Friday, the Palestinian Health ministry said. According to eyewitnesses in Hebron, Jabri was handicapped. Palestinian media outlets say Jabri was deaf and mute.

Dozens of Palestinians protested throughout the West Bank, including in the cities of Hebron, Nablus, Ramllah and in Kfar Kadum. Protests come amid tensions that rose after U.S. President Donald Trump recognized Jerusalem as Israel’s capital.

By Jack Khoury and Yaniv Kubovich

A Palestinian man was killed in Hebron and multiple others were wounded in clashes with Israeli forces in the West Bank and Gaza on Friday, the Palestinian Health Ministry said.

Muhammed Zain Jabri, age 24 from Hebron, was shot by live fire and taken to a nearby hospital where he later succumbed to his wounds, says the ministry. According to eyewitnesses in Hebron, Jabri was handicapped. Palestinian media outlets say Jabri was deaf and mute.

The military said that protesters were throwing firebombs at the soldiers, and the man was about to throw a firebomb at the troops before he was shot. The army said the incident will be reviewed.

Dozens of Palestinians protested throughout the West Bank on Friday including in the cities of Hebron, Nablus, Ramallah and in Kfar Kadum. Protests come amid tensions that rose after U.S. President Donald Trump recognized Jerusalem as Israel’s capital.

The Health Ministry in Gaza reported three wounded in clashes by the border with Israel, one severely and two moderately. The clashes took place east of Jabalya refugee camp, north of Gaza City.

In reference to Hamas protests planned to mark Palestinian Nakba Day, head of Hamas’ political Bureau Ismail Haniyeh said “We cannot control the tens of thousands of Palestinian citizens in the Gaza Strip who went on marches to the north, east and south in protest of the continued blockade of Gaza.”