You Are Here: Home → Two more Palestinians die after being shot by Israeli soldiers

Two more Palestinians die after being shot by Israeli soldiers 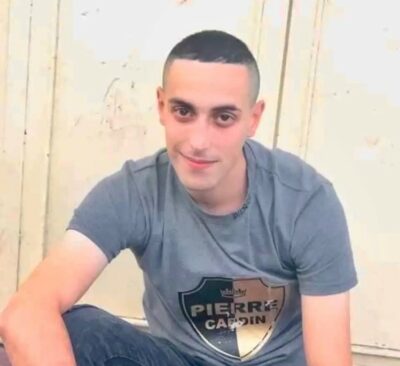 On Wednesday night, the Palestinian Health Ministry confirmed the death of a young Palestinian man who was shot and seriously injured at dawn when the soldiers invaded Nablus city, in the northern part of the occupied West Bank, killed a child, and injured 32 young men.

The Health Ministry said the young man, Mohammad Hisham Abu Keshik, 22, was shot with a live round in the abdomen and remained in critical condition until he succumbed to his wounds.

The Palestinian was shot with an expanding bullet that caused serious damage to his abdominal organs and resulted in excessive bleeding.

His family said Mohammad was far from where the army invaded Nablus and exchanged fire with Palestinian fighters near Joseph’s Tomb, east of the city.

The Health Ministry said the soldiers shot five Palestinians who were rushed to Rafidia governmental hospital in Nablus and added that one of the wounded suffered a serious gunshot wound to the heart, one was shot with an expanding bullet in the abdomen resulting in serious damage to his intestines that were protruding out of his body, in addition to one who was stuck with a concussion grenade in the head, and another Palestinian who was shot in the arm.

The Palestinian who was shot in the heart, Ahmad Amjad Shehada, only sixteen years of age, succumbed to his serious wounds.

Furthermore, the Palestinian Health Ministry has confirmed, Wednesday night, the death of Mohammad Ahmad Hasan Herzallah, 30, who succumbed to serious wounds he suffered after the soldiers shot him on July 24th when the army also killed two Palestinians.

The Palestinian Health Ministry has confirmed, Wednesday night, the death of a Palestinian who succumbed to serious wounds he suffered after the soldiers shot him on July 24th when the army also killed two Palestinians.

The Health Ministry said the young man, Mohammad Ahmad Hasan Herzallah, 30, was seriously injured by Israeli army fire in Nablus, in the northern part of the occupied West Bank.

The Health Ministry added that the Palestinian was instantly rushed to surgery after a headshot wound and remained in critical condition at the Intensive Care unit of a hospital in Nablus until he succumbed to his serious wounds.

The Palestinian underwent several surgeries in Nablus and was moved to Beit Jala hospital in Bethlehem before he was transferred to the Istishari Arab Hospital in Ramallah where he was pronounced dead.

Mohammad was among nineteen Palestinians injured when Israeli soldiers carried out a dawn invasion into the al-Yasmina neighborhood Old City of Nablus, in Nablus city, and killed two young men, Abboud Sobeh, 29, and Mohammad al-Azizi, 22.

On Wednesday dawn, Israeli soldiers killed a child, Ahmad Amjad Shehada, 16, and injured 32 Palestinians, one seriously, in addition to causing dozens to suffer the effects of tear gas inhalation, during protests after the army accompanied dozens of colonizers into Nablus.

Israeli soldiers have killed 202 Palestinian, 150 of them in the West Bank and 52 in the Gaza Strip, since the beginning of this year, 2022.