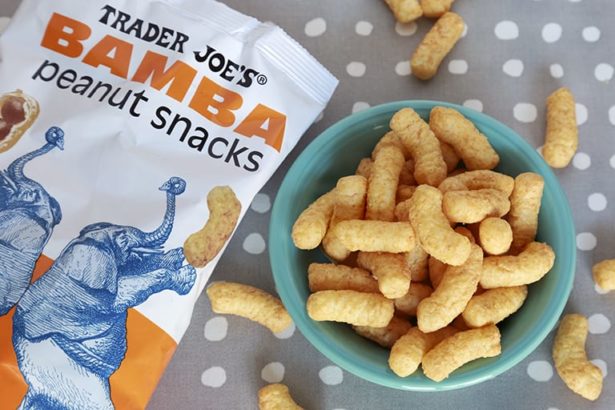 In violation of the international boycott of Israel over its human rights abuses, which have caused stunting of Gazan children, Trader Joe’s is promoting Bamba, an Israeli-made snack. Meanwhile, the company is part of a project against hunger in New England. The Osem Group, that produces Bamba, includes Nestlé, which is being boycotted for practices that cause infant malnutrition….

Trader Joes’ has just announced that it will be selling a snack made for it in Israel, “Trader Joe’s Bamba Peanut Snacks.”

The announcement reports that Bamba is “the  best-selling snack in Israel” and crows that it’s one of the few grocery stores that carry it: “Bamba is tricky to find in general (most U.S. grocers don’t carry the stuff).”

Trader Joe’s decision to carry this product violates an international boycott against Israel for its violence against Palestinians and decades long oppression. Israel regularly invades Palestinian communities and  has perpetrated a blockade against Gaza’s inhabitants for over ten years. [More information on this below.]

The company that produces Bamba in Israel, Osem, calls itself “as Israeli as Israeli can be.” Osem’s website says: “Osem’s history and the stages of its development are directly and closely intertwined with the growth of the State of Israel as a whole. The warmth, kindness, solidarity and courage that are characteristic of Israel are all building stones of Osem Group.”

Osem says it works “to strengthen and advance the Israeli food industry and the story of the State of Israel as a whole.”

The company has been operating in the U.S. since the early 1960s. Among its many brands are Sabra and Veggie Patch.

Osem & Nestlé, subject of another boycott

In the 1990s the Osem group began partnering with Nestlé, a company that originated in Switzerland but “became over time a world-wide international holding company.”

In 1998 Prime Minister Benjamin Netanyahu gave Nestlé the Jubilee Award, “the highest tribute ever awarded by the State of Israel in recognition of those individuals and organizations,that through their investments and trade relationships, have done the most to strengthen the Israeli economy.” Nestle now holds Osem and is part of the Osem Group.

Nestlé has  been boycotted since 1977 “because it contributes to the unnecessary death and suffering of infants around the world by aggressively marketing baby foods in breach of international marketing standards.”

Oscar-winning director Danis Tanovic produced a film about a former Nestlé baby milk salesman who opposed the industry when he realized that babies were dying as a result of his work pressuring doctors to promote formula.

Osem’s website says:  “when the Israeliness of Osem Group meets the international strength of Nestle, together they become invincible.”

Trader Joe’s is often seen as a progressive company, and recently announced a project to help “fight hunger throughout New England.”

Perhaps at some point Trader Joe’s will be equally concerned about children in Palestine, where humanitarian agencies have found that due to Israel’s blockade of Gaza, “ten percent of children under 5 have stunted growth due to prolonged exposure to malnutrition. Anemia, caused by an iron-deficiency, affects 58.6 percent of schoolchildren, 68.1 percent of children nine to 12 months old and 36.8 percent of pregnant mothers.”

The situation in Gaza

Humanitarian agencies have been issuing warnings about the humanitarian devastation caused by Israel’s blockade of Gaza for many years (and analysts have described Israeli oppression of Gazans for an even longer period). In 2007 Christian Aid and 40 other humanitarian agencies called for an end to the blockade, which they characterized as “collective punishment.”

Five years ago, the U.N. warned that Gaza is expected to be unlivable by 2020. A new report says conditions are deteriorating there even faster than it forecast.

A recent investigation into the situation in Gaza reports:

•  Chronic malnutrition during formative years “can lead to irreversible consequences and side effects that will affect the body’s physiological systems, including the immune system, as well as cognitive achievements and physical development.” A physician notes:”These children will be a double burden, on their families and on society, requiring a lifetime of medical interventions for associated complications throughout life.”

Alison Weir is executive director of If Americans Knew, president of the Council for the National Interest, and author of Against Our Better Judgment: The Hidden History of How the U.S. Was Used to Create Israel. Her upcoming book talks are listed here.