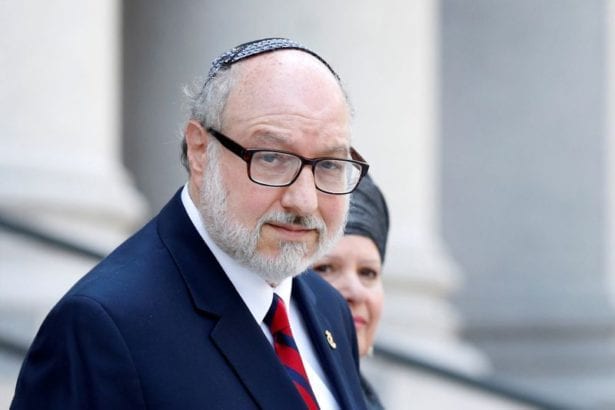 Pollard was working as a civilian intelligence analyst for the U.S. Navy, when Israel recruited him as a spy. He sold Israel a volume of classified documents measuring 10′ by 6′ by 6 ‘ – thousands of pages that included secret information on the location of American ships and training exercises.

The US prosecutor who handled the case said that the damage Pollard did to U.S. security was “beyond calculation.” Yet, many Israel partisans in the U.S. advocated for Pollard, suggesting that their loyalty to Israel was greater than to America…

Jonathan Pollard, a former U.S. Navy analyst convicted of spying for Israel in the 1980s, had his parole ended on November 20. Pollard, who served 30 years in prison before being released in 2015, became a hero in Israel. The Israeli government, ironically the largest recipient of U.S. foreign aid in history, granted him citizenship in 1995. Israeli Prime Minister Netanyahu regularly asked Presidents George W. bush, Bill Clinton and Barack Obama to release Pollard and allow him to move to Israel. Until now, no administration was willing to do so.

Pollard was arrested in 1985 and accused of passing secret documents to the Israeli intelligence service, including satellite photos of the Palestine Liberation Organization’s headquarters in Tunis, which Israel later used to guide airstrikes on the Tunisian capital. He pleaded guilty in 1987 and was sentenced to life in prison.

The scope of his espionage was so extensive that in the 1990s, then-CIA Director George Tenet threatened to resign if President Clinton released him. It is instructive to review the scope of Pollard’s espionage, the funds he received from the Israeli government to spy upon its major benefactor, and the support Pollard has received from many American friends of Israel.

Pollard was working as a civilian intelligence analyst for the U.S. Navy when he was recruited by the Israeli Defense Ministry in the mid-1980s. He delivered suitcases full of military intelligence to Israel, including satellite photos and information on Arab military systems.

Pollard claimed that the information was vital for Israel’s defense and was being withheld by Washington. Prosecutors, however, maintained that much of the information had nothing to do with vital Israeli security interests and might have fallen into the hands of hostile nations. They also said that Pollard was not motivated entirely by pro-Israel sentiments , since he admitted accepting $50,000 in cash from Israel at one point. Justice Department officials also contend that Pollard did not cooperate with the investigation, as many of his supporters claim.

So damaging to U.S. security was Pollard’s role that then-defense Secretary Caspar Weinberger told Israeli Ambassador Meir Rosenne in 1987 that Pollard should have been executed. Joseph DiGenova, the prosecutor who handled the Pollard case, said that the damage he did to U.S. security was “beyond calculation.”

Assistant U.S. Attorney Charles Leeper declared, “The defendant has admitted that he sold Israel a volume of classified documents 10 feet by 6 feet by 6feet.” He said that Pollard provided Israel with thousands of pages, including secret information on the location of American ships and training exercises.

The U.S. Government, at the time of Pollard’s trial, said that the damage resulting from Pollard’s spying exceeded that caused by Ronald T. Pelton, a former National Security Agency employee, who was convicted in 1986 of selling classified electronics surveillance secrets to the Soviet Union.

“pelton compromised specific intelligence gathering methods in a specific area, and damaged the U.S. position relative to the Soviet Union,” the prosecutors said. But they added, “Pollard compromised a breadth and volume of classified information as great as in any reported espionage case and adversely affected U.S. interests vis-a-vis numerous countries, including, potentially, the Soviet Union.”

Several U.S. intelligence analysts believe that documents stolen by Pollard were handed over to Moscow by Soviet moles within the Israeli intelligence services.

Despite all of this, the pro-Pollard movement became increasingly vocal. In 1993, a campaign to persuade President Clinton to commute Pollard’s sentence was launched. In a full page advertisement a wide range of Jewish leaders urged President Clinton
“to demonstrate your commitment to justice by commuting Jonathan Pollard’s sentence to the time he has already served.” Among those signing this statement were Rabbi Norman Lamm, president of Yeshiva University, Rabbi Arthur Green, president of tge Reconstructionist Rabbinical College, and Rabbi Gerald Zeller, president of the Rabbinical Assembly.

Many rabbinical organizations joined in urging a commutation of the Pollard sentence, including the Rabbinical Council of America and the New York and Chicago Boards of Rabbis. Seymour Reich, past chairman of the Conference of Presidents of Major American Jewish organizations, said, “I urge the President to commute the sentence of Jonathan Pollard.” The American Jewish Committee asked the President to review the case and the board of the Jewish Community Relations Council voted to approve a letter asking for clemency.

Some of Pollard’s most vocal supporters even charge that his incarceration is somehow based on religious prejudice. Thus, Rabbi Avi Weiss of of the Hebrew Institute of Riverdale, New York wrote in the Los Angeles Times that Pollard “remains incarcerated because of the improprieties, prejudice, downright anti-Israelism and elements of anti-Semitism…now he has become a political prisoner.”

While major Jewish groups in the U.S. urged Pollard’s early release, many prominent Jewish Americans sharply disagreed. One of these was Michael Ledeen, who was a consultant to the national security adviser to the President, to the undersecretary for political affairs at the State Department and to the Secretary of Defense from 1982 to 1986. He stated that, “American Jews who are mounting an impassioned campaign on behalf of Jonathan Pollard are making a mistake—-a big mistake. The man deserves everything he got, and more, both for the despicable acts he committed and for the damage he did to the American Jewish community.”

Ledeen argues that, “His oath didn’t give him the right to decide when or to whom he could divulge our secrets. Moreover, while there is no doubt that Israel ‘ran’ Pollard, he could not have been certain that his controllers were actually who they claimed to be. If the KGB had set out to recruit an agent like Pollard, they would most likely have pretended to be officials of the Mossad.”

Despite the rhetoric of Pollard’s defenders, he was never a “political prisoner.” He was a convicted spy and there was never any evidence available , or offered by his supporters, that he was innocent. David Geneson, a federal prosecutor and one of the team who handled the Pollard case as an assistant U.S. attorney, states that, “Not only did Pollard solicit his monthly pay and enjoy two luxurious European trips (unrelated to his espionage activities) at the expense of his Israeli controllers , he demanded a raise from his most senior control officer while the man lay in a hospital recuperating from surgery.

Jonathan Pollard was clearly in it for the money. But his motivation seems to have been more complicated. He grew up in a religious Jewish family deeply committed to Zionism, to the idea, as Prime Minister Netanyahu of Israel frequently proclaims, that Israel is the “homeland” of all Jews. Jonathan Pollard clearly was confused about where his loyalties properly belonged. The vast majority of American Jews believe that Judaism is a religion of universal values and that religion and nationality are separate and distinct. They understand very clearly that their “homeland” is the United States and Judaism is their religion, just as other Americans are Catholic, Protestant or Muslim.

Sadly, Jonathan Pollard may be viewed as a victim of this Zionist worldview and of Israel’s claim to speak for millions of men and women who are citizens of other countries. He has paid a high price for his crime and is now in poor health, as his wife. He can certainly be viewed as a tragic figure. If he decides to move to Israel, that country should not view him as a hero, which many Israelis may do. If Israel views itself as a friend of our country, which it repeatedly proclaims, it should ask itself whether employing a spy such as Jonathan Pollard is the way friends should treat one another.

Allan C. Brownfeld is a nationally syndicated columnist and is editor of ISSUES, the quarterly journal of the American Council for Judaism