You Are Here: Home → Texas is the seventeenth state to pass law against Israel boycotts (BDS) 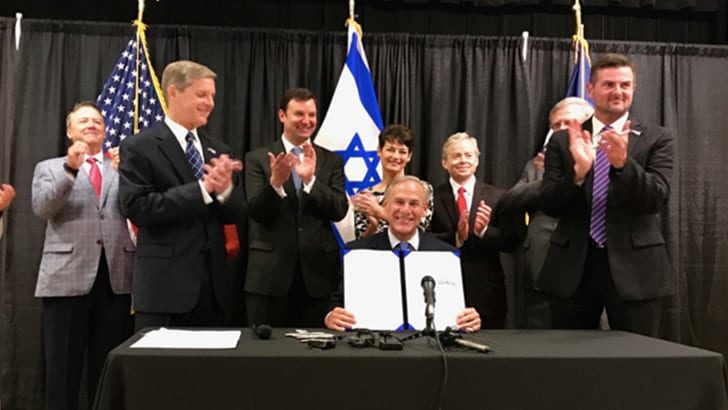 The Forward reports that Texas is the most recent state to pass a law that forbids state agencies from contracting with companies participating in the Boycott, Divestment, and Sanctions (BDS) movement.

Earlier this year, Abbott flew to Israel on the private jet of pro-Israel casino magnate and megadonor Sheldon Adelson. During his trip, the Texas governor met with Israeli Prime Minister Benjamin Netanyahu to discuss the “Texas-Israeli relationship.”

At the law’s signing, Abbot said:

As Israel’s number one trading partner in the United States, Texas is proud to reaffirm its support for the people of Israel and we will continue to build on our historic partnership. Anti-Israel policies are anti-Texas policies, and we will not tolerate such actions against an important ally.

The governor also shared that Netanyahu had told him that his son had visited Texas and reported that “Texans are just like us.” Abbott agreed, saying that after his trip, he and his wife remarked that “people in Israel are just like Texans.”

The BDS movement aims to pressure Israel to end its half-century long illegal occupation of Palestinian territory through a series of nonviolent economic actions. Similar tactics were used to end South Africa’s apartheid system, and the movement has been endorsed by the late Nelson Mandela and Archbishop Desmond Tutu.

But as BDS continued to gain support from American universities, churches, and businesses, powerful pro-Israel individuals intent on preserving the status quo have turned to the legal system to block the movement’s momentum.

LA Times: Boycotts of Israel are a protected form of free speech by the Times Editorial Board

The Intercept: Greatest Threat to Free Speech in the West: Criminalizing Activism Against Israeli Occupation by Glenn Greenwald