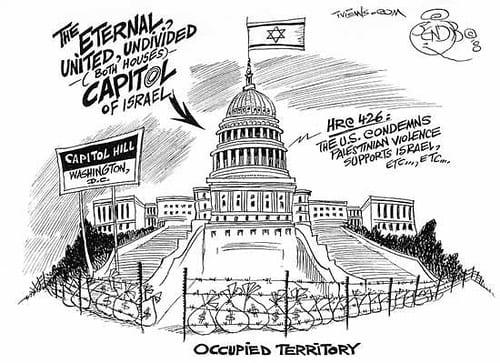 “Through words and actions, we urge you to ensure that Israel is treated neither better nor worse than any other U.N. member in good standing,” the letter said.

The letter, which will be released publicly Friday, was obtained by The Washington Post.

“As both the U.N.’s principal founding member and its largest contributor, the United States should insist on reform,” the letter read. “We are deeply committed to international leadership and to advancing respect for human rights. But continued targeting of Israel by the U.N. Human Rights Council and other U.N. entities is unacceptable.”

The senators asked Guterres, who assumed leadership of the world body in January, to seek such institutional changes as the removal of a standing agenda item for U.N. High Commissioner for Refugees sessions that has been used as a forum to denounce Israel. The senators also want a change to the rules for membership on the human rights panel to broaden participation beyond what U.S. officials have said is often a narrow and self-interested group of countries.

The unusual unanimity expands on the fierce denunciation of U.N. treatment of Israel mounted by Nikki Haley, the U.S. ambassador to the United Nations, this year. The letter praises Haley for that effort, which she has said is intended to show that the United States will not “put up with” the bashing of its close ally.

The United States has long been Israel’s chief defender at the United Nations, including regularly vetoing measures at the Security Council that were critical of Israel.

In December, the lame duck Obama administration chose to abstain on such a resolution, allowing it to pass. The measure addressed Jewish home building in the occupied West Bank, and the U.S. action was a sign of President Barack Obama’s deep frustration with what he saw as Israeli action that threatened an eventual peace deal.

The Trump administration opposes the measure and has been highly critical of the previous administration’s action. It cannot be quickly reversed, however.

The Senate letter reflects what the letter’s authors, Sens. Marco Rubio (R-Fla.) and Christopher A. Coons (D-Del.), said are encouraging signs that Guterres may be willing to change some U.N. procedures that Israel and the United States say amount to discrimination.

Guterres yanked and disavowed a U.N. report last month likening Israel’s treatment of Palestinians to apartheid. His spokesman said the report had been published without Guterres’s permission.

“If you continue to build on your recent action, we stand ready to work with you to eliminate the organization’s anti-Israel bias, and to fight anti-Semitism in all its forms,” the senators wrote.

On Sunday, Guterres told a pro-Israel audience that he cannot police all anti-Israel bias at the United Nations, but he said Israel should not be singled out for special scrutiny.

“A modern form of anti-Semitism is the denial of the right of the state of Israel to exist,” the news service JTA quoted Guterres as saying at a meeting of the World Jewish Congress. “As secretary general of the United Nations, I can say that the state of Israel needs to be treated as any other state, with exactly the same rules.”

The letter comes ahead of the first meeting between President Trump and Palestinian Authority President Mahmoud Abbas, who will visit the White House next week.

“Since it is rare for all 100 senators to agree on an issue, this letter sends a powerful bipartisan message to the U.N. that its anti-Israel bias must end,” said Marshall Wittmann, spokesman for the American Israel Public Affairs Committee.