You Are Here: Home → Tell Facebook: We need to be able to discuss Zionism

Tell Facebook: We need to be able to discuss Zionism 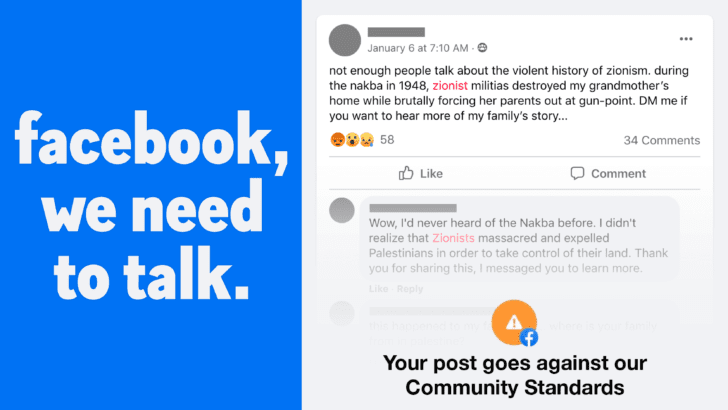 Israel is telling Facebook to add the word ‘Zionist’ to its ‘hate speech’ policy. This would censor discussion of the ideology that underlies Israeli oppression of Palestinians…

If Facebook restricts the use of “Zionist” on its platforms, Palestinians will be blocked from describing our daily lives under Israeli apartheid, as well as our families’ histories of dispossession and military occupation.

We’re working with an international coalition including Jewish Voice for Peace, 7amleh, MPower Change, Independent Jewish Voices, American Muslims for Palestine, Palestine Legal, and many more to advocate with Facebook against making this policy change.

Restricting criticism of Israel is a misguided response to a real and important problem of antisemitism. In falsely equating all Jewish people with the state of Israel, Facebook will only play into dangerous stereotypes.

Zionism claims that all people worldwide who identify themselves as Jewish belong to a “Jewish nation”, although these people are citizens of many countries, and that this “nation” has an inherent right to a supremacist “Jewish state” in Palestine, forcibly displacing the Indigenous Palestinian population and denying our basic rights.

The Zionist settler-colonial project continues to this day, through “incremental genocide” of two million in the Gaza ghetto; the ceaseless theft of our lands and forcible displacement of our communities; the endless colonial settlements; and the overarching apartheid system.

Social media platforms are powerful tools to help us share our stories, fight against all forms of racism and discrimination, and fight for our freedom.