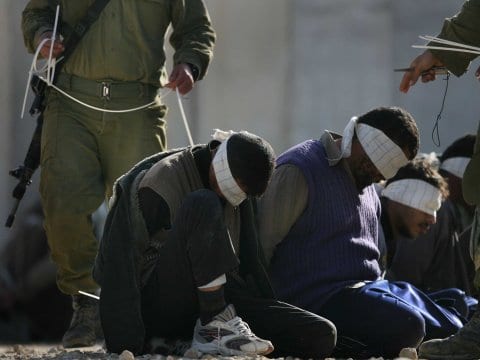 Weeks before the strike erupted, we visited the military courts in the West Bank as a part of a delegation from Stanford Law’s International Human Rights Clinic. Observing the court proceedings drove home how the prison system serves as a core pillar of the occupation — and why the prison strike has attracted so much support among Palestinians.

The prisoners are demanding better conditions: improved access to family visits and phone calls; access to books, newspapers, mail, and educational opportunities; and an end to administrative detention and solitary confinement.

Yet at the heart of their struggle lies a more insidious problem: the sprawling military court system that has stripped them of their dignity and incarcerated over one in three Palestinian men since 1967. Palestinians imprisoned in Israel are sentenced by a court system run by the Israeli military, without any of the safeguards of the Israeli civilian courts. These military courts are predicated on a legal double standard: they only prosecute crimes against Israeli citizens or property; they do not prosecute crimes committed by Israeli settlers living in the Occupied West Bank, or crimes with Palestinian victims.

As strike leader and political prisoner Marwan Barghouti has put it, Israel’s military courts are an “accomplice in the occupation’s crimes.”

Israeli authorities have cracked down swiftly on the hunger strike — not only have they punished those who have protested, but they are also reportedly looking into setting up a separate military hospital to force feed those still on strike. Far-right National Union activists, meanwhile, have organized a barbecue outside the prison, seeking to mock the hungry prisoners with the wafting scents of grilled meat. And Pizza Hut released an advertisement taunting Barghouti to end the strike with a slice of their pizza.

Israeli foreign ministry spokesman Emmanuel Nahshon has said that the Palestinian prisoners are not political prisoners, but “convicted terrorists and murderers” who were “brought to justice.”

Our observations of the military courts — and the statistics — tell a different story. The courts prosecute between five hundred and seven hundred children each year — 79 percent, between 2010 and 2015, for stone throwing, which under the Israeli military’s own classification is only a “public order” offense. This crime generally involves youth throwing stones at military targets so distant that no bodily harm occurs.

Several other offenses that the military courts process are also nonviolent in nature. Incitement — a catch-all crime that could include posting anti-occupation status on Facebook — increasingly appears on the docket. Infiltration — which involves Palestinians illegally entering Israel in order to work, usually as manual laborers — also accounts for a fair share of the men brought before military courts.

A staggering 99.74 percent of the cases heard in military court end in conviction: once accused, a Palestinian has little chance of mounting a successful defense. Evidence, especially when it pertains to children, is often the result of coerced confessions — but exclusion motions throwing out such illicitly obtained evidence are rarely successful. The court proceedings are entirely in Hebrew — a language almost all defendants, and most of their lawyers, don’t speak. Translations are often inadequate, or sloppy: we witnessed a translator walk out of the court midway through a proceeding. Most cases are resolved through guilty pleas — because, according to the attorneys we interviewed, defendants and defense lawyers alike are often punished for attempting to take cases to trial.
Palestinian prisoners, in short, are not just faced with harsh prison conditions, in prisons that their families have limited or no access to. They arrive in these facilities after facing a dehumanizing trial in a language that they do not speak, where the presumption of innocence does not apply, and where they face little chance of defending themselves successfully. When they put their bodies on the line with a hunger strike, they are doing so because the system offers them no other option.

That system must fall.

Mass incarceration is a central pillar of Israeli control over the West Bank. Improving prison conditions or adding procedural protections will not solve the problem. Only ending military control over the civilian population will deliver justice to the striking prisoners, as well as the millions suffering daily indignities on the outside.

Meghna Sridhar and Tripp Zanetis are students at Stanford Law School. Originally published in Jaobin: “The Occupation’s Accomplice: Mass incarceration is a central pillar of Israeli occupation. Hundreds of Palestinian prisoners are waging a hunger strike to fight it.”

How Would you Feel?

Dear Friends:  How would you feel if your son or daughter went on a
hunger strike demanding justice for more than a month, and nobody
bothered to call you or check on you and your beloved one?  The
silence is so loud that our hearts bleed with those mothers who are
gathering daily in various areas including  the Red Cross offices  in
the Palestinian Territories. Yet there is  no reaction or action from
the Israeli authorities or the international community to respond to
their demands for basic rights  as political prisoners,  in accordance
to the Geneva Convention.  So many of those political prisoners have
been  under administrative detention without any charge or trial.

In fact the only action taken was to move most of those prisoners to
prisons near hospitals so that they can be hospitalised if need be or
force-fed without any intention of starting a dialogue with them.
How long  will Israel continue to  ignore the basic  demands of those
prisoners, and continue to  get away with treating  them with contempt
void of any human dignity.   Do they need to die before anybody cries
out Enough is Enough.

The focus this week has been  on the visit of Mr. Trump to the region.
And Israel claimed a couple of days ago that it is introducing  easier
measures for the Palestinians.  Is this a gimmick? Or is the
occupation authority trying to pull wool over the eyes of the
American administration and the international community? How about
introducing easier measures for those prisoners, and starting a
dialogue with them?  Please we appeal to you our friends to raise your
voice before it is too late to save the lives of those young men and
women incarcerated for no other reason than for  their legitimate
right to resist an illegal occupation.

Samia Khoury is a founding member of the board of Trustees of Birzeit University and Sabeel Ecumenical Liberation Theology Centre, and author of “Reflections from Palestine: A Journey of Hope”