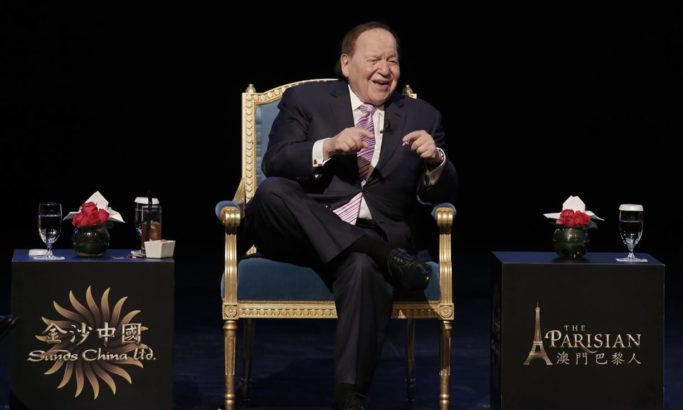 Sheldon Adelson has spent millions on backing Israel and attacking supporters of Palestinian rights in the US. (Photograph: Kin Cheung/AP)

The Las Vegas billionaire gave Republicans $82m for the 2016 elections and his views, notably staunch support for Netanyahu’s Israel, are now the official US line

by Chris McGreal, The Guardian

In 2015, the billionaire casino owner and Republican party funder Sheldon Adelson spent days in a Las Vegas courtroom watching his reputation torn apart and wondering if his gambling empire was facing ruin.

An official from Nevada’s gaming control board sat at the back of the court listening to mounting evidence that Adelson bribed Chinese officials and worked with organised crime at his casinos in Macau – allegations that could have seen the magnate’s Las Vegas casinos stripped of their licenses.

The case, a civil suit by a former manager of the Macau gaming operations who said he was fired for curbing corrupt practices, was another blow in a bad run for Adelson.

He had thrown $150m into a futile effort to unseat the “socialist” and “anti-Israel” Barack Obama in the 2012 election. His credibility as a political player was not enhanced by his backing of Newt Gingrich for president.
But three years on from the court case, Adelson’s influence has never been greater.

The imprint of the 84-year-old’s political passions is seen in an array of Donald Trump’s more controversial decisions, including violating the Iran nuclear deal, moving the American embassy in Israel to Jerusalem, and appointing the ultra-hawkish John Bolton as national security adviser.

“Adelson’s established himself as an influential figure in American politics with the amount of money that he has contributed,” said Logan Bayroff of the liberal pro-Israel group, J Street. “There’s no doubt that he has very strong, very far-right dangerous positions and that – at very least – those positions are really being heard and thought about at the highest levels of government.”

As the 2015 court hearing unfolded, the billionaire swallowed his considerable pride and paid millions of dollars to settle the lawsuit, heading off the danger of the graft allegations being tested at a full trial.

The casinos stayed in business and continued to contribute to a vast wealth that made Adelson the 14th richest person in America last year with a net worth of $35bn, according to Forbes.

Adelson has put some of that money toward pushing an array of political interests ranging from protecting his business from online gambling to opposition to marijuana legalisation.

But nothing aligns more closely with his world view than the intertwining of the Republican party and Israel.

Adelson’s considerable support for Republicans is in no small part motivated by what he regards as their more reliable support for the policies of Benjamin Netanyahu, which appear intent on preventing the creation of an independent Palestinian state.

Adelson gave $82m toward Trump’s and other Republican campaigns during the 2016 election cycle – more than three times the next largest individual donor, according to Open Secrets.

That commitment bought him an attentive hearing from the new administration as he pushed for the appointment of Bolton as national security adviser knowing that he would be an important ally in getting the White House to kill the Iran nuclear deal. The New York Times reported that Adelson is a member of a “shadow National Security Council” advising Bolton.

The day after Trump announced that the US was pulling out of the Iran agreement, Adelson was reported to have held a private meeting at the White House with the president, Bolton and Vice-President Mike Pence. 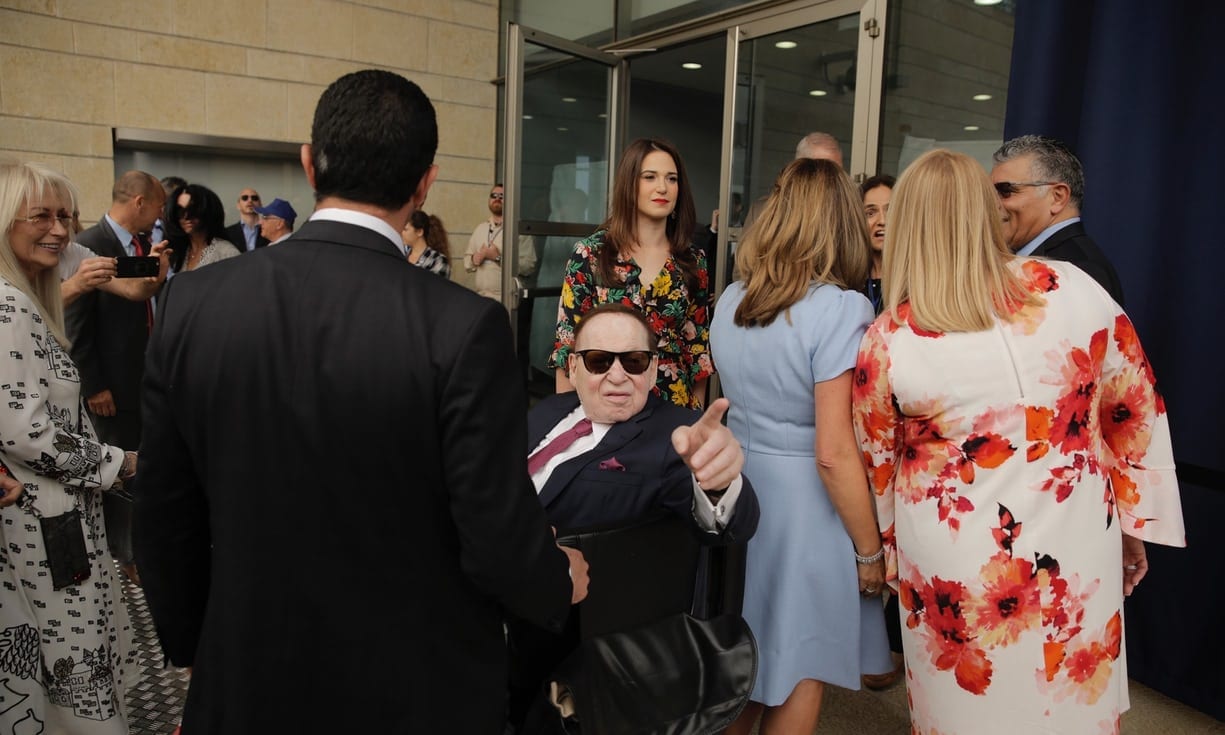 The casino magnate also pushed hard to see the US embassy moved from Tel Aviv to Jerusalem – an action previous presidents had shied away from because of the diplomatic ramifications.

Adelson was so enthusiastic about the move that he offered to pay for some of the costs and provided a jet to fly Guatemala’s official delegation to Israel for the ceremony. (The Central American country has also announced plans to follow Trump and move its own embassy.)

Daniel Levy, a former member of Israeli negotiating teams with the Palestinians and policy adviser to the then Israeli prime minister, Ehud Barak, said that Adelson’s money had helped resurface neoconservative policies which had been discredited after the US invasion of Iraq.

“Adelson is a linchpin in bringing together the radical extremists on the Israeli right and this group of hardliners on Israel and neoconservatives,” said Levy, who is now president of the US-based Middle East Project.

The billionaire is also deeply committed to protecting Israel within the US.
He paid for a new headquarters for the most powerful pro-Israel lobby group in Washington (the American Israel Public Affairs Committee), spent $100m to fund “birthright” trips for young Jewish Americans to Israel, and funds a group opposing criticism of the Jewish state at US universities.

The Israeli newspaper Haaretz recently revealed that Adelson funded an investigation by an Israeli firm with ties to the country’s police and military into the American activist Linda Sarsour, a co-chair of the Women’s March movement who campaigns for Palestinian rights and supports a boycott of the Jewish state.

Adelson also funds Rabbi Shmuley Boteach and his World Values Network which published a full-page personal attack in the New York Times on the actor Natalie Portman for refusing an award from Israel because of its government’s policies.
For his part, the casino magnate does not take criticism well.

In 2015 he secretly bought the Las Vegas newspaper, the Review-Journal, which had led the way in critical coverage of the billionaire’s business dealings. Several reporters subsequently left the paper complaining of editorial interference and curbs on reporting of the gambling industry.

Right now, Adelson is concentrated on ensuring the Republicans remain in control of Congress, and is pouring $30m into funding the GOP’s midterm elections campaign.

Adelson is no less active in Israel where he owns the country’s largest newspaper, a publication so closely linked with Netanyahu’s administration it has been dubbed the “Bibipaper” after the prime minister’s nickname.

Personal relations with Netanyahu have soured but Adelson remains committed to the prime minister’s broader “Greater Israel” political agenda and to strengthening ties between the Republicans’ evangelical base and Israel.

It’s not always a welcome involvement by a man who is not an Israeli citizen – not least because Adelson’s vision for the Jewish state does not represent how many of its people see their country.

In 2014, he told a conference during a discussion about the implications for democracy of perpetual occupation or annexation of parts of the West Bank without giving Palestinians the right to vote in Israeli elections: “Israel isn’t going to be a democratic state. So what?”