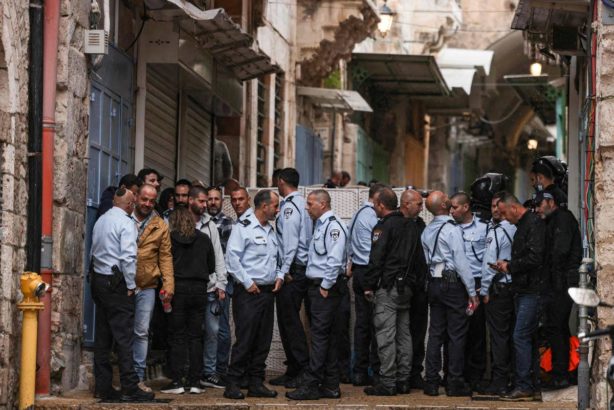 Israeli police in Old Jerusalem after the killing of Fadi Abu Shkhaydam.

A Palestinian man was killed by Israeli police after he allegedly shot and killed an Israeli. The Palestinian’s town was then invaded, his home was ransacked, his wife and daughter were arrested and his 8-year-old son was interrogated…

On Sunday morning, Israeli police shot and killed a Palestinian man after he allegedly opened fire near the Al-Aqsa Mosque in the old city of Jerusalem. One Israeli was killed in the attack; three were injured.

The Palestinian was identified as Fadi Abu Shkhaydam, age 42, a resident of the Shu’fat refugee camp in occupied East Jerusalem.

The Israeli, Eliyahu David Kay, 26, was an immigrant from South Africa. He had gone to Israel in 2017 in order to volunteer in the Israeli military.

Parts of Modi’in have been designated settlements by the European Union and are not considered part of Israel. Kay had previously studied in Kiryat Gat, an Israeli city built on the ruins of the villages of Iraq Al Manshiyyeh and Al Faloujeh.

Israeli media report that the Kay family were “very active in Chabad in Johannesburg”. Kay studied at the Chabad yeshiva in Kiryat Gat, which states it is “the first yeshiva that the Rebbe established in Israel.” The Rebbe, Rabbi Menachem Mendel Schneerson, taught a supremacist version of Judaism.

Abu Shkhaydam lived in Shu’fat Refugee camp. While the camp is officially part of Jerusalem, it is cut off from most of the city by the wall Israel began building in 2003. Residents must pass through a crowded checkpoint to go to other parts of Jerusalem.

Abu Shkhaydam was a father of five and teacher of religious studies. He was a regular preacher in Al-Aqsa and other mosques in the area, and frequently led unarmed protests against Jewish Israelis who entered the Mosque compound, an action that violates agreements between Palestinians and Israelis.

Israeli extremists have been a regular presence (example) on the Temple Mount for years, in spite of official protocol barring large groups of Jews and Jewish prayer. Israeli police accompany the trespassers and harass, expel, or even arrest Palestinian worshipers.

Some of the more radical Israeli political and religious leaders have openly called for the Al-Aqsa Mosque to be destroyed.

According to one Israeli newspaper, those who knew Fadi Abu Shkhaydam were “not surprised” to hear that he carried out the attack, given his deep connection to the Al-Aqsa Mosque.

In an open letter dated the day before his death, he expressed indignation over Israelis’ desecration of the Mosque “every single day,” and a willingness to give his life in its defense.

According to Almayadeen Media, Abu Shkhaydam was a member of the Palestinian resistance movement Hamas. The news channel reports that a Hamas spokesperson described Sunday’s incident as response to Israel’s growing list of crimes in Jerusalem [e.g. this and this], adding that the killing of their member “will not dissuade us.”

The Palestinian resistance group, Islamic Jihad, called the incident “a natural retaliation for the increase in the terrorist practices of the Israeli settlers and the IOF soldiers, and the occupation government’s insistence on adopting a policy of aggression, demolition, and displacement against our people in Al-Quds.” The UN group keeping statistics indicates that between 2008 and 2020, 5,600 Palestinians were killed and 115,000 were injured by Israelis; during the same time period, 250 Israelis were killed and 5,600 were injured by Palestinians.

Since the killing of Fadi Abu Shkhaydam on Sunday, “hundreds” of Israeli troops descended on Shu’afat refugee camp where he had lived lived (see video below), invaded and ransacked his home, interrogated his family – including his 8-year-old son Abdullah – arrested his 20-year-old daughter Aya, and imprisoned his widow. Other relatives were also summoned for questioning; Israeli forces also invaded the school where Abu Shkhaydam worked.

When Palestinians in the refugee camp began to protest the Israeli soldiers’ rough treatment of Abu Shkhaydam’s home and family, the soldiers fired rubber-coated steel bullets, gas bombs, and concussion grenades into the crowd.

Hours after the Jerusalem incident, Israeli police arrested a Palestinian teen after he allegedly stabbed an Israeli near Tel Aviv.

Earlier this month Israelis had killed two Palestinian teens: one killed by an armed Israeli civilian on Nov. 17th as the boy allegedly tried to stab Israeli police, and a 13-year-old by Israeli forces as he took part in a nonviolent demonstration on Nov. 5th.