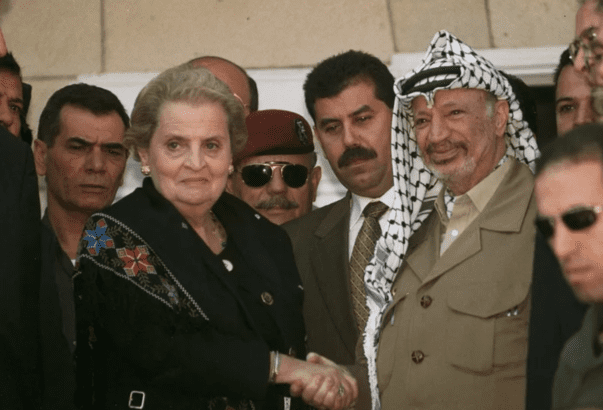 The article reposted below by James Zogby shows how Albright, notorious for her cruel remark that the deaths of Iraqi children were “worth it” (see this), could be cordial to Arab American leaders, while basically giving them nothing…

It also reveals information about the Dukakis campaign:

Zogby: My first dealings with Madeleine Albright were at the 1988 Democratic Convention in Atlanta. She wanted to meet with me to see if she could dissuade me from introducing a pro-Palestinian plank into that year’s Democratic party platform. I was representing the presidential campaign of Rev. Jesse Jackson, while she represented the Democratic nominee, Michael Dukakis… The Dukakis campaign did not want the “P-word” in the platform or even to have the matter discussed in a public forum

In the late 1980s, for the first time, Albright noticed that her State Department “peace team” was almost all Jewish…

I was deeply saddened on learning of the passing of former US Secretary of State Madeleine Albright. As I had known her for more than three decades, as an adversary and a friend, I tweeted this about her:

“Madeleine was smart, tough, & also very kind. We disagreed on Palestine a number of times, but she disagreed respectfully. I’ll never forget at the Israeli-Palestinian peace signing, she hugged me & said ‘This isn’t just a day for them. It’s for us too.’”

The response to my tweet was immediate and hostile. I received mean-spirited lectures on her insensitivity to the starving children of Iraq and her neglect of Palestinian human rights. Initially, I made the mistake of attempting to correct the record on Twitter. Because Twitter can be a cruel and unthinking place, where people are more intent on scoring points than finding understanding, I soon realized that it was pointless to continue. I thought it best to write, for the record, about a few of my encounters with Secretary Albright.

My first dealings with Madeleine Albright were at the 1988 Democratic Convention in Atlanta, Georgia. She wanted to meet with me to see if she could dissuade me from introducing a pro-Palestinian plank into that year’s Democratic party platform. I was representing the presidential campaign of Rev. Jesse Jackson, while she represented the Democratic nominee, Michael Dukakis. The nominee’s team had written rather stale platform language about the Israeli-Palestinian conflict that spoke only about support for Israel and some vague language endorsing the Camp David Accords. Palestinians weren’t mentioned at all.

Because Jackson had won enough delegates during that year’s primary contests, we had earned the right to introduce and debate a minority plank. The language we sought to include in the platform called for “mutual recognition and self-determination for both Israelis and Palestinians.” Madeleine’s job at our meeting was to convince me to withdraw our plank.

We argued. At one point, I tested her with a lukewarm compromise. I noted that since the platform called for endorsing Camp David, why not just spell that out, adding language from the Accords, i.e., “the principle of land for peace and recognizing the legitimate rights of the Palestinian people.”  That, I was told, rather forcefully, was a non-starter. The Dukakis campaign did not want the “P-word” in the platform or even to have the matter discussed in a public forum.

Realizing that no compromise was possible, we decided to take our plank to the full convention and have the first ever debate on Palestinian rights at a national party convention.

In 1995, at the second White House Israeli-Palestinian signing ceremony, as PLO Chair Yasser Arafat and Israeli Prime Minister Yitzhak Rabin shook hands, I spotted Madeleine. She hugged me saying, “This isn’t just a day for them. It’s for us too.” It was a gracious gesture in a city not known for them. And it meant a lot to me coming from someone who had been such a fierce adversary.

During her tenure as Secretary of State, we interacted on a number of occasions. She regularly briefed Arab Americans on developments and setbacks in the search for peace. She was responsive to our concerns with settlement expansion and was personally outraged by the treatment Israeli authorities meted out to Arab Americans, especially those of Palestinian descent, as they attempted to fly into Ben Gurion Airport. She personally raised the issue with her Israeli counterparts and expressed her frustration and even anger that the practice continued.

In the late 1990s my son, who had been running a human rights project for lawyers in occupied Palestine, was asked to come to Washington to work at the State Department in Near East Affairs. A few pro-Israel groups took umbrage and sought to have him removed from the post. Albright let it be known that she was enraged and said, “We can’t let them win this. It will be devastating if they do.” She defended my son and insisted that the Department needed more Arab Americans, not fewer.

While this was going on, she called me one day to tell me that she wanted to convene a meeting at the Department for Arab Americans and American Jews to update them on the problems in the “peace process.”  At the end of that meeting, she signaled that she wanted me to come back to her office for a private chat.

She told me that as she looked around the room at the 10 Arab Americans and 10 American Jews, she also, for the first time, noticed that her State Department “peace team” was almost all Jewish. [Editor’s note: Albright was also Jewish.] She asked me why I had never raised concern about this imbalance, especially after the treatment meted out to my son. I told her that while pro-Israel groups might do this, it was not something Arab Americans could or would do.

In 2006, Albright published “The Mighty and the Almighty,” a treatment of the role of religion in foreign policy. She called and asked me to interview her and moderate the discussion at her book launch and to accompany her and do the same at another book event in Michigan. What impressed me most about the book and the discussions that the audience and I had with her was the way she addressed her oft-quoted comments that appeared to dismiss the impact that the US sanctions on Iraq had on the children of that country.

She apologized for the comments — they were off-hand and flippant — and the policy, which while intended to contain Saddam Hussain, had instead taken too grave a toll on innocent civilians. She noted that the comments and policy had long haunted her.

And so, I remember Madeleine Albright, not for a quote and policy she regretted or for the fierce policy disagreements we had, but for the smart, tough, and thoughtful woman she could be and for her ability to acknowledge errors she had made and be gracious with former sparring partners. That’s the person I’ll remember.

James Zogby co-founded the Arab American Institute, a Washington, D.C.-based organization which serves as the political and policy research arm of the Arab American community, in 1985 and continues to serve as its president. He is Director of Zogby Research Services, a firm that has conducted groundbreaking surveys across the Middle East.