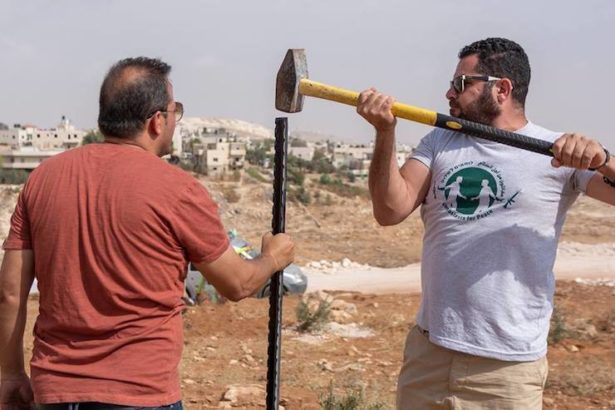 Osama Iliwat was supposed to speak at synagogues, churches, and universities across the US about the power of nonviolence and bringing an end to the Israeli-Palestinian conflict. He had a visa and had visited the U.S. before. But he was denied entry and sent back to Palestine without explanation.

by Edo Konrad, reposted from +972mag

A Palestinian peace activist was denied entry to the United States last week after being extensively questioned by American border authorities about his political affiliations and about the funders and leadership of the group for which he works. Iliwat was supposed to join a Jewish-American member of the organization for a speaking tour in synagogues, churches, and university campuses across the United States.

Osama Iliwat, a 42-year-old from Jericho, in the West Bank, had a valid visa for the United States and had been admitted into the country on numerous occasions before last week.

Iliwat, a former Palestinian Authority police officer who grew disillusioned with the violence of the Second Intifada, joined Combatants for Peace in 2014 as its Jericho-Jerusalem coordinator. Today, he serves as one of the organization’s public speakers, delivering talks to Israelis, Palestinians, and international audiences on nonviolence as a path toward reconciliation. He has never been convicted of a crime and Israel even gave him a general entry permit that allows him to cross into the country whenever he wants.

During his interrogation at New York’s JFK airport, Iliwat was repeatedly asked about Combatants for Peace and about his political affiliations. In a telephone interview with +972 upon returning to the West Bank, Iliwat said that interrogators focused most of their questions on the organization’s activities, asking for information about the its founders, their political beliefs and affiliations, how often Iliwat speaks to them, and whether they have spent time in Israeli prison. Iliwat said the interrogators also asked him about the West Bank tours Combatants for Peace organizes, and which Palestinian political movement he supports.

Combatants for Peace was formed in 2006 as an organization founded by both former Israeli soldiers and Palestinian armed fighters committed to nonviolent action against the “Israeli occupation and all forms of violence.” The group leads tours of the West Bank, supports various communities in the West Bank who face violence from settlers and the Israeli army, and has put on an alternative memorial day event for the past 11 years. While the former Israeli soldiers in Combatants for Peace served in an army that receives support from the U.S. government, Palestinian combatants are often seen as former terrorists by both Israel and the United States.

After 12 hours of interrogation, during which his phone was taken away multiple times, the agents asked him to sign a statement confirming the answers he had given them, and that he understood he was being denied entry to the country. Nobody ever told him why, he said.

The border agents then put a red stamp in his passport, annulling his three-year visa to the U.S., and brought him in handcuffs to the plane which took him back to Doha.

Iliwat said that while the Israeli members of Combatants for Peace have no problem entering the country for speaking tours, Palestinian members of the organization have repeatedly encountered issues. One member was turned back at Ataturk Airport in Istanbul on her way to New York after American officials claimed she did not have the proper paperwork to enter the country. Bassam Arameen, one of the co-founders of Combatants for Peace, who had traveled to the United States multiple times in the past, had his visa application rejected. The same thing happened to both Ahmad Hilu and Nour Shehadeh, two Palestinian members who were invited to participate in a speaking tour in the U.S.

The executive director of American Friends of Combatants for Peace, Beth Schuman, with whom Iliwat was supposed to tour, told +972 that the organization was deeply disappointed he was not able to join. The decision to bar him entry highlights the reality that some voices are welcome in the country while others are not, she added. “We have brought Osama’s voice into every program — all the synagogues, churches, and universities that we were scheduled to speak in.

“I am wondering how the U.S. consulate give me a visa for three years, and I can enter the country four times, and still have my visa cancelled,” said Iliwat. “Why should I be questioned for 12 hours, kept without food for hours and handcuffed? They spent the entire day working on my case – am I really that important that they should devote an entire day to me?”

+972 Magazine reached out to the U.S. Customs and Border Protection’s spokesperson for comment. Their response will be included here if and when it is received.

Anyone who wishes an explanation about why officials are censoring Palestinian speakers can phone U.S. Customs and Border Protection at at 877-227-5511 Monday-Friday between 8:30 a.m. and 4 p.m. Eastern time

You can also contact the agency  online at https://help.cbp.gov/app/ask

Palestinian Teen Artist Denied Visas to France, UK to Attend Exhibits of Her Own Work