You Are Here: Home → Palestinian boy in Negev dies of wounds after Israeli police shot him 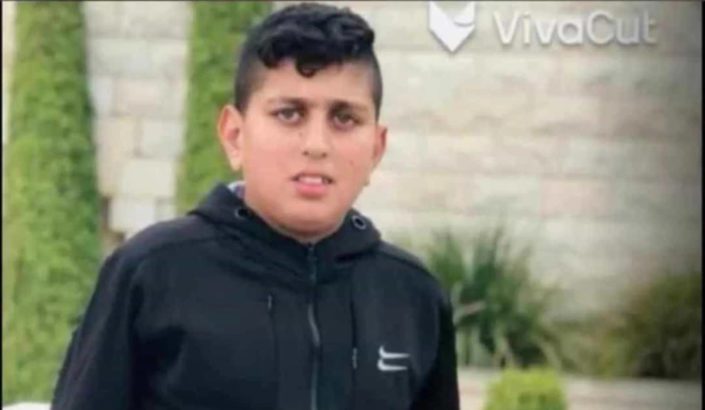 On November 1st an Israeli police officer fired at a car driven by celebrating Palestinian Israelis, and shot a boy in the neck who was walking on the side of the road. Today the child underwent an operation in Israel and died within minutes. His family has not ruled out malpractice…

On Wednesday, a Palestinian child from the Negev died during surgery at the Israeli Soroka Medical Center a month after an Israeli police officer shot him with live fire in Arara town in the Negev during celebrations after the Knesset election.

The Israeli police claimed that the officers fired at a car “driving wildly” and “believed that the life of an officer was endangered.”

Eyewitnesses said the child was walking on the sidewalk and not in the car when the officers opened fire and shot him in the neck.

The Times Of Israel said the child’s condition initially improved but had several scheduled difficult surgeries and died just minutes after the surgeons started surgery to install a feeding tube in his body.

It added that the officer who injured the child was questioned by the “Internal Investigations Department,” which is part of the “Justice Ministry” that investigates police wrongdoing in Israel, and the officer claimed he “suspected one of the drivers tried to run him over.”

Locals in the Arab town said the police had no reason to open fire and that the child had no connection with the alleged wild driver, adding that several police officers tried to stop one of the speeding cars and fired at it when the driver did not stop.

The child’s uncle, Riyad, said his slain nephew child was walking on the side of the road heading home when he was shot and seriously injured and added that Issa was recovering and even started walking while attached to a medical device, but then he suffered complications and died during surgery.

Ha’aretz reports that the family has not ruled out the possibility that medical malpractice led to his death and are waiting for the autopsy results.

Riyad stated that the investigation could reveal whether the child died of medical negligence or other causes, adding that “no matter what eventually led to his death, the police should not have opened fire, and they are responsible for his death.”

Editor’s note: Issa was a Bedouin Palestinian from Arara in the Negev. Bedouins, who mainly identify themselves as Palestinians, are frequently the target of Israeli racism and discrimination.

In 2021 United Nations human rights experts called for an end to the “violence, discrimination and incitement to racial hatred against Palestinian citizens of Israel.”