You Are Here: Home → Opinion: Birthrighters can handle the truth. Show them the occupation.

Opinion: Birthrighters can handle the truth. Show them the occupation. 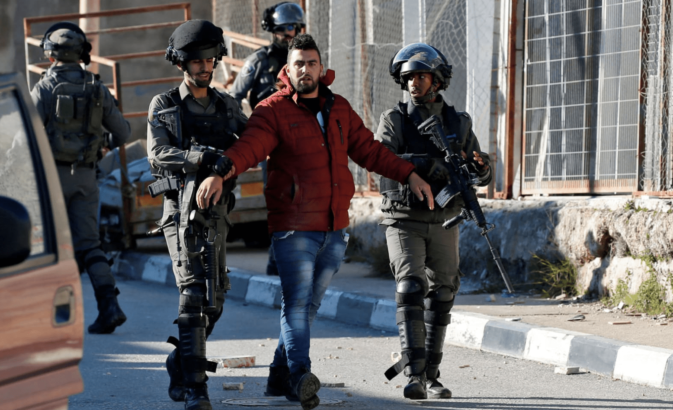 Israeli soldiers detain a Palestinian man during clashes between Palestinian demonstrators and Israeli troops in Ramallah, near the Jewish settlement of Beit El, in the occupied West Bank, Dec. 2018. Credit: AFP

A former Birthright trip coordinator and leader’s bold opinion: young Jews on Birthright trips are aware of world events, and shouldn’t have to feel like they’re engaging with a sanitized and whitewashed version of Israel. When tour organizers don’t show them realities like the occupation, they are painting an incomplete and dishonest picture of what’s happening on the ground. Showing and telling the truth will make birthrighters more likely to engage and take action.

I have been a Birthright participant and trip leader and an on-campus Israel advocacy professional, and I’ll never forget the first time I visited the West Bank.

I was standing in a Palestinian village in Area C under a half-completed minaret, its rusted and twisted metal shooting up into the sky, as the head of the village council described how the village had applied for building permits from the Israeli civil administration to finish construction of their mosque and other facilities, including a school. He told us each time they’ve applied for a permit, they’ve been denied, no explanation given.

I looked out across the hill at an Israeli settlement. I saw neat rows of red-roofed houses and heard the gleeful whooping of children beating the summer heat next to a swimming pool.

With all my time spent in Israel, I’d never heard from Palestinians like this village elder speaking first-hand about their lives under occupation. The web of checkpoints, walls, and roads Palestinians are forced to navigate, in a military regime they didn’t choose to live under, had been invisible to me.

Why, in all my previous Israel trips, had no one mentioned this reality?

It felt like a fissure in my relationship to Israel. And I’m not alone – Birthright enrollment this year has declined by as much as 50%. There’s a lot for Israel trip organizers and educators to learn about how they make participants feel when they decide what to highlight and what to hide.

My experience as a Birthright participant pushed me to become an enthusiastic advocate for Israel. I led trips to Israel and trained thousands of young people, from high school all the way through college as an on-campus Israel professional. For several years, I rarely questioned what I had learned.

But it was my students who showed me the limits of my Israel education. They started asking questions I couldn’t answer: Who controls the lives of Palestinians in the West Bank? What are the settlements? Why do they keep growing? If Israel is just protecting itself, why are so many more Gazans killed in every war than Israeli soldiers?

They had seen things online and talked to their friends on campus. My hasbara toolbox didn’t contain authentic answers.

I’m sure some trip organizers fear that showing anything but Israel’s most relatable, positive aspects will cause participants to feel alienated and disengaged. But meeting Palestinians and learning about the occupation didn’t make me want to walk away. It made me want to dive in. I felt called to learn more deeply and critically about Israel, and later, to take action alongside Israelis and Palestinians against the occupation.

This summer, I led a group of young Jews from the U.S., Canada, U.K., and Australia visiting Israel for a New Israel Fund program called the Naomi Chazan Global Activism Fellowship, to meet with Israeli and Palestinian activists and see the kinds of complex realities I have come to understand, and which most organized trips avoid or even hide.

We visited Hebron on a Breaking the Silence tour and met Palestinian communities in Area C of the West Bank; traveled through East Jerusalem to learn about the 350,000 Palestinians who call the divided city home; visited an unrecognized Bedouin village in the Negev; met with Mizrachi activists in Yeruham and South Tel Aviv fighting racism against their community, and more.

Many of our trip participants, who had visited many times previously, told me they felt like they were engaging honestly and completely with Israel for the first time.

When, for example, we visited an unrecognized Bedouin village in the Negev, one participant relayed her shock to me as the village sheikh described over tea how the village remains unconnected to water, electricity, and other basic services, even though its residents are Israeli citizens. Just a year prior she had spent a night in a “Bedouin tent” on Birthright and been told that this was representative of the Bedouin experience.

Young Jews shouldn’t have to feel like they’re engaging with a sanitized and whitewashed version of Israel. When we don’t show them realities like the occupation, we are painting an incomplete and dishonest picture of what’s happening on the ground.

Young people are going to find out about the hard stuff – there is no way around that. And if they are lied to by educators and shielded from the reality that is coming to their doorsteps, the fissure that is created is simply too wide. It’s almost impossible to get past it.

More often than not, when they witness a less filtered Israel, young people like my trip participants – and me – find ourselves even more likely to stay engaged and take action.

That’s because any liberal or progressive young person who is socially and politically aware in their own country (in the U.S., that’s the majority of us) is asking the same questions about fairness, equal rights, and social justice in Israel that they ask at home. They’re eager to build relationships with their Israeli and Palestinian counterparts on the basis of shared values.

This is particularly meaningful right now, since many of them see parallels between the politics of racism and tribalism in America, Europe, and Israel.

While some may believe that young people don’t have the tools to understand these issues in context, and therefore should be shielded from seeing injustice on the ground, all of my experiences prove that the opposite is true.

When trips like Birthright deliberately avoid showing participants a fuller picture, including the occupation (but not only the occupation) they leave participants feeling like they’re being lied to, which is why some of them feel motivated to walk off to see the things Birthright won’t show them.

So the question becomes: will our community encourage young people to engage with these issues head-on, or are we going to continue with a model that leaves them feeling betrayed and alienated?

I have seen the difference firsthand. When we give young people the space to see and grapple with the occupation and meet the activists and organizations working to end it, they understand that they’re dealing with Israel in its fullness, in a way that aligns with their values.

They see the incredible Israeli civil society leaders who, in the face of anti-democratic moves by their political elite, are fighting for equality, pluralism, civil and human rights. Like me, they feel called to join the struggle.

Jacob Levkowicz is a Program Officer at the New Israel Fund. He was previously an NIF/Shatil Social Justice Fellow and Dorot Fellow in Israel