You Are Here: Home → New U.S. Secretary of State Mike Pompeo Has a Hawkish History on Iran and Israel

New U.S. Secretary of State Mike Pompeo Has a Hawkish History on Iran and Israel 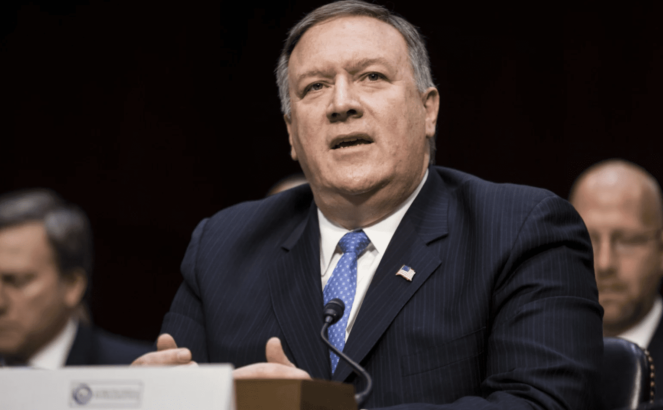 Mike Pompeo, who Trump nominated to replace Rex Tillerson as secretary of state, has a record as a strong Israel supporter and a fierce critic of the Iran nuclear deal

WASHINGTON – Mike Pompeo, U.S. President Donald Trump‘s nominee to replace Rex Tillerson as secretary of state, has a record as a strong supporter of the Israeli government and a fierce critic of the Iran nuclear deal. Pompeo spent the last 15 months as the Director of the Central Intelligence Agency, and prior to that, was a member of Congress for five years, representing the 4th Congressional District of Kansas.

Pompeo spoke last November at a gala dinner for “Our Soldiers Speak,” an organization that brings officers from the Israeli army and other Israeli security agencies to the United States. In his speech, he emphasized the Trump administration’s close cooperation with Israel and its support for Israel’s security.

Pompeo has been rumored as a leading contender to replace former Secretary of State Rex Tillerson for months, but has never publicly addressed those rumors.

Pompeo is notable for his hawkish line on Iran, both as CIA Director and, prior to that, as a Member of Congress. He has warned that the Iran nuclear deal was failing, and has compared Iran to ISIS. He has also said that nuclear cooperation between Iran and North Korea was “a real risk” to the United States. While serving in Congress, Pompeo was among the most outspoken Republican critics of President Barack Obama’s foreign policy in the Middle East.

In November 2016, shortly after Trump won the Presidential election and before it became public that Pompeo would be nominated to lead the CIA, he declared on Twitter, with regards to the Iran nuclear deal, “I look forward to rolling back this disastrous deal with the world’s largest state sponsor of terrorism.” That tweet, together with Pompeo’s entire twitter account, was deleted after he took over the CIA, in line with the agency’s policies.

During his confirmation period, Pompeo assured worried Democrats – among them Senator Feinstein – that as CIA Director, he would “objectively monitor” the nuclear deal’s implementation by Iran, despite his opposition to the deal while he was a member of Congress. This was one of the reasons that Feinstein eventually decided to vote for him, despite having reservations at the beginning of the confirmation process.

In the summer of 2015, at the height of the debate over the Iran deal, Pompeo said that the deal “won’t stop Iran from getting a nuclear bomb and places Israel at more risk.” He also said that the “theory that post-sanctions Iran will moderate is a joke – they want to annihilate Israel, now buying Russian missiles.” Pompeo also criticized the Obama administration for not demanding that Iran cease calling for Israel’s destruction as part of the deal – a demand proposed and promoted by Israeli Prime Minister Benjamin Netanyahu. “Ceasing to call for the destruction of Israel should have been a condition of the Iran Deal – along with release of innocent American hostages,” Pompeo said in a statement.

In November 2015, Pompeo visited Israel and met with Netanyahu, a meeting which he said left a strong impression on him. “Prime Minister Netanyahu is a true partner of the American people,” Pompeo said after their discussion at the Prime Minister’s Office in Jerusalem. “Our conversation was incredibly enlightening as to the true threats facing both Israel and the United States. Netanyahu’s efforts to prevent Iran from obtaining nuclear weapons are incredibly admirable and deeply appreciated.”

During the same visit, Pompeo met senior officers in the Israeli police and was briefed by them on the “lone wolves Intifada” that included dozens of stabbing and car-ramming attacks by Palestinians across the country. A statement by his office described the Israeli police officers he met as “a group of officers who not only bravely defend the people each day, but have also been targeted themselves by terrorists.” Pompeo said that “by putting on their uniform, the men and women of the Israeli National Police put a target on their back for terrorists who want to murder law enforcement. In the fight against terrorism, cooperation between Israel and the United States has never been more important.”

Two weeks after his visit, Pompeo released a statement condemning “the ongoing violence in the State of Israel,” explaining that “I can tell you that the Israeli people and the Israeli National Police are demonstrating admirable restraint in the face of unspeakably cruel attacks.” He added that “We cannot let these acts of terror go on any longer. Those who carry out, encourage, or defend this violence should be condemned in the strongest possible terms. We must stand with our ally Israel and put a stop to terrorism. Ongoing attacks by the Palestinians serve only to distance the prospect of peace.