You Are Here: Home → Neocons Enlist in Anti-Trump #Resistance 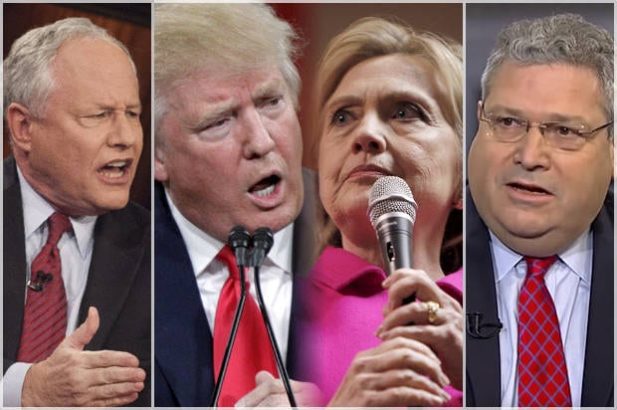 In these summer dog days of the Trump presidency, good news is hard to come by, but in late June it was reported that the successor institution to William Kristol’s [pro-Israel] Project for a New American Century, the Foreign Policy Initiative (FPI), was shutting its doors for good.

FPI was founded in 2009 to give the displaced neocons who had worked for President George W. Bush a platform from which to endlessly criticize the new Democratic administration and push for a continuation of Bush’s disastrous neocon foreign policy. (Some other neocons sheltered in place mostly inside the State Department and the Pentagon.)

During the Obama years, FPI gave a platform to Kristol and likeminded neocons such as Dan Senor, James Kirchick and Jamie Fly, who went on to serve as a foreign policy adviser to neocon favorite Sen. Marco Rubio, R-Florida.

FPI was generously subsidized by hedge fund manager Paul Singer. The Washington Post recently reported that “Those close to the organization said that in the new policy and political environment marked by the ascendency of Donald Trump, many donors, including Singer, are reassessing where to put their funds.”

But does the demise of FPI mean the neoconservatives would be, at long last, going away for a while — perhaps to take stock in the immense damage they have caused the country and the word? The answer would seem to be: not on your life. And why would they? In Donald Trump’s Washington, the neocons are in high demand even though a number of high-profile neocons (such as Elliott Abrams and John Bolton) were rebuffed for senior positions inside the new administration. But neocons are finding plenty of high-profile jobs elsewhere.

In April, the New York Times announced that longtime climate change denier Bret Stephens was joining the paper as an op-ed columnist. Stephens, who came to the Times from the Wall Street Journal, has been aptly described by The Nation’s Eric Alterman as a “deliberate purveyor of propaganda and misinformation.” Stephens’s past columns include such classics as “I Am Not Sorry the CIA Waterboarded.”

For its part, the centrist Brookings Institution announced last month that it was hiring neocon smear artist James Kirchick. Kirchick, who will serve as a Brookings Visiting Fellow, has used his platform at the Internet tabloid Daily Beast to smear proponents of detente as “Putin apologists” and “anti-semites.” Kirchick, an outspoken NeverTrumper, also penned a hysterical (and discredited) screed accusing prominent liberals, without evidence, of supporting Donald Trump.

Neocons are also in demand at what had long been one of the more responsible foreign policy think tanks in Washington. The German Marshall Fund just announced the launch of the Alliance for Securing Democracy, which, according to its mission statement, “will develop comprehensive strategies to defend against, deter, and raise the costs on Russian and other state actors’ efforts to undermine democracy and democratic institutions.”

“The Alliance,” read the statement, “will work to publicly document and expose Vladimir Putin’s ongoing efforts to subvert democracy in the United States and Europe.”

The Alliance will be run by none other than former FPI executive director Jamie Fly and a former foreign policy adviser to the Clinton campaign, Laura Rosenberger. The Alliance’s board of advisers is a veritable who’s who of neocon royalty including the ubiquitous Bill Kristol, along with David Kramer, Michael Morell and Kori Schake.

This is not to imply that the neocons find themselves confined to the think tank world and lack representation inside the Trump administration. Far from it. Trump has appointed several neocons to key jobs, such as United Nations Ambassador Nikki Haley, National Security Adviser H.R. McMaster, and the new Ukraine Envoy Kurt Volker.  It is also rumored that Trump will appoint hardliner, A. Mitchell Weiss, as assistant secretary of state for Europe and Eurasia, the post from which Victoria Nuland, a neocon holdover from the Bush years to the Obama administration, managed to do such lasting damage to U.S.-Russia relations.

The neocon revival has been facilitated by #Resistance-friendly media like MSNBC, which frequently features David Frum and Willian Kristol, two early and outspoken members of the NeverTrump movement. But perhaps what the #Resisters at MSNBC are forgetting is that the neocon-dominated NeverTrump movement was driven by the fact that, for them, Trump was not militaristic enough, which is why they threw their support behind the likes of Marco Rubio and Lindsey Graham in the Republican primaries and, in the cases of Robert Kagan and Max Boot, behind Hillary Clinton in the general election.

The willingness of the pro-Hillary #Resistance to make common cause with the neocon NeverTrumpers is troubling and may explain why there has been so precious little “resistance” on their part to Trump’s plans to expand the wars in Afghanistan, Libya, Syria and Yemen. (Indeed, Trump’s April 6 missile strike on Syria won praise from Hillary Clinton, who only lamented that Trump had not done more militarily in Syria.)

But perhaps all this isn’t so surprising, after all, the legions of embittered Clinton supporters never really objected all that strenuously (if at all) to their candidate’s record of support for endless war. [See this]

In the end, perhaps the neocons and the pro-Hillary #Resistance are not such strange bedfellows after all. Indeed, the #Resistance’s newfound enthusiasm for many prominent NeverTrumpers like Kristol and Frum helps explain the neocon revival now underway.

James W. Carden served as an adviser on Russia policy at the US State Department. Currently a contributing writer at The Nation magazine, his work has appeared in the Los Angeles Times, Quartz, The American Conservative and The National Interest.

Pro-Israel sentiment is a major motivator for neocons. For information on that aspect, please see:

“The Bush Neocons and Israel,” by Kathleen and Bill Christison, Counterpunch, December 2002;

“The Transparent Cabal: The Neoconservative Agenda, War in the Middle East, and the National Interest of Israel” by Dr. Stephen J Sniegoski;

“The Road to Iraq: The Making of a Neoconservative War” by Muhammad Idrees Ahmad;

“How Pro-Israel Neocons Pushed for War in Iraq, by Alison Weir.