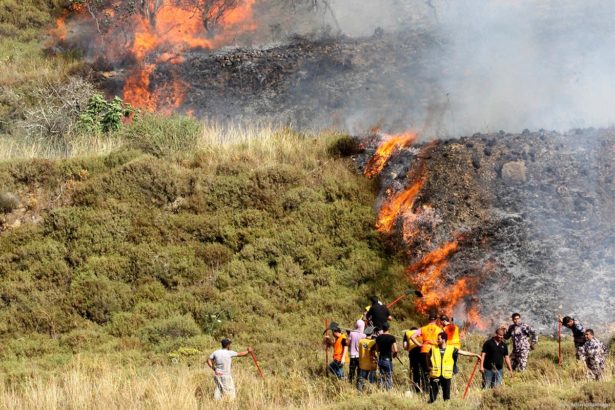 Jewish settlers burnt scores of acres of Palestinian farms on Tuesday in the neighbourhood of Aqraba to the south of Nablus in the occupied West Bank, Quds Press has reported. According to a member of the Anti-Israeli Wall Committee in Aqraba, the extremist Jews set fire to the Palestinian-owned properties in the areas of Ein Al-Dooda and Ein Al-Joheir.

Speaking to Quds Press, Yousef Deriyeh added that the settlers were likely to have come from the illegal Israeli settlement of Itmar, which is built on Palestinian land to the east of Nablus.

He noted that the fire damaged hundreds of citrus trees at a time likely to strike a serious blow to the harvest. Local farmers depend mainly on their agriculture produce for their living.

Deriyeh said that Palestinian fire fighters could not get access to the fire due to the presence of Israeli occupation forces and the extremist settlers. He noted that Israeli settlers carry out aggressive acts against the Palestinians in the area from time to time, and pointed out that they are always protected by heavily-armed Israeli troops or police, who target any Palestinians who try to stop the extremists.