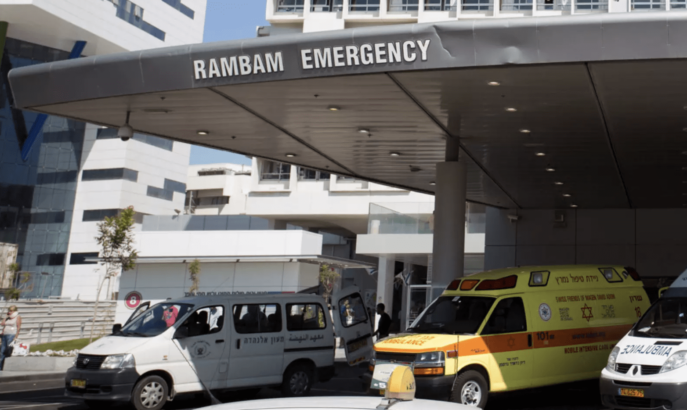 Rambam Medical Center in Haifa, where the 3 Palestinians were taken after the attack.

Israel has for years been guilty of detention, mass incarceration, targeting one group while letting another off scot-free. But since the passage of the Nation-State Law, extremists are emboldened in a new way that eerily resembles White-Privilege-MAGA-USA. (Both Israel and the US should be disgusted by the comparison.)

[The author of this piece, Noam Shuster Eliassi, who “looks Arab, “was assaulted in Tel Aviv two years ago, but released when it was discovered that she is a Mizrahi Jew. Her accent and ID card – her privilege – saved her. Recalling this moment, Ellassi discusses the new trend of right-wing Jews attacking Palestinians in Israel.]

Last weekend, three Arab citizens of Israel went to the beach near Haifa. A group of right-wing vigilantes passed by and asked them if they were Arabs. When they confirmed their identity, the gang brutally attacked them with chains, sticks, and knives. The young Jews attacking them said they were “Arab dogs” and they should not be at that beach; they should go to their “own places.”

Passerby Yair Alaluf challenged and stopped the attackers, and called the police and an ambulance; he saved the victims from a complete lynching.

The victims filed a police complaint, and the story was widely reported; Israel’s President Rivlin condemned the attack, saying: “We are all destined to live here together in this country, and are not doomed to live like this.”

Others, in the government, did not join his condemnation.

Arabs [were] attacked in a country that, thanks to the Nation-State Law, now considers them officially inferior to their Jewish fellow citizens.

We can’t be surprised that a violent fringe in Israel feels legitimized, when the government itself backs legislated racism.

Two years later, I still remember the horror of being assaulted myself. But I always knew I had the chance of finding shelter when my identity was revealed. I knew, in general, that the system was on my side and they can’t touch me.

That, despite the fact that we ourselves decided there was little point filing an official police complaint, not least because of the minimal chances of a satisfactory outcome from an investigation conducted by a police force that tends to protect its own and has a poor record of investigating police assaults on Mizrahi Jews as well.

How does it feel when you don’t have the right accent, the right ID card, if you’re not the “right” kind of citizen and you don’t have the full backing of a legal system to support you? These feelings – of abandonment, vilification, silencing and targeting for physical assault – should ring alarm bells from the darkest pages of Jewish history.

Vigilante attacks on Arabs in Israel, whether citizens or not, are hardly new, but the power of our current political leadership and its actions legitimize these incidents more and more.

Every act of  political incitement, every deliberate silence on violence against Arabs, is a threat to the safety, equality and legitimacy of millions of Israelis. For Israel’s Jewish right, “Arab” has become such a toxic characteristic it spills over into a hatred of anyone who even “looks” or “sounds” Arab.

If Israel is to have a future as a sustainable secure homeland for all its citizens, we have to hope that there are many more Alalufs out there.