You Are Here: Home → Legal facts on the Gaza electricity crisis 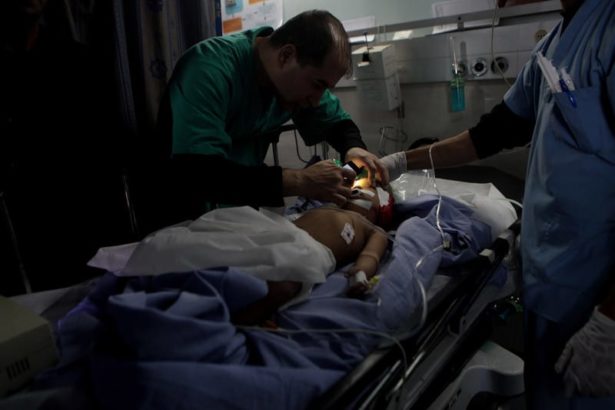 Gaza now has daily blackouts of 18-20 hours, meaning that patients who rely on life saving medical equipment are put at real risk on a daily basis, and hospitals generally cannot function at their full capacity to ensure the health and wellbeing of patients.

For the last three months, families in Gaza have been receiving around 2-4 hours of electricity per day. This crippling electricity crisis underscores the acute assessment recently made by Robert Piper, UN Coordinator for Humanitarian Aid and Development Activities, that the conditions in Gaza passed the: “[U]nlivability threshold quite a long time ago.”

The current electricity crisis is exacerbating an already desperate situation of undignified conditions for the people of Gaza who have lived under an illegal closure imposed and sustained by successive Israeli governments since June 2007.

This LPHR legal Q&A outlines the background and impact of this electricity crisis affecting the entire population of Gaza, before assessing whether or not Israel is adhering to its obligations, as an occupying power, under international humanitarian and human rights law in regard to its ongoing action causing this crisis. It will also assess whether or not the Palestinian Authority is adhering to its obligations to the people of Gaza, under international human rights law, in relation to its role causing this humanitarian emergency.

What are Gaza’s sources of electricity?

Gaza receives electricity from Israel, Egypt and from within a single power plant near Gaza City.

Around 28 megawatts (MW) of electricity are provided to Gaza from Egypt per day. However, there are frequent disruptions to the supply of electricity from Egypt due to ongoing technical malfunctions, so Gaza often receives less.

The sole power plant in Gaza produces around 60MW per day, although its ability to function depends on fuel which comes in through Israel.

Israel ordinarily provides approximately 120MW to Gaza per day. The electricity is sold to Gaza by Israel and deducted from the tax money that it collects on behalf of the Palestinian Authority. However, on 11 June 2017, Israel’s security cabinet made a decision to reduce its supply by 40% to 70MW, thereby significantly exacerbating an electricity crisis that has long impacted Palestinian residents of Gaza.

Why can’t Gaza source all of its electricity from its own power plant?

The power plant in Gaza was only ever envisaged as a means to supply Gaza City with electricity, and not the entire Gaza Strip which has a population of around 1.8 million people. It suffered damage to its fuel reservoir due to a military attack during Israel’s code-named “Operation Protective Edge” in 2014. Israel has restricted the movement of necessary parts to repair the fuel reservoir, and as such the power plant has not been operating at full capacity since 2014.

Between April and June of this year, the power plant was out of commission due to a shortage of fuel because of a dispute between the Palestinian Authority and de facto Hamas authorities in the Strip. The power plant has now resumed operations because of fuel purchased from Egypt, however it depends on the small quantities of fuel sold by Egypt at sporadic intervals, and this is not enough to meet the electricity demands of the Gaza strip.

Why did Israel decide in June 2017 to reduce the electricity it supplies to Gaza?

The decision to reduce the electricity was implemented on 19 June 2017, and the supply was reduced from 120MW to 70MW.

What impact has Israel’s decision had on the population of Gaza?

It is estimated that the demand for electricity in Gaza is around 400-500MW per day, depending in part on the time of the year. Before the decision of 11 June 2017, residents of Gaza were already receiving electricity far below that demand, at 208MW per day, which meant that they had regular blackouts lasting for around 8 hours.

The electricity reduction following the Israeli government’s decision of 11 June 2017 has worsened the ongoing difficult living conditions which residents of Gaza face on a daily basis. Without electricity, it is impossible to provide adequate standards of health, education and welfare services. Industries and business also suffer, further inhibiting a stifled economy.

Gaza now has daily blackouts of 18-20 hours, meaning that patients who rely on life saving medical equipment are put at real risk on a daily basis, and hospitals generally cannot function at their full capacity to ensure the health and wellbeing of patients. Hospital wings have been shut down entirely during blackout periods.

Water desalination facilities have been severely impacted by the lack of electricity, meaning residents of Gaza have less access to clean water. The impact on hygiene and public health on the population is severe and a matter of grave concern as sewage water cannot be treated or pumped away from residential areas. Currently, around 80% of Gaza’s shoreline is polluted by untreated sewage, enabling the spread of waterborne diseases.

It is also not possible to normally operate household appliances such as refrigerators and fans. This is extremely troubling given the sweltering summer heat that Gaza faces during the summer months between June and September. The crisis has meant that residents of Gaza have had to resort to unsafe cooking and lighting methods in order to meet their household family needs. Since 2013, 64 people have been injured, and 26 people have been killed in accidents related to the electricity crisis. 13 of those deaths have been children.

The electricity crisis has permeated every single fabric of daily life for the residents of Gaza, from the inability to work, study, store food safely in refrigerators, drink clean water, and run businesses and hospitals.

What are Israel’s obligations under International Humanitarian Law?

Israel retains “effective control” over the Gaza Strip, through its control of Gaza’s land, waters and airspace, as well as its tax policy and tax revenues. As such, Israel is an occupying power over Gaza under international law. Under the laws of occupation, Israel has responsibilities towards the occupied population as promulgated in the Fourth Geneva Convention and the Additional Protocols.

In relation to the current electricity crisis, Article 56 of the Fourth Geneva Convention holds that the Occupying Power has the duty of “ensuring and maintaining, with the cooperation of national and local authorities, the medical and hospital establishments and services, public health and hygiene in the occupied territory”.

Furthermore, Article 69 of The First Additional Protocol states that, in addition to the above duties, the Occupying Power shall ensure the provision of other supplies essential to the survival of the civilian population. The International Committee of the Red Cross has provided commentary on Article 69, explaining that the relevant duties are context specific, depending on the particulars characteristics of the occupied territory. The commentary to Article 69 also notes that “it is quite possible to suffer, or even die, from heat or cold”.

There is no requirement under these Articles that the Occupying Power receive payment for its provision of these basic supplies. It is therefore irrelevant under International Humanitarian Law that the Palestinian Authority has reduced its payments to Israel in respect of electricity supplied to Gaza. Israel is not simply a party to a transaction, where payment is the only relevant factor to consider. Israel is an Occupying Power and there are duties and responsibilities imposed upon an Occupying Power to ensure in so far as possible that the basic needs of a civilian population are met.

The electricity crisis has severely impacted the maintenance of medical establishments, public health and hygiene. It is accordingly clear that Israel’s implementation of its Security Cabinet decision of 11 June 2017 is in disturbing disregard of its international humanitarian law obligations found in Article 56 of the Fourth Geneva Convention, and Article 69 of the First Additional Protocol.

What are Israel’s and the Palestinian Authority’s obligations under International Human Rights Law?

The United Nations Convention on the Rights of the Child (CRC) was ratified by Israel in 1991. It applies to Palestinian children in the Occupied Palestinian Territory, including Gaza. Article 24 holds that State Parties must strive to ensure that no child is deprived of his or her right to access health care services. Article 27.1 imposes the responsibility on Israel to recognise “the right of every child to a standard of living adequate for the child’s physical, mental, spiritual, moral and social development”. The ‘unlivable’ standard of living which the nearly 1 million children currently living in Gaza are experiencing falls well below the standard envisaged in the CRC.

The International Court of Justice has held that the International Covenant on Economic, Social and Cultural Rights (ICESCR) applies to the actions of an occupying power. Article 11 of the ICESCR recognises the right of everyone to an “adequate standard of living…including adequate food, clothing and housing, and to the continuous improvement of living conditions”. The “de-development trajectory” of Gaza as recently described by the United Nations, and seriously exacerbated by the current electricity crisis, clearly indicates that Israel has failed to uphold its obligations in relation to Article 11 of the ICESCR.

As well as Israel’s obligations under international human rights law, the Palestinian Authority too has legal obligations towards the residents of Gaza. The CRC and ICESCR were ratified by the State of Palestine in April 2014. As such, the request made by the Palestinian Authority to reduce payments of electricity to Gaza, is in appalling contravention of its key obligations owed to the children and wider population of Gaza under Article 27 of the CRC and article 11 of the ICESCR respectively.

Does the electricity crisis amount to ‘collective punishment’?

Article 33 of the Fourth Geneva Convention prohibits the use of collective punishment by an occupying force against a civilian population. Israel should therefore refrain from imposing sanctions or penalties against an entire civilian population in respect of offences that they have not personally committed. The furtherance of the aim to deter others through the use of collective punishment is illegitimate and prohibited.

The closure of Gaza itself has long been criticised as a form of collective punishment, and in imposing even further restrictions on the lives of the civilian population, through the electricity crisis, as an additional mode of punishment or intimidation, Israel is further breaching Article 33 of the Fourth Geneva Convention.

These obligations are imposed upon Israel as an Occupying Power, and they exist notwithstanding the requests and the recommendations of the Palestinian Authority, as well as the actions of the de facto authority in Gaza, Hamas. Shortages of electricity are causing residents of Gaza extreme suffering, and there are reasonable steps that Israel can immediately take within its power and resources, and in accordance with its international humanitarian and human rights law obligations, to alleviate that suffering and ensure the basic standards of living are met. Equally, the Palestinian Authority should immediately take steps within its own powers and resources, in accordance with its own international human rights law obligations, to ensure as far as possible that the basic rights and standards of living of Gaza’s population are met, including immediately rescinding its deeply troubling request to Israel to reduce its electricity supply to Gaza.

from Lawyers for Palestinian Human Rights