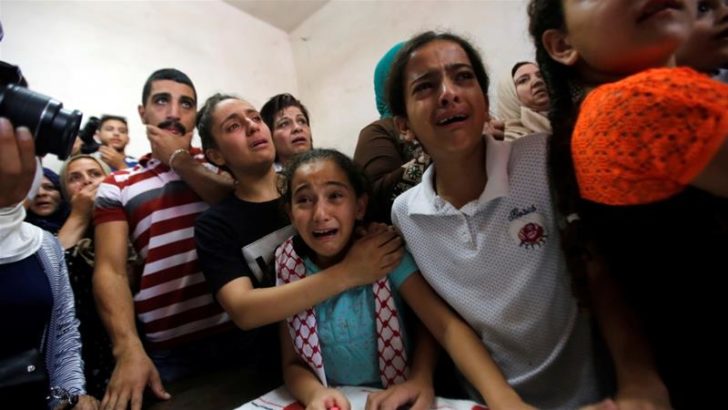 Relatives of Arkan Mizhar, a Palestinian who was killed by Israeli soldiers during a raid, mourn during his funeral.

If it feels like Palestinians are constantly dying, that’s because they are. 43 in November. 526 since Trump’s Jerusalem announcement 2 years ago – 111 of them children. Where in the world is the world?

A Palestinian statistics center documented the murder of 43 Palestinians by Israeli soldiers in November. 38 of the victims were in Gaza during the Israeli escalation against the enclave.

The study also revealed that the Israelis have killed 526 Palestinians since Trump’s announcement of occupied Jerusalem as capital of the occupation state back in December 6, 2017. The martyrs included 111 children, 22 women, 6 Palestinians with special needs, and 108 martyrs in Israeli strikes on Gaza. There were also 13 prisoners, who were killed in Israeli jails, and one Palestinian killed in an assassination in Malaysia.

According to the study, ‘Israel’ has killed as well 258 Palestinians in Gaza’s great return march protests, which started in March 30, 2018, including two journalists and four paramedics.

The Israelis have killed 111 Palestinian children following Trump’s announcement of occupied Jerusalem as capital of ‘Israel’. 69 of them were killed in Gaza’s protests, while three were fetuses, which were killed with their mothers in Israeli strikes on the besieged enclave.

Meanwhile, 13 Palestinian prisoners were killed in Israeli jails. The occupation state continues to withhold the bodies of 40 Palestinians, who have been killed after Trump’s announcement.

Israel committed 415 violations against Palestinian journalists in past year

Israel military outdoes itself in a week of violence toward Palestinians