You Are Here: Home → Levy: The Pigs of Kibbutz Lahav – Look at Them and See Israel

Levy: The Pigs of Kibbutz Lahav – Look at Them and See Israel 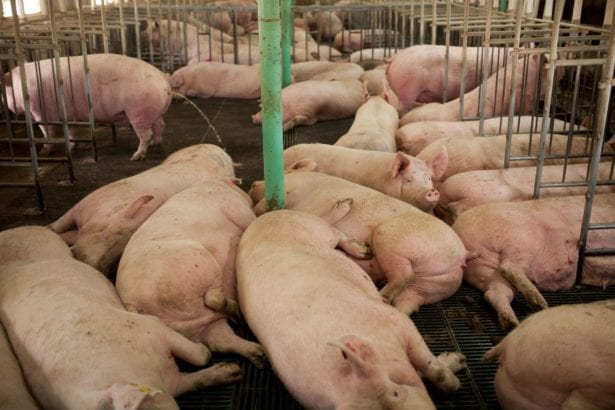 Around Kibbutz Lahav, before it was founded, were Bedouin villages whose inhabitants were expelled to the Hebron Mountains and to Sinai. Israel never heard their cry either…

By Gideon Levy, reposted from the Israeli newspaper Haaretz

The pigs of Kibbutz Lahav scream in pain. “The high-pitched, thin, hysterical screams emerge from newborn piglets. In a room that looks like a narrow, dark crawl space, lit by artificial red light, workers are sitting and cutting off the tails and penises with a kind of scissors.” (Haaretz Hebrew edition, April 10).

The description could leave no reader indifferent. But the kibbutz business manager, Yossi Cohen, was in fact indifferent to this description, which, as he put it, “serves an agenda.” Documentation in the slaughterhouse was illegal, he said. The report should be directed against the 95 percent of Israelis who eat meat, not against his kibbutz; at Lahav there are good people, he wrote (Haaretz Hebrew edition, April 17).

There are indeed good people at Kibbutz Lahav. I knew two of them, the late Tamar Golan, and Haim Oron, and no one is more deserving of that description than they are. Lahav is also a kibbutz that belongs to a moment that is entirely well-intentioned. But in a place that is all good intentions and good people, the most terrifying crimes are being committed. It’s 2020, and it seems that we no longer need to explain that the torture of helpless animals is like the torture of human beings.

Would you want to live in a neighborhood with a gallows or a slaughterhouse? Could you close your ears to the terrified screams of the tortured animals? Apparently yes. Israelis are used to living in repression and are impervious to what is done in their name and in their backyard, the screaming of pigs or the crying of children abducted from their beds in the middle of the night. Look at Lahav and see Israel. They both live in peace with these actions.

It is impossible to be humane and remain silent in the face of the torture of animals, just as it is impossible to fight for human rights and remain silent as human beings are tortured. The attempt by the manager in the moral kibbutz to pass on the blame for the torture of pigs onto 95 percent of Israelis is typical. We are all to blame for the fact that Kibbutz Lahav cuts off the tails of piglets. We are all to blame for the fact that “the piglet pulls itself on its front legs into a corner to escape the strike of the swift attacker. Its back legs are paralyzed. One of them drags a leg, swollen like a balloon, some lie convulsing uncontrollably. A worker is seen lifting up a little piglet and slamming its head into the ground, over and over. Then it’s thrown into the container, still twitching.” We are all to blame for our silence and for consuming meat, but this is all happening in Lahav, and Cohen sees nothing bad about it. He’s working according to regulations.

The “crime” of Glass Walls, the organization that documented what is happening in Lahav, is the most important and influential action that can be taken now. Like other injustices and crimes, awareness determines experience. Most meat eaters are not aware of what is happening in the industry that brings them their steak. It’s not the place where the animals live that’s the worst. Rather, it’s their short and tortured lives, which should shock anyone with a conscience. Methodical torture, from the moment they are born until they are slaughtered, is the crime. Their death is actually the happiest moment in their lives, perhaps the only one.

Lahav is a kibbutz with many achievements. The app INakba, from the organization Zochrot, reminds us, however, that around Kibbutz Lahav, before it was founded, were Bedouin villages whose inhabitants were expelled to the Hebron Mountains and to Sinai. Israel never heard their cry either, just like the screams of the piglets, which should have torn apart the souls of the moral, socialist pioneers of Kibbutz Lahav.

Gideon Levy is a Haaretz columnist and a member of the newspaper’s editorial board. Ha’aretz is a major Israeli daily newspaper.

Torture, Israeli-style – as described by the interrogators themselves
Special Report: Israel’s Treatment of Americans
How Israeli doctors enable the Shin Bet’s torture industry
Most JNF – KKL forests and sites are located on the ruins of Palestinian villages