You Are Here: Home → JTA: “Lauder vs. Adelson: Which Jewish billionaire has Trump’s ear on Israel?”

JTA: “Lauder vs. Adelson: Which Jewish billionaire has Trump’s ear on Israel?” 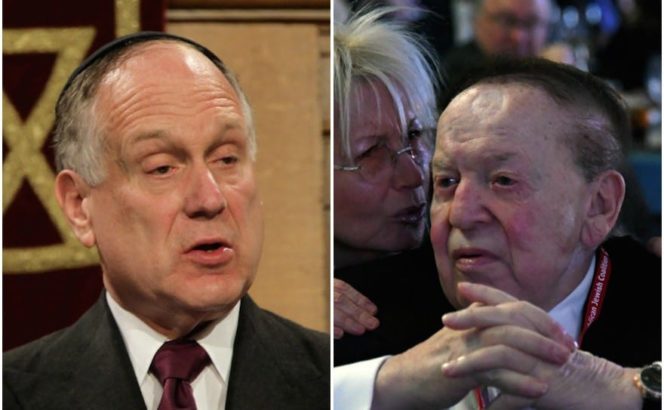 Ron Kampeas writes in JTA that two billionaires are advising Trump on Israel.

“…Trump, according to reports, takes calls on the issue from Sheldon Adelson, the casino magnate, and Ronald Lauder, the cosmetics heir and the president of the World Jewish Congress. Both are major supporters of Jewish and pro-Israel causes.

The wrinkle is that Adelson and Lauder seem to be at odds on what they’re telling the president. Lauder, reportedly, is pressing Trump to court Palestinian Authority President Mahmoud Abbas. Adelson, reportedly, wants him to focus on moving the US Embassy to Jerusalem and discounts the Palestinians as reliable peace partners.

Trump, who this month gave Abbas the White House treatment and has carved out buddy time for him during his scheduled Middle East tour next week, appears to be tilting toward Lauder. And that’s confounding the right-wing pro-Israel community, which tends to line up with Adelson.

Here’s a breakdown of the actors and their agendas. Spokespeople for Adelson, Lauder and Israeli Prime Minister Benjamin Netanyahu declined to comment, and the White House did not return a request for comment.

The relationship with Trump

Lauder, a fellow New Yorker, has been friendly with Trump for decades, dating at least to Lauder’s run for mayor of the city in 1989 — a period when local politicos avidly courted the glitzy developer. (Lauder lost the Republican primary to Rudolph Giuliani, who went on to lose in the general election that year but won in 1993.) Both Lauder and Trump are graduates of the University of Pennsylvania’s Wharton business school. 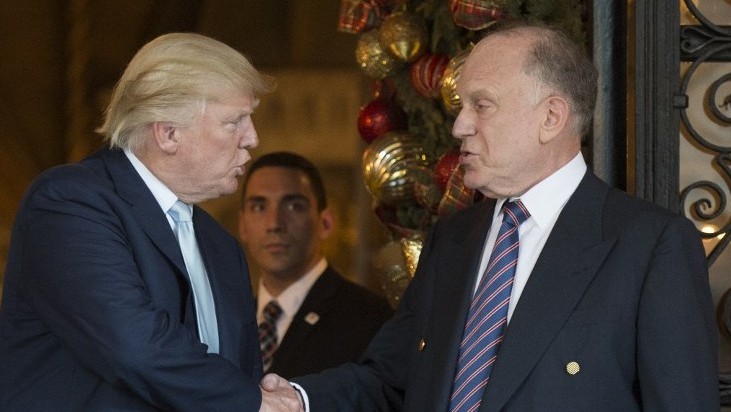 Donald Trump shakes hands with Ronald Lauder, President of the World Jewish Congress, after a meeting on December 28, 2016 at Mar-a-Lago in Palm Beach, Florida. (AFP/DON EMMERT)

Adelson and Trump have known each other since at least the mid-2000s, when the latter opened an eponymous resort and casino on the former’s Las Vegas turf. They drew closer last year after Adelson – burned in the 2012 election after he backed a losing Republican primary contender, Newt Gingrich – waited until much of the primaries blood was spilled and endorsed Trump in May.

Trump has teased Adelson about waiting so long to come around, but also appreciated the boost. Adelson is believed to be the first campaign donor to secure a seat on the dais during an inauguration.

Adelson plowed tens of millions of dollars into the general election, both for Trump and other Republicans, and then at least another $5 million, a record, into the inaugural festivities.

Lauder’s contributions to the bid to elect Trump and Republicans generally topped out at under $1 million, but he did something Trump cherishes in his loyalists: supporting him when no one else does.

In January, when Trump released a statement marking International Holocaust Remembrance Day that omitted any mention of Jews, Lauder was the only Jewish leader to give him a pass – and, indeed, to praise the statement.

Two organizations that Adelson funds and that otherwise had been supportive of Trump, the Republican Jewish Coalition and the Zionist Organization of America, were critical. 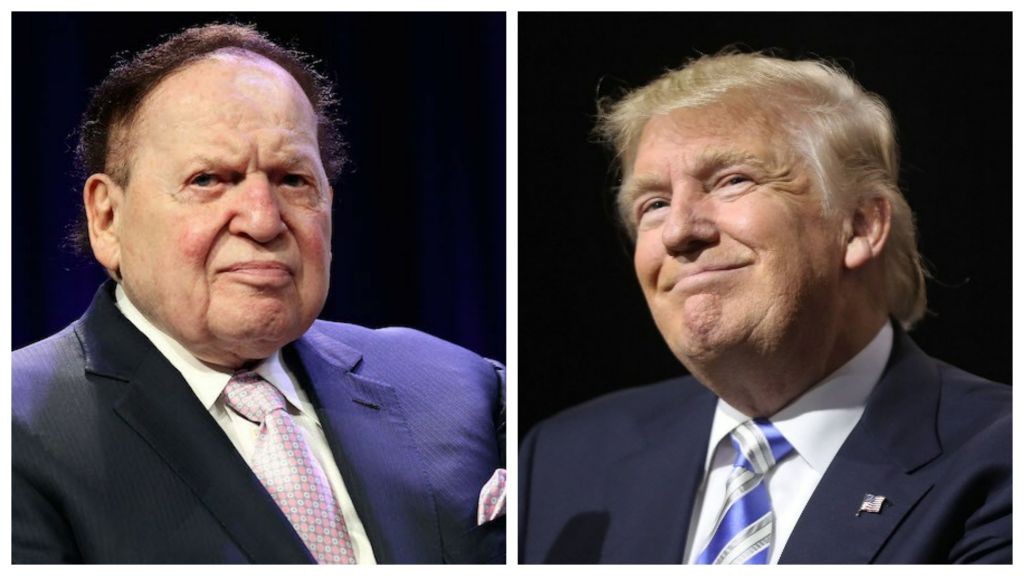 The relationship with Netanyahu

Lauder and Netanyahu enjoyed friendly relations for years — both Lauder and Adelson have been asked by Israeli investigators about gifts they have given the prime minister over the years. In the 1990s, when Netanyahu’s career took off, Lauder was a key US conduit. Netanyahu asked Lauder to try to help broker a peace deal with Syria during his first term as prime minister, from 1996 to 1999. In a highly unusual move in ’99, when Lauder chaired the Conference of Presidents of Major American Jewish Organizations, the billionaire came to Israel during campaign season and effectively endorsed Netanyahu in a speech.

The two reportedly fell out six years ago, when Lauder refused to use his ownership stake in Israel’s Channel 10 to censor reporting there into allegations of corruption by Netanyahu and his wife, Sara.

Adelson shifted from the politically neutral support for Israel typical of much of the pro-Israel community to outright support for a political party — Netanyahu’s Likud — in 2007. The trigger was then-Prime Minister Ehud Olmert’s embrace of an aggressive peace plan known as the Annapolis process. Adelson believed (and believes) that Palestinian statehood, at least under the current Palestinian leadership, would be catastrophic for Israel.

His best-known expression of support is his ownership of the pro-Netanyahu newspaper Israel Hayom, a free publication that has come to play a dominant role in the Israeli media. The relationship between Netanyahu and Adelson remains strong; the newspaper, which leads in circulation in Israel, recently changed editors in part, reportedly, because the longtime incumbent was not sufficiently pro-Bibi.

The relationship with Abbas

Rumors that Lauder and Abbas were close were confirmed during Abbas’ visit at the beginning of May when, the night before meeting Trump, the Palestinian leader dined at Lauder’s home in this city’s Georgetown neighborhood. Notably present at the dinner: representatives of the Trump administration. Notably absent: anyone from the Israeli Embassy.

Lauder and Netanyahu, who have dodged on-the-record comment over their disagreements, were ready to dish to another wealthy philanthropist: Isi Leibler, the Australian travel agency magnate who retired to Israel and has become a prominent activist on its right wing. In his column for The Jerusalem Post on their conversations, Leibler related a lengthy harangue he delivered to Lauder in which Leibler described Abbas as “an inveterate anti-Semite” who speaks “with a forked tongue, portraying himself as a man of peace and moderation to the outside world while continuing to encourage religious hatred and anti-Semitism among his own people.”

Leibler quoted Lauder as saying that he believes Abbas is ready to make “major concessions” toward peace, although he did not outline what concessions. Leibler also wrote that Netanyahu told him that Lauder was his “biggest challenge to overcome” because of Lauder’s friendship with Trump.

Adelson has no relationship with Abbas; Olmert’s overtures to Abbas are what drove Adelson into the arms of the Likud. He may be key to helping Netanyahu overcome his “challenge,” however: The news site Axios this week quoted sources close to Adelson as saying he is “furious” with the Trump administration for not yet fulfilling the Republican’s campaign pledge to move the US Embassy to Jerusalem, and that the Palestinians are “impossible” to negotiate with.