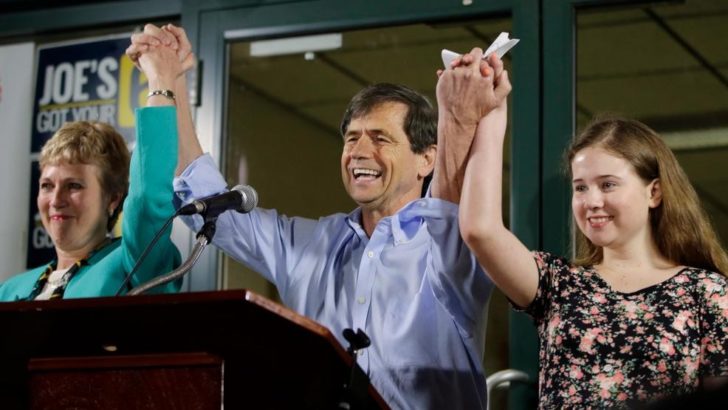 Sestak, a retired Navy admiral and two-term Democratic Pennsylvania congressman, called for easing Israel’s blockade of Gaza. He then ran in a primary bid against Arlen Specter, the pro-Israel senator who had just switched from Republican to Democrat. The Dem establishment, including Obama, backed Specter, but Sestak won the primary. Conservative pro-Israel groups spent millions targeting Sestak, who then narrowly lost the general election to Republican Pat Toomey…

WASHINGTON (JTA) — Joe Sestak, whose failed 2010 Senate race was a precursor of this decade’s shift among Democrats toward increased criticism of Israel’s government, is running for president.

Sestak, 67, is the 25th candidate for the Democratic presidential nomination. His announcement Monday referred to his foreign policy experience, and his advocacy for tax reform and addressing climate change.

Sestak was a retired Navy admiral and two-term Democratic Pennsylvania congressman in 2009 when he announced a primary bid against Arlen Specter, the Jewish senator who had just switched parties from Republican to Democrat.

The party establishment, including President Barack Obama, backed Specter, but Sestak won the primary. He went on to narrowly lose the general election to Republican Pat Toomey, who is still one of the state’s two senators.

Sestak was one of the first endorsees of the then newly established J Street, a Jewish Middle East policy group that favors a two-state solution and pressure on Israel to bring it about.

Sestak’s departures from mainstream pro-Israel orthodoxies, rare at the time, have become commonplace among Democrats, and J Street is now a force to be reckoned with among Democrats vying for Congress, endorsing more than half the party’s caucuses in Congress.

Sestak ran again for the Senate in 2016, walking across the entire state to campaign, but lost the primary.

Leading conservatives will launch a new pro-Israel group this week with a scathing attack on Rep. Joe Sestak, the Democratic Senate candidate in Pennsylvania, the first shot in what they say will be a confrontational campaign against the Obama administration’s Mideast policy and the Democrats who support it.

The Emergency Committee for Israel’s Leadership unites two major strands of support for the Jewish state: The hawkish, neoconservative wing of the Republican Party, many of whom are Jewish, and conservative Evangelical Christians who have become increasingly outspoken in their support for Israel. The new group’s board includes Weekly Standard Editor William Kristol and Gary Bauer, the former Republican presidential candidate who leads the group American Values, as well as Rachel Abrams, a conservative writer and activist.

While President Barack Obama and Israel Prime Minister Benjamin Netanyahu attempted to put the best public face on their differences after a White House meeting last week, the two leaders have had a contentious relationship. Some American backers of Israel, as well as many Israelis, remain deeply suspicious of Obama’s efforts to press Israel toward specific policy shifts and to improve American relations with the Muslim world.

The new committee declined to disclose its funding — as a 501(c)(4) advocacy organization, it isn’t required to — but said it had raised enough to air its first ad, starting this week, on Fox and CNN and during a Philadelphia Phillies game. The ad attacks Sestak for signing a letter criticizing Israel’s blockade of Gaza while not signing a defense of Israel circulated by the American Israel Public Affairs Committee and for appearing at a fundraiser for the Council on American Islamic Relations…”  Read more