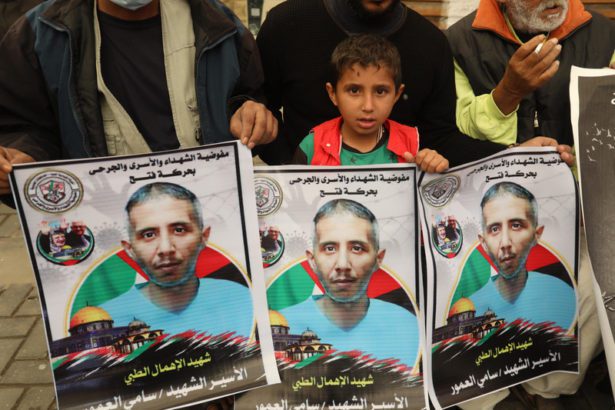 People in Gaza protest following the death of Sami al-Amour.

14 years ago, they got engaged. He spent 13 years in an Israeli prison, and now has died – apparently from deliberate medical neglect by Israeli prison authorities.

Ghada Abu Jaame and Sami al-Amour had big plans for the future.

The couple were preparing to get married once Sami was released from jail.

That dream has now been shattered. Sami died earlier this month after being transferred from an Israeli prison to an Israeli hospital.

He and Ghada met each other 14 years ago yet were soon forced apart. Sami spent 13 of the following years behind bars.

“It shocks me that our long love story ends with this tragedy,” Ghada said just a few days after Sami’s death.

Human rights groups suspect that Sami died as a result of intentional medical neglect by his jailers.

Sami had a congenital heart problem and other health issues during his imprisonment. Never receiving adequate care in Israel’s Nafha prison, he was transferred to Soroka hospital in the city of Beersheba, where he died early on 18 November.

Ghada had been unable to sleep the previous night. At 5 am, she checked the news on her mobile phone.

That was how she learned about Sami’s death.

“I started screaming,” she said. “How could this happen?”

The first time was when her father Muhammad was killed. He was shot by Israeli forces as he worked on farmland in southern Gaza on 3 March 2018, dying from his wounds later that day.

The second time Ghada had her heart broken was when Sami died. The Israeli authorities “deliberately killed Sami,” Ghada said.

During their final telephone conversation, Sami informed Ghada that he was in great pain and could no longer bear it.

An agreement to pay for treatment in an Israeli hospital had been signed by the Palestinian Authority, according to Ghada. Israel makes the PA – which is reliant on aid from the European Union and other donors – pay a variety of bills associated with Palestinian prisoners’ welfare.

Rather than bringing him to hospital, the authorities took him to Ashkelon prison. He had cuffs placed around his hands and feet while he was being transported from one prison to the other.

During the conversation, Sami stated that “the cuffs hurt me so much,” Ghada recalled.

After approximately 14 hours in Ashkelon prison – during which time his health deteriorated further – Sami was eventually brought to Soroka hospital. It was there that he died.

According to The Jerusalem Post, he had been convicted of attempted murder and sentenced to 19 years of imprisonment in 2008. Israel treats all resistance to its brutal apartheid system and its military occupation of Gaza and the West Bank as terrorism.

Sami and his brother Hamada were arrested during an incursion by Israeli troops into Gaza in April 2008.

Both were imprisoned, with Hamada being released after his 12-year sentence expired. Since his release, Hamada has married and become a father.

Despite Sami’s health problems, his family had held out hope that they would welcome him back to Deir al-Balah, the area of Gaza where he grew up, as soon as his jail sentence ended.

Sami himself had been preparing for his release. He had recently obtained a degree in social sciences from Al-Quds Open University and had wanted to undertake further studies.

He and Ghada had discussed forming a family. Sami wanted to have sons named Yasir and Watan.

The couple had decided where they would live. Last year, Sami asked his family to buy some land for him so that he could build a house on it.

Sami’s mother Suad was last able to visit him in prison four years ago.

“And then after all those painful years [of his imprisonment], I was told that he was dead,” Suad said. “I couldn’t believe it. How could I?”

His sister Rudaina, now aged 18, was still a child when Sami was jailed. She was never able to visit him in jail.

“I remember the last time I saw him. I was wearing a red blouse that he had bought for me. I was afraid because the Israelis had invaded our home. He hugged me and said, ‘Don’t be afraid.’ I didn’t see him for the next 13 years and couldn’t believe that he died. I have kept that red blouse. I still have it.”

Muntasir al-Naouq from the Waed Captive and Liberators Society alleged that Sami Al-Amour is “a new victim of the crime of Israeli medical negligence.”

Israel’s negligence is “a systematic policy that has caused the death of other Palestinian prisoners, who were ill, in previous years,” al-Naouq said.

The injustice has been exacerbated by Israel’s withholding of Sami’s body. As a result, his family is unable to organize a funeral.

“Israel deprived me of seeing my son alive,” Sami’s mother Suad said. “They can’t deprive me of seeing him dead. I want to give him a hug and kiss one last time.”

According to al-Naouq, Israel is now refusing to hand over the bodies of eight Palestinian prisoners to their families. The eight include Sami’s body and those of two other prisoners from Gaza.

Before he died, Sami was among 230 people from Gaza held behind Israel’s bars. In total, 4,650 Palestinians are now being detained by Israel.