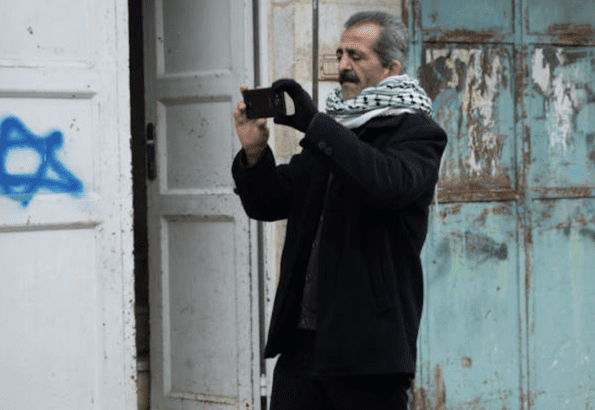 Israel’s internal security service, Shin Bet, interrogated a field researcher for rights group B’Tselem who they said was always around during Palestinian activity, and has been “making trouble and threatening the army.”

His troublemaking includes reporting on an unarmed Palestinian who was shot in the neck and paralyzed.

The security service coordinator, who identified himself as Captain Eid, told the researcher, Nasser Nawaj’ah, that he was “making trouble and threatening the army.” Captain Eid mentioned in this regard the incident involving Harun Abu Aram of the village al-Rakiz, who is lying paralyzed in hospital after a solider shot him in the neck because he tried to stop the army from seizing a neighbor’s generator.

Nawaj’ah is a resident of Sussia, in the southern West Bank. His job is to document operations by official Israeli forces like the army, the Civil Administration and the police, as well as actions taken by settlers, against Palestinians. He photographed, for example, the arrest of five boys from the village of Umm Lasafa by soldiers last Wednesday.

Nawaj’ah knew he was summoned to the Shin Bet when he was detained at a military checkpoint between the area of Sussia and the city of Yatta a week ago Saturday. He was on his way to visit his wife’s grandfather, who was hospitalized. After an hour-long detention, he was told to speak with the Shin Bet representative (using one of the soldiers’ phones), who told him that he could decide between being arrested immediately for the following day’s questioning, or to give his word and come himself.

The warning meeting took place the next day in a room used by the Shin Bet in the Civil Administration building at the Beit Fajar junction (Gush Etzion Junction). Nawaj’ah told Haaretz that the coordinator told him he didn’t want to arrest him but just to have a “chat.” According to Nawaj’ah, he asked him “why he was threatening the army” and said he was “generating chaos at the checkpoints, threatening soldiers, bringing the ‘B’Tselem shabab’ and creating friction.”

Nawaj’ah also said that the Shin Bet officer explained to him, regarding arguments with soldiers, that “the army can also make mistakes.” The officer remarked, according to Nawaj’ah: “Look what happened to Harun Abu ‘Aram. They shot him by mistake.” Nawaj’ah took this comment as a veiled threat, but the Shin Bet responded to Haaretz that “at no stage did the Shin Bet representative threaten Mr. Nawaj’ah – neither explicitly nor as a hint.”

Captain Eid Id said that there are video clips showing him wherever there is a Palestinian activity. He was also asked, during the “chat”, about his salary from B’Tselem. Nawaj’ah answered that he was doing his job, that it was legal and without a hint of violence. The meeting lasted about 15 minutes, and the coordinator kept his promise that Nawaj’ah could travel to the funeral of his wife’s grandfather, who died that night.

The Shin Bet commented that Nawaj’ah was called in for questioning, in which he was warned that “he has to avoid violent activity or the type that is liable to lead to violence.” Although the meeting with the Shin Bet had already taken place, he is still registered with the soldiers at the checkpoint on a list of people who can be detained. Soldiers at the checkpoint had held him twice last week, preventing him from proceeding on his way and he needed the intervention of a lawyer and a journalist in order to leave the place.