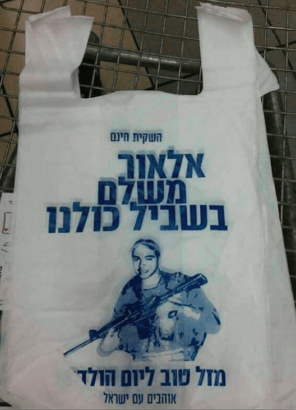 Jonathan Ofir reports in Mondoweiss that a major Israeli supermarket chain is distributing free grocery bags containing the image of an Israeli soldier who murdered a wounded Palestinian in cold blood.

Ofir writes that the bag has a drawing of the soldier and says:  “Happy birthday. Love from the nation of Israel.” Ofir adds: “which means ‘Jews.”