You Are Here: Home → An Israeli Soldier Shot a Palestinian in Front of Her Kids. Where’s Her Compensation?

An Israeli Soldier Shot a Palestinian in Front of Her Kids. Where’s Her Compensation? 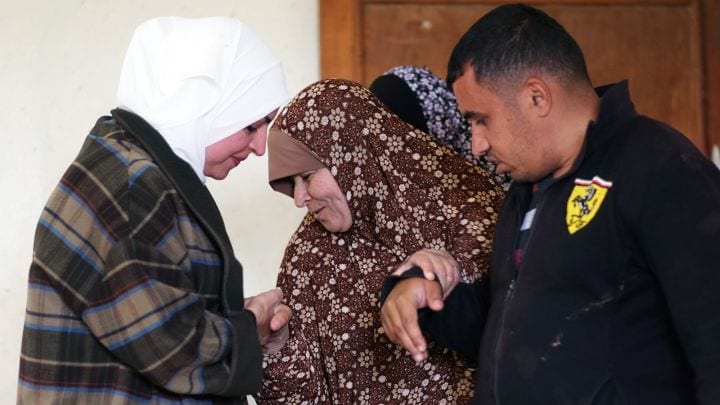 By Gideon Levy and Alex Levac in Ha’aretz

For three months, Dia Mansur was certain his mother was dead. He was 15 years old when he saw her collapse in the living room of their home, felled by a bullet fired by a Israel Defense Forces soldier that sliced into her face, tearing it apart. He saw his mother lying on the floor, blood oozing from her mouth and streaming toward the kitchen. Dia fled in a panic to the home of his father, who lived next door with his second wife, his brother’s widow. Shortly afterward, Israeli forces, both mistaravim (members of an undercover counter-terrorist unit) and uniformed troops, arrived and arrested Dia and his father.

Dia spent the next three months in the interrogation rooms of the Shin Bet security services in Petah Tikva. His captors told him his mother was dead. Dia mourned in the alien surroundings. It was not until the questioning ended and Dia was transferred to Megiddo Prison that he learned, during a phone call with an uncle, that his mother was in a Nablus hospital – alive. That was 13 years ago. Dia served 28 months in prison; his father, three years.

Dia is now a taxi driver and the father of three; his father, Raad, is a Palestinian Authority policeman; and his mother, Basama, is a disabled, broken woman who has difficulty walking and speaking. She is supported on both sides as she enters the same living room where, on February 12, 2004, a bullet altered the trajectory of her life.

Her house, in the Dahiya neighborhood of the West Bank city of Nablus, atop Mount Gerizim, is reached by way of an extremely steep road. Below, the dull gray houses of the densely packed Balata refugee camp evoke a favela in Rio. Basama, now 48, has 10 children. When she was wounded and her husband was arrested, their offspring were left without parental care. But even when she returned home, after six months of hospitalization, she was unable to look after the children; they were raised by relatives and neighbors.

Last month, B’Tselem, the Israeli Information Center for Human Rights in the Occupied Territories, published a report (in Hebrew and English) on this subject. It reveals that, from the start of the second intifada, in September 2000, to the end of February 2017, Israel killed 4,868 noncombatant Palestinian civilians, more than one-third of them (1,793) were children and adolescents below the age of 18. Thousands of others, who were also not involved in fighting, have been wounded and permanently incapacitated. Next to none have received their due: compensation from the state that caused their condition.

Titled “Getting off Scot-Free: Israel’s Refusal to Compensate Palestinians for Damages Caused by its Security Forces,” the B’Tselem report paints a disturbing picture. The Palestinians have despaired altogether of submitting compensation claims, the NGO’s researchers found – even in cases where the victim was clearly an innocent civilian and no “warfare activity” was involved. In any event, Israel has stretched that concept to the limit and beyond, through legislation, regulations and High Court of Justice rulings, in its efforts to avoid its elementary duty to compensate the innocent victims of its actions. As per the report, “this exemption is based on the assumption that warfare entails risk and damages that are substantially different than those encountered during everyday circumstances.”

With most of the injuries inflicted during policing operations or arrests by Israeli troops, at sites such as checkpoints – which have little or no connection to “warfare activity” per se – Israel has changed the rules and regulations so that the term now encompasses almost all the activity of its security forces. In the past few years, it seems that just about everything the IDF and the Border Police do in the occupied territories is considered warfare activity, according to Israel’s perception. In other words, Israel can do just about anything it wants and doesn’t have to take any responsibility for it.

From 2002 to 2006, the Palestinians submitted an average of 300 claims for compensation a year. But from 2012 to 2016, only 18 claims per year were submitted, 94 percent fewer than during the earlier period. The dramatic decline is due above all to the Palestinians’ realization that their complaints are doomed to almost automatic rejection. According to the B’Tselem report, “Many Palestinians have been injured in the course of such activities, which are not combat actions. Therefore, there is no justification for exempting the state from paying damages for harm sustained during these activities.”

Basama Mansur, too, did not seek compensation. In the three years following the incident in which she was wounded, her husband and son were in jail, and there was no one to act on her behalf. Afterward, they tried to hire an Israeli lawyer to help them, but were quickly informed that they had no chance of getting compensation, not even after the incapacitation of a woman who was standing innocently at her window.

She was cooking in the kitchen that day in 2004, when her children ran in breathlessly, saying: “There are special forces in the yard.” According to Basama’s sister-in-law, Ataf Mansur, who lives next door, at first they thought the group outside were local shabab – unruly youths – but afterward it became clear that these were undercover forces. It was somewhere between 1 P.M. and 2 P.M. Basama rushed to the window to see what was going on and was hit by a dumdum bullet, apparently at short range. It penetrated her left cheek and exited through her mouth; bullet fragments lodged in her neck and spine, and a few also penetrated her forehead and chin.

Basama collapsed, then tried to crawl toward the kitchen to summon help. But only young children were at home, and there was little they could do for her. She made her way back to the living room and lay there for about three hours, bleeding and helpless.

The children screamed in fear and horror. Outside, a Palestinian ambulance had arrived to provide assistance, but the soldiers prevented it from approaching. A neighbor tried to explain to them that there was a wounded woman upstairs, but in vain. Basama almost bled to death. Finally soldiers entered the apartment, carried her out and placed her on the rocky ground, where an IDF paramedic bandaged her.

They then carried her on a stretcher to the Palestinian ambulance, which was waiting on the slope below. She was rushed to Rafidia Hospital in Nablus, where she lost consciousness. She remembers nothing more until the time she awoke from her the coma, two weeks later; afterward she underwent seven hours of surgery.

There’s very little furniture in the house today, and even it is shabby. The walls are bare opf all but an old tapestry. The bullet holes in the walls have long since been repaired, but there’s still a hole in the window. The troops fired more than one round into the house. They’d come to arrest Dia and his father. According to the neighbors, no one fired at the soldiers or endangered them, but after 13 years it’s difficult to ascertain exactly what happened that day. Israeli forces rarely entered this neighborhood in those days, not even during that violent period. In light of the relatively light sentences they received, Dia and Raad were apparently not suspected of committing serious offenses.

When Basama regained consciousness, she discovered that she was blind, could not move her legs and had difficulty speaking. She was subsequently transferred to the rehabilitative hospital in Beit Jalla, near Bethlehem, where she spent three months. Her body felt a like a log when she got there, she recalls now. After the rehabilitation process she was given an 80-percent disability rating by the Palestinian Health Ministry. Her vision returned and she is also able to move about somewhat.

Basama was away from home for about half a year – from February to August. Her children were then between 3 and 18 years old. Dia was in prison. Samir, an uncle, brought the children food. In the course of the six months, she went home once, for a short time, in order to lift her spirits – but had a breakdown when she realized she would never be able to raise her children properly. Even now she is very restricted in her movements, and her speech is slow, indistinct and heavy. Eating is also an onerous task.

Not long after Dia was released from prison, he was seriously wounded. He was in a store in Kafr Qalil, a village near Nablus, he relates, when children were throwing stones at soldiers outside. Dia was shot in the stomach and spent two months in hospital. He still has six pieces of shrapnel in his body.

“I lost 13 years of my life,” his mother says, in a subdued voice. “I was 35, and since then I cannot look after my children or myself. No one asked what happened. No one cares.”