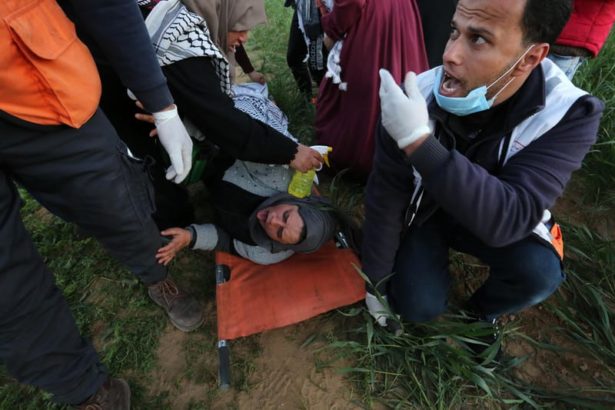 The 42nd weekly protest at the Gaza border ended in the death of one Palestinian and multiple injuries at the hands of Israeli snipers.

A woman shot during protests in the occupied Gaza Strip on Friday is the first Palestinian fatality at the hands of Israeli occupation forces in 2019. A Palestinian man was shot and seriously wounded by Israeli forces in the West Bank the same day.

Amal al-Taramsi, 44, died after she was shot in the head by live fire during Great March of Return protests east of Gaza City. She was 200 meters away from the boundary fence at the time of her injury, according to the Gaza-based human rights group Al Mezan.

Al-Taramsi is the third female to be killed during the protest series that was launched on 30 March last year. The other two female fatalities were medic Razan al-Najjar and 14-year-old Wesal al-Sheikh Khalil.

Twenty-five others suffered injuries with Israeli live ammunition during the 42nd Friday of “The Great March of Return” along the eastern borders of the besieged Gaza Strip.

Volunteer paramedic Mustafa al-Sinwar, 22, was seriously injured when he was hit in the neck with a gas canister while on duty during protests east of Khan Younis in the south of Gaza.

Husni Salah, 25, a photojournalist working for AFP news agency, was hit directly in the face with a gas canister while covering protests along the eastern boundary of central Gaza.

Another journalist, Hussein Karsou, 44, was also hit in the face with a gas canister east of Gaza City.

The ministry mentioned that Israeli forces targeted a Palestinian ambulance by repeatedly firing dozens of tear-gas bombs in its way, resulting in a number of Palestinian protesters suffering from tear-gas inhalation.

Nearly 150 Palestinians were injured during Friday’s protests. Graphic video shows one person said to be seriously injured after being shot in the head.

Large Palestinian crowds gathered alongside the eastern borders of the Gaza Strip to take part in the weekly march to break the ongoing Israeli siege.

“The Great March of Return” protests were launched on March 30th by thousands of Palestinian civilians in Gaza — which has suffered from a decade-long Israeli siege — who took to the borders to demand their right of return as refugees to their original homelands, now in present-day Israel.

Meanwhile, in the occupied West Bank, a Palestinian man was shot by an Israeli civilian and soldiers.

The Israeli military claimed that Ghazi Skafi, 35, was attempting to stab soldiers at a military outpost in the Kiryat Arba settlement near Hebron.

Video shows the man being shot twice, first by a man in civilian clothes and then by a soldier in uniform:

“Kill him,” an unseen man says in English in the video.

Spectators are also heard stating “God is good, God is good” and “Burn in hell you little bitch” in North American-accented English.

The below video shows Skafi lying on the street with a blanket on top of him. The camera pans to the right and shows what appears to be a small knife on the ground.

Skafi was being treated at hospital for wounds to the abdomen and legs, according to media reports.