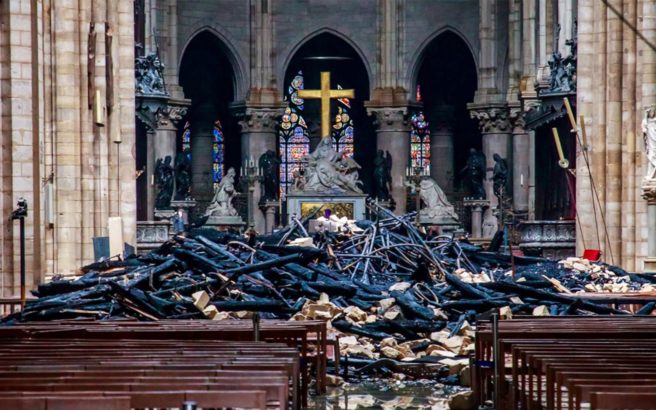 Debris inside the Notre Dame Cathedral in Paris on April 16, 2019, a day after a fire that devastated the iconic building. (Christophe Petit Tesson/Pool/AFP)

A prominent Israeli rabbi suggest that the Notre Dame Cathedral fire may have been divine retribution, indicates that the burning of churches in Israel may be problematic only in that they may be rebuilt. Israeli ultra orthodox news site calls Notre Dame “a house of idol worship.”

The Times of Israel reported in Radical rabbi says Notre Dame fire retribution for 13th-century Talmud burning that a prominent extremist rabbi believes the Notre Dame Cathedral fire may have been “divine retribution for the mass-burning of Talmud volumes by French Catholic priests” in 1242.

Rabbi Shlomo Aviner, the rabbi of the illegal Beit El settlement, instructs Jews that they need not feel saddened by the fire that devastated the 12th century cathedral, priceless artifacts, and works of art.

Aviner said: “Christians must be punished.”

[Christianity] is our number one enemy throughout history. [They] tried to convert us by arguments and by force, carried out an inquisition against us, burned the Talmud, expulsions, pogroms. Western anti-Semitism draws from Christianity’s hatred of the ‘murderers of God.’ It also had a role in the Holocaust.

The first great Talmud burning happened in Paris, right there at the Notre Dame Cathedral square. It was the result of the Paris trial in which Jewish sages were forced to debate Christian sages, and the result was the burning of the Talmud. Volumes of Talmud were brought in 20 carts and burned there, 1,200 Talmud volumes. So [the fire demonstrates] ‘there is justice and there is a Judge.

The 1240 Disputation of Paris, in which rabbis were forced to defend accusations that the Talmud was anti-Christian, was remembered by medieval Jews as a traumatic event. The public “trial” culminated in the burning of some 1,200 volumes of Talmud and other Jewish holy texts in Paris in 1242.

The Israeli newspaper Ha’aretz reports that the burning of Talmuds had been triggered by a Jewish man named Nicholas Donin who had converted to Christianity. Donin traveled to Rome and presented the pope with a list of complaints about the Talmud. Among them the fact that a number of its passages “blasphemed Jesus and Mary, and attacked non-Jews.” During the French disputation about the Talmud, it was Donin who argued against it,* ultimately resulting in the pope’s decree that the books be “burned at the stake.”

In an online discussion as the Notre Dame Cathedral burned, Avner was unwilling to take a definite stand on the “divine retribution” theory. He conceded that “we do not know the secrets of God”; yet he dismissed the possibility that several recent fires in Israel could be punishment.

Aviner does not encourage the burning of churches in general – “for the time being.” However, he hesitated to condemn the practice inside Israel, stating that the  “issue is more complicated” in the Jewish State. When a church is destroyed, it will likely be rebuilt, and building a church in Israel “is a greater transgression than leaving one intact.”

Mondoweiss reports that, far from being a fringe figure, Aviner is “considered to be one most important rabbis of the religious nationalist sector. He is a prolific writer, having published more than 200 books.”

It points out that Aviner does not merely state his own opinion about church-burning, but quotes two sources (Rabbi Menachem Mendel Kasher and the Satmar Rabbi), a fact which “says volumes about the discourse among his followers and students.”

Mondoweiss notes: “Several churches have been burnt in Israel in the last few years, and the police have been spectacularly useless in capturing the arsonists. In several cases, the arson was accompanied by slogans familiar from ‘price tag’ attacks in the West Bank (mostly along the lines of Jewish vengeance).”

The targeting of homes, vehicles, and Palestinian individuals have also been a daily occurrence.

• Israel’s Jerusalem Post newspaper reports that Israel’s JDN news also “seemingly ascribed divine justice to the burning of the cathedral when it cited a phrase from Jewish liturgy, ‘and evil in its entirety will go up like smoke,’ after noting in its Monday night report that the fires were yet to be brought under control.” JP reports that JDN “headlined its article ‘Paris: Notre-Dame church which serves as a house of idol worship, goes up in flames.’ JP explains: “Some prominent rabbis, from medieval to modern times, have categorized Christianity as ‘idol worship.”

• Many rabbis in Israel oppose these teachings. Some Israeli rabbis specifically work for Palestinian human rights, e.g. Rabbis For Human Rights. The American Jewish Committee announced that it would donate funds to help repair Notre Dame: “Whether Catholic or not, Notre Dame Cathedral is an integral part of our shared legacy and soul. It represents centuries of French and European faith, culture, history and imagination.”

A number of authors have discussed anti-Christian passages in the Talmud. Peter Schäfer’s book Jesus in the Talmud, published by Princeton University Press, notes that the Talmud referred to Jesus as a bastard and his mother Mary as an adulteress; he is depicted as “sitting forever in boiling excrement.”

According to the Talmud, Jesus was executed by a proper rabbinical court for idolatry, inciting other Jews to idolatry, and contempt of rabbinical authority. All classical Jewish sources which mention his execution are quite happy to take responsibility for it; in the talmudic account the Romans are not even mentioned.

Shahak reports in another book on the subject that a 1996 Ha’aretz article stated the following (bracketed phrases inserted by Shahak]:

A check of main facts of the [Jewish] historiography of the last 1500 years shows that the picture is different from the one previously shown to us. It includes massacres of Christians [by Jews]; mock repetitions of the crucifixion of Jesus that usually took place on Purim; cruel murders within the family; liquidation of informers, often done for religious reasons by secret rabbinical courts, which issued a sentence of “pursuer” and appointed secret executioners; assassinations of adulterous women in synagogues and/or the cutting of their [the women’s] noses by command of the rabbis. Rosen included in his long article many well-documented cases of massacres of Christians and mock repetitions of the crucifixion of Jesus on Purim, most of which occurred either in the late ancient period or in the Middle Ages. (Some isolated cases occurred in sixteenth-century Poland.)

Shahak added: “Rosen included in his long article many well-documented cases of massacres of Christians and mock repetitions of the crucifixion of Jesus on Purim, most of which occurred either in the late ancient period or in the Middle Ages.”

53 Mosques and Churches Vandalized in Israel Since 2009, but Only 9 Indictments Filed – Ha’aretz