Protesters burn tires near the fence of the Gaza Strip border with Israel during a protest east of Gaza City, Friday, Oct. 26, 2018. (AP Photo/Adel Hana)

Four Palestinians were killed Friday by Israeli military fire during protests at the Gaza-Israel border, as was another in clashes in the West Bank, Palestinian authorities said.

At least four Palestinians were killed and many others injured by live bullets or sustained suffocation from teargas inhalation on Friday as Israeli forces continued attacked the Great March of Return protests at Gaza-Israel border, according to the Ministry of Health.

The forces fired live bullets and rubber-coated steel rounds at the protesters who gathered at many encampments along the border, killing four protesters and injuring many others.

Some of the wounded were moved to hospital and others were treated in the field hospitals.

More than 205 Palestinians have been killed and over 22,000 others injured by Israeli forces since the outbreak of the Great March of Return protests at Gaza border on March 30.

Most of the casualties occurred on May 14 when Israeli forces attacked Palestinian protesters marking the 70th anniversary of Israel’s occupation of historical Palestine and the ensuing ethnic cleansing of half a million Palestinian refugees.

Thousands of Palestinians gathered along the fence, burning tires and throwing rocks and firebombs at Israeli troops who respond with tear gas and occasional live fire.

Another Palestinian young man succumbed to his wounds on Friday evening, only few hours after he was shot and critically injured by Israeli occupation forces in the village of Mazra’a al-Gharbiya, near Ramallah in the West Bank.

The Ministry of Health said Othman Ahmad Ladadweh, 33, a father of two, succumbed to his wounds after he was shot by live bullets by the Israeli forces in the village.

Eight other Palestinians were also injured, two of them seriously, by the Israeli forces as the latter cracked down on dozens of demonstrators who were protesting in the village against illegal Israeli settlement activities.

The forces also attacked with teargas journalists who were reporting from the village and banned them from covering the events.

For a list of Palestinians and Israelis killed see this timeline. 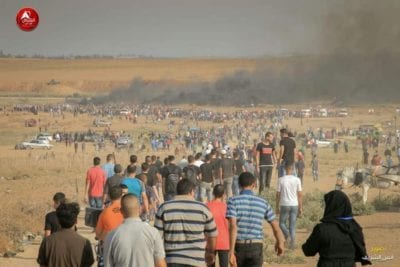